Solar power is contagious. These maps show how it spreads. 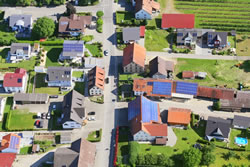 Brad Plumer for VOX:  Rooftop solar is expanding rapidly in the United States — by some estimates, a new system goes up every four minutes. There are plenty of reasons for that, from falling prices to generous federal subsidies to innovative leasing schemes.

But there's another, little-discussed factor here: Residential solar power is contagious. Yep, contagious. Studies have found that if you install solar photovoltaic panels on your roof, that increases the odds that your neighbors will install their own panels.

SolarCity, the largest solar installer in the United States, just published some fascinating data on this "contagion" effect. The company has installed 230,000 rooftop systems nationwide (often by allowing customers to lease panels rather than buy them upfront). It says fully one-third of customers were referred by a friend or neighbor.

SolarCity has also made some neat animations showing the "contagion" effect in action.  View here: