Run solely on renewable energy sources, every aspect of the home's design was calculated to conserve energy and capture as much of the sun's energy for heat in the winter and cooling in the summer.

The Three Major Methods of Designing a Rooftop Solar System

During the sales and planning phases of a residential rooftop solar project, different methods are used to figure out how to lay out the solar modules on a roof. We will talk about three methods that solar professionals often use during this phase.

Located in Memphis on the banks of the Mississippi River, the civitas home project is a 2,800-square-foot residence that aims to be one of the first homes in America to be certified Zero Emissions, Zero Energy, and Reveal, along with attaining LEED Platinum certification. The amount was a 2 percent decrease from 2017. However, the forecast shows the market rebounding in the years ahead, according to the newly released U.S. Solar Market Insight 2018 Year-in-Review Report from Wood Mackenzie Power & Renewables and the SEIA.

Trends in the Residential Solar Industry

By storing clean solar power in a battery, people can use that power at night when the sun isnt shining, withstand power outages that are growing in frequency, keep the grid stable during times of high usage, and make 100% renewable, clean energy achievable.

With the support of industry leaders, the Solar Energy Industries Association (SEIA) and The Solar Foundation today are unveiling the Solar Automated Permit Processing (SolarAPP) initiative, which will streamline permitting and slash the cost of solar installations. 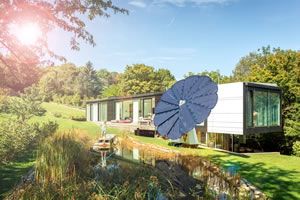 Megan Barber for Curbed: Based off the concept of how a sunflower follows the sun, the Smartflower is a portable, adjustable petal system that tracks the suns path throughout the day. When the sun rises in the morning, the Smartflower automatically unfolds and begins producing energy by setting its petals at a ninety-degree angle. The flower goes "back to sleep" into a folding position at night or whenever high winds make it unsafe to operate.

Solar power is contagious. These maps show how it spreads. Brad Plumer for VOX :  Rooftop solar is expanding rapidly in the United States — by some estimates, a new system goes up every four minutes. There are plenty of reasons for that, from falling prices to generous federal subsidies to innovative leasing schemes. But there's another, little-discussed factor here: Residential solar power is contagious. Yep, contagious. Studies have found that if you install solar photovoltaic panels on your roof, that increases the odds that your neighbors will install their own panels. SolarCity, the largest solar installer in the United States, just published some fascinating data on this "contagion" effect. The company has installed 230,000 rooftop systems nationwide (often by allowing customers to lease panels rather than buy them upfront). It says fully one-third of customers were referred by a friend or neighbor. SolarCity has also made some neat animations showing the "contagion" effect in action.   View here: By Daniel J. Graeber for UPI.com:  Small-scale solar installations in the United States account for about a third of the overall capacity on the grid, a report from the federal government said. The U.S. Energy Information Administration estimates total U.S. solar-power output in September, the last full month for which data are available, at 3.5 million megawatt hours. Of that, just more than 30 percent came from small-scale solar installations. "Generation from roof-top photovoltaic systems has become an increasingly important part of total solar generation in the United States," EIA AdministratorAdam Sieminski said in an emailed statement. A September report from the Solar Energy Industries Association, with support from green energy market adviser GTM Research, found second quarter residential solar capacity grew 70 percent year-on-year to 473 megawatts.   Cont'd... Energy free residences are not only practical but they are the dwellings of the future. Let's hope that home builders start thinking zero net energy as they design upcoming housing subdivisions. This article explains: some background to our bungalow design, why we had the original mechanical ventilation and heat recovery system installed; why we chose the latest system and our experience with both systems.

What Size Air Conditioner Do I Need?

04/05/10, 09:55 AM | Solar Power | Residential
Many people mistakenly buy larger air conditioning units than they need because they believe that a larger unit will both operate and cool their house more efficiently. In truth, a larger unit could be less efficient.