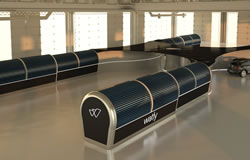 Clinton Nguyen for Tech Insider:  Marco Attisani wants his company to be the first to win the Nobel Peace Prize. It's a lofty goal for a 10-person startup, but Attisani is sure that the solar-powered water filtration systemsthey're producing will earn a spot on the shortlist.

The filtration machines manufactured by Attisani's Italian company, Watly, are covered in photovoltaic panels that feed electricity into internal batteries. This allows the systems to be installed in the world's most remote locations, free of the need to connect to a power grid. The 40-foot-long, 15-ton units also serve as Wi-Fi hubs and charging stations.

Each machine can process 5,000 liters of drinking water each day and provide Wi-Fi access within a half-mile radius, according to CNN . The team claims the units will last roughly 10 years before they require maintenance.

Watly tested two units in its production facility in Talmassons, Italy in 2013 and 2014 before piloting a unit in rural Ghana in 2015. The company has also started an Indiegogo campaign to help fund an expansion into Sudan and Nigeria.   Cont'd...