A better way of converting coffee waste to biofuel? 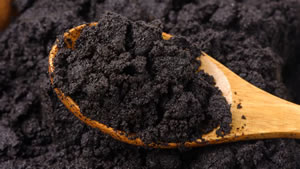 Ben Coxworth for New Atlas:  Used coffee grounds can already be turned into things such as water filters, road material, carbon-capture media, and biofuel. Unfortunately in the case of the latter, it's a fairly complex affair, making its widespread use unlikely. That could be about to change, however, as scientists from Britain's Lancaster University have simplified the coffee-grounds-to-biofuel conversion process.
First of all, the vast majority of used coffee grounds are still just thrown away.
Of those that are converted into biofuel, though, the process typically starts with the grounds being mixed with hexane and then heated to 60 ºC (140 ºF) for one to two hours, to extract oils from them. Next, the hexane is evaporated, leaving the oils behind. Methanol and a catalyst are then added to create biodiesel, although glycerol is also created as a by-product. In a final step, it must be separated from the biodiesel.  Full Article: