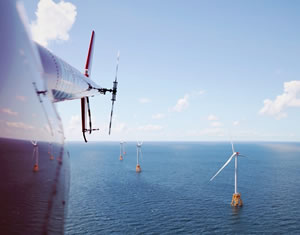 Block Island officials on Monday switched on a connection between the island and a cable linking the wind farm to Rhode Island’s mainland power grid. The connection allowed the island’s only electricity source — a small diesel-fueled power plant — to shut down. The island’s 2,000 residents burned about 1 million gallons of diesel fuel annually.

“The emissions that go along with nearly a million gallons of diesel a year — that’s all going to go away,” said Jeff Wright, chief executive of the Block Island Power Co.

Diesel releases more carbon dioxide into the atmosphere than any other common petroleum-based fuel except for residential fuel oil, according to the EPA. Less than 1 percent of electricity in the US is generated using liquid petroleum, including diesel.

Until now, Block Island’s power grid was completely isolated from the mainland. The construction of the wind farm and its connection to the mainland allowed the island to connect to the New England power grid for the first time.  Full Article: