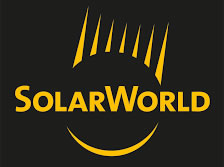 Shares in SolarWorld, which employs around 3,000 people and was once Europe's largest solar panel maker, plunged about 80 percent on Thursday after the group said it would file for insolvency.

"This is a bitter step for SolarWorld, the management board and staff and also for the solar industry in Germany," said Chief Executive Frank Asbeck, known as the "Sun King" in the German solar industry's heyday.