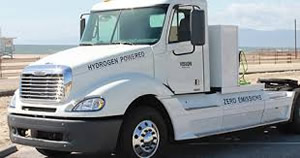 Science Daily:  Heavy-duty trucks will soon be driving around in Trondheim, Norway, fuelled by hydrogen created with solar power, and emitting only pure water vapour as "exhaust."  Not only will hydrogen technology revolutionize road transport, it will also enable ships and trains to run emission-free.

Norway's role as a pioneer in the field of hydrogen technology started more than a century ago at a waterfall. In the steep mountain valley of Rjukan, an engineer and a businessman recognized the potential of the Vemork hydroelectric power station as a way to ensure food production for an ever-growing population. Kristian Birkeland and Sam Eyde wanted to build a factory to manufacture Norwegian fertilizers under the brand name "Norsk Hydro." An architecturally futuristic hydrogen factory was built next to the power station. After its completion in 1929, it became a tourist attraction between the steep mountains of Rjukan.

Since then, most Norwegian hydrogen research has been conducted in various laboratories at Gløshaugen in Trondheim. In 1951 the Norwegian University of Science and Technology (NTNU), then known as the Norwegian Institute of Technology (NTH), established its own electrochemical engineering institute. This research community has played a key role in what has become a major Norwegian electrochemical industry. Today, behind closed doors at SINTEF, top secret technology is being developed -- funded by a number of Norwegian and international industrial companies, including the suppliers of electrolysis technology for hydrogen production. Recently, NTNU and SINTEF won a contract with a manufacturer of fuel cell electric vehicles that run on hydrogen and emit only water vapour.  Full Article: