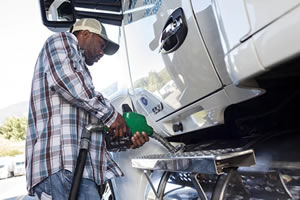 Edd Gent for Scientific American:  A new way of refining biodiesel so that it works in standard diesel car engines could help broaden the use of renewable fuels, according to scientists.

Biodiesel made from plant material could present a more eco-friendly alternative to the fossil-fuel-derived diesel, or petrodiesel, that is currently used. In the European Union (EU), commercial diesel already has to contain at least 7 percent biodiesel.

But the molecular makeup of these fuels means they boil at different temperatures from petrodiesel, which means only specially designed engines can run on pure biodiesel or blends that contain considerable amounts of the fuel. [Top 10 Emerging Environmental Technologies]

Now, scientists in Germany have found a way to transform chemicals derived from plants into a biodiesel that meets the boiling characteristics required by the EN 590 standard, set by the European Committee for Standardization, for commercial diesel sold in the EU.

Lukas Gooßen, a professor of organic chemistry at the Ruhr-Universität Bochum who led the research, said his motivation came during a trip to a biodiesel plant in Rwanda a few years ago. The problem, he said, was that only a single bus had been converted to run on the fuel because of a lack of funds.  Full Article: