U.S. Reports a Major Milestone in Wind and Solar Power 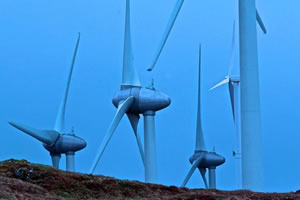 Bobby Magill for Scientific American:  Ten percent of all of the electricity generated in the U.S. in March came from wind and solar power, marking the first such milestone in U.S. history, according to a new U.S. Energy Information Administration report.

The EIA estimates that wind and solar farms likely generated 10 percent of America’s electricity in April as well, which would be another first, according to the report.

This year’s milestone shows that renewables are becoming a major source of electricity in the U.S. and can no longer be considered “alternative” energy, said Christopher Clack, CEO of the power grid modeling firm Vibrant Clean Energy and a former National Oceanic and Atmospheric Administration researcher.

The report’s findings represent a marked increased from March 2016, when wind and solar generated 8.6 percent of total U.S. electricity. Overall, about 7 percent of U.S. electricity comes from wind and solar annually, up from less than 1 percent a decade ago. Texas is the country’s biggest wind power producer and California is the largest solar producer.  Full Article: