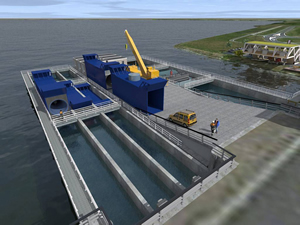 NauticExpo:  The VAWT will be installed at the country’s new Tidal Technology Center Grevelingen, due for completion in late 2017/early 2018. Water2Energy (W2E) has signed a technical development partnership with Dutch electrical system integrator Bakker Sliedrecht to further develop and deliver such turbines.

The position of the turbine blades is continuously modified such that they always receive the full force of streaming water. The resulting efficiency is enhanced by Bakker Sliedrecht’s design for the conversion of mechanical to electrical energy via a special set of gearboxes and generators. The company also created a smart system that delivers the electrical power to the grid.

“W2E concluded that a better, tailor-made energy conversion system would be required to have the turbine running at the best efficiency point,” a Bakker Sliedrecht spokesman explained to NauticExpo e-magazine.

“The control system will be fully automatic and keep the load off the turbine at a maximum during the ever-changing tidal current flow. Even in the case of potential overloads due to extreme tidal differences, the system will be able to control the turbine and protect it.”