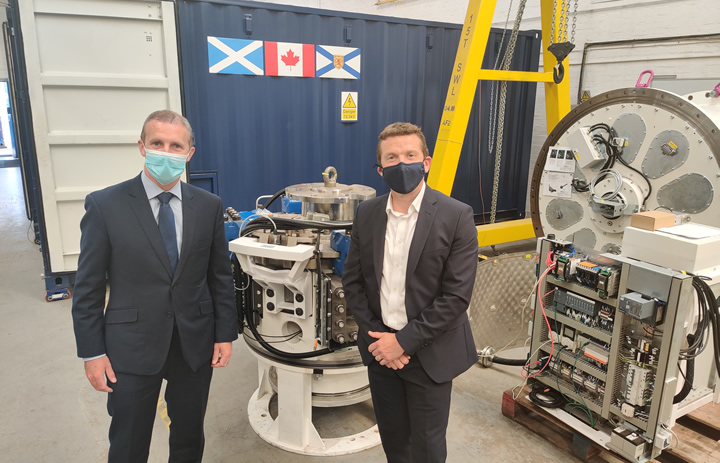 Protecting submerged turbines from their marine co-habitants isn't the only step tidal power plants should take. Sudden changes in water flow can be equally challenging for tidal turbines.

The Future of Offshore Renewable Energy

02/20/18, 09:37 AM | Solar Power, Other Renewables | Analysis and Trends, Tidal Energy, Wave Energy | Emily Folk - Contributing Author
While offshore wind has come the farthest and gets the most attention, there are other offshore generation resources that may start making waves in the near future too. 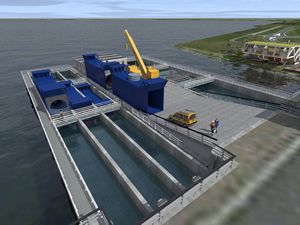 NauticExpo: Developed by Netherlands-based Water2Energy, a vertical axis water turbine (VAWT) with an innovative pitch control system is proving from 30% to 50% more efficient than traditional systems.

02/24/17, 05:48 AM | Other Renewables | Tidal Energy
Under contract and in partnership with Atlantis, Lockheed Martin designed the 1.5 megawatt AR1500 turbine. In addition to system design, Lockheed Martin developed, manufactured and delivered two innovative subsystems, the Yaw Drive System (YDS) and the Variable Pitch System (VPS). The two elements enable the turbine to rotate autonomously around its base, so it always faces into the tidal flow. The pitch angle of the turbine blades also adjusts to optimize the power generation in a given tidal stream.

Tidal Power Can Make the U.K. a Green Energy Leader

Mark Gilbert for Bloomberg:  The U.K. government is mulling whether to support a 1.3 billion pound  ($1.6 billion) proposal to build a tidal lagoon in South Wales. It should stop dithering and subsidize the project to help meet the country's green energy goals, produce cheaper power, and establish Britain as the world leader in technology that harnesses the power of the tides to generate electricity. The U.K. lost its energy independence in 2004, and now depends upon imports to meet about half of its energy needs. And while the contribution from renewable energy sources has climbed to a bit less than 10 percent from about 1 percent at the start of the last decade, the U.K. commitment to reduce carbon emissions to 57 percent of their 1990 levels by 2030 means even less electricity needs to come from coal-fired power plants.   Cont'd...

The First Tidal Generator in North America Is Now Online

Avery Thompson for Popular Mechanics:  The first tidal generator in North America has gone online this month in the Bay of Fundy, and is expected to generate enough electricity to power 500 homes. While most hydro generators harness the energy of falling water, or the energy of the waves, tidal power uses the energy of the high and low tides. At the Bay of Fundy in Nova Scotia, which has the largest tides in the world, that energy is being harnessed to generate 2 megawatts of electrical power. In the Bay of Fundy, the difference between high and low tide is about 56 feet. Approximately 115 billion tons of water flow in and out of the bay every tidal period. Two renewable energy developers, OpenHydro and Emera, decided to build turbines on the seafloor that could harness that power.   Cont'd...

Minesto's tidal energy technology awarded as most promising in the industry

11/23/16, 05:52 AM | Other Renewables | Tidal Energy
On Tuesday evening, in a global competition of the most prominent players in the industry, leading tidal energy developer Minesto won the award for the Most Promising Turbine Concept at the International Tidal Energy Summit in London.

Tidal demonstrator to be built by HydroQuest and the CMN group

11/21/16, 05:18 AM | Other Renewables | Tidal Energy
Implemented with support from the University of Caen Normandie, this project involves installing an ocean-based 1 MW hydrokinetic tidal turbine at the Paimpol-Br©hat site, as part of an agreement with EDF, from the second half of 2017.

11/15/16, 09:01 AM | Other Renewables | Tidal Energy
The 30MW project, to be created off the Isle of Wight, will allow long-term operation of SCHOTTEL HYDRO and TOCARDO turbine arrays, simultaneously optimising their performance and delivering reliable electricity to the grid. PTEC is also expected to create and safeguard hundreds of jobs and attract significant investment into the local economy, building on the success of the existing British marine and offshore wind sectors.

10/17/16, 05:29 AM | Other Renewables | Tidal Energy
In an important step for this emerging form of renewable energy, a tidal energy turbine has been installed in the Tamar estuary in Launceston, Tasmania, as part of a project to investigate and optimise the device's performance.

Martin Hannan for The National:  HOUSEHOLDERS on the Shetland Isles were not aware of it, but when they plugged in their kettles recently, they were sharing in a bit of history. For the Shetland Tidal Array at Bluemull Sound, installed by Nova Innovation of Edinburgh, has become the world’s first tidal power array to be connected to a grid and deliver power on a commercial basis – to dozens of homes on the islands. The achievement has been hailed by environmentalists and the renewable industry as a turning point in the development of marine power. Nova had shown its technology could work with a single turbine which generated electricity in March. But the installation of second turbine that is also working to the grid proves that large tidal power arrays can and do work. Commercially viable tidal power is seen as something of a Holy Grail by the industry, since it is one of the few renewable energy sources that is entirely predictable – as one industry source once put it: “there will be tidal power available as long as the moon is in the sky”.  Cont'd...

Eliminate Solar Rack Ballast and Reduce Rooftop Material Handling. PowerGripâ„˘ Universal (PGU) is a commercial roof mount system designed to secure solar racks and other equipment to any type of commercial roofing system. PGU provides a secure connection directly to the roof deck or structural members and is designed to reduce or eliminate ballast in solar racking systems, so there's less weight on the roof and less material handling. Made of heavy-duty cast aluminum, PGU units include a base ring which is secured through the roofing cover and into the structural roof deck, and a waterproof top plate.
More Alternative Energy Products | Feature Your Product