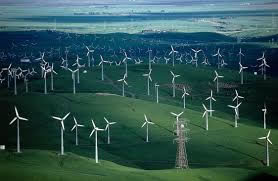 Jess Shankleman for Bloomberg Technology:  Europe’s wind power industry may attract 351 billion euros ($417 billion) of investment by 2030 if countries adopt reforms and targets for their energy systems in the next year, trade association WindEurope said.

The European Union may create 716,000 jobs with a target for member states to produce 35 percent of their energy from renewables within 12 years, the Brussels-based group said in a biannual report setting out scenarios for the industry.

Wind power currently supplies about 10 percent of Europe’s electricity, and falling costs of technology are making it an increasingly viable alternative to fossil fuels, the group said. Even offshore wind, once the most expensive form of mainstream renewables, saw zero-subsidy contracts awarded in Germany this year.

“It is a realistic goal but it depends on how fast energy reform takes place,” Ivor Catto, chief executive officer of RES Group and chairman of WindEurope, said before the report was released on Tuesday. “The technology is moving apace.”  Full Article: