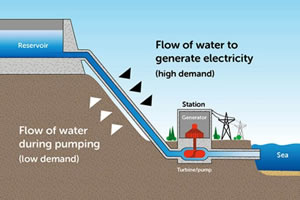 Stephen Smiley and Caroline Winter for ABC AU:  Australia has the capacity to store up to 1,000 times more renewable energy than it could ever conceivably need, according to an analysis by researchers at the Australian National University (ANU).

ANU engineering professor Andrew Blakers has conducted a study looking into pumped hydro sites and has concluded that there are at least 22,000 suitable locations nationwide.

Professor Blakers said if storage was built at just a tiny fraction of those places, Australia could transition to 100 per cent renewable power within two decades.

"No matter where you are in Australia, you will find a good pumped hydro site not very far away from where you, or your wind or your solar farm is located," he said.  Full Article: