Joi Scientific,™ whose mission is to make clean and affordable hydrogen energy available to all, is to co-develop with New Brunswick Power a hydrogen production system to enable the world’s first electricity grid that uses hydrogen as a baseload. 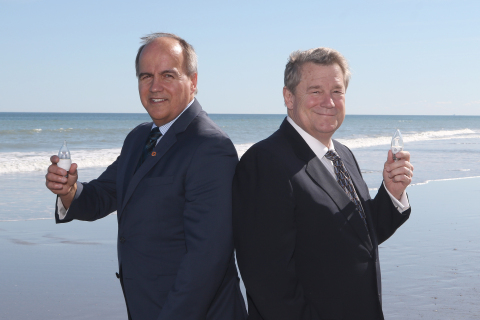 The major electric utility in Canada’s Eastern Maritime province, NB Power is re-architecting its operations to create a highly efficient and green electricity grid. The collaboration envisages the deployment of Joi Scientific’s proprietary Hydrogen 2.0™ production system at multiple distributed stations alongside wind turbines, hydro, and nuclear power to create a net-zero carbon-generating power operation while maintaining low and stable rates in a jurisdiction that does not benefit from large storage hydro capacity. The joint commercial development between Joi Scientific and NB Power foresees the utility offering its emissions-free grid architecture, which combines distributed Hydrogen 2.0 baseload generation with smart grid management, to other utility operators across North America and beyond.

Joi Scientific’s Hydrogen 2.0 technology uses a high efficiency, high throughput system to liberate hydrogen from untreated seawater. Hydrogen 2.0 will enable the localized production of hydrogen on-site, on-demand, meaning that it can be generated when and where it is needed closer to where customers are located. In the province of New Brunswick ― where significant progress has already been made towards contributing to Canada’s 2030 goal of cutting emissions by at least 56 percent below 2005 levels ― Hydrogen 2.0 has the potential to transform the transmission and distribution of electricity with a feedstock generated from readily available coastal seawater.

“NB Power has long been committed to investing in the sustainability of our province’s energy future. We are encouraged with the progress made to date on Hydrogen 2.0 and are looking forward to the next phase of co-development,” explained Gaëtan Thomas, President and CEO, NB Power. “Hydrogen 2.0 has the potential to provide a localized, on-demand hydrogen production capability which, when mixed with other renewable sources such as wind and hydro, gets us closer to our customers by delivering zero-carbon loads at lower cost and greater efficiency.”

This new development phase follows successful third-party verifications of Hydrogen 2.0 technology efficiency and throughput by scientific institutions and experts. Both companies are planning to work closely together to co-develop and test a commercial prototype unit at Joi Scientific’s labs at the Kennedy Space Center. This development phase follows an initial license agreement that was signed in 2016, granting NB Power the rights to develop, manufacture, use, and sell hydrogen and hydrogen generation systems for large and small electric utility applications using Joi Scientific’s Hydrogen 2.0 technology.

“This historic agreement with NB Power signals the transition of our Hydrogen 2.0 technology from the laboratory into full-scale development and commercialization,” said Traver Kennedy, CEO, Joi Scientific. “New Brunswick is a prime example of what can be achieved by a far-sighted, ecologically-minded institution. Their innovative approach for realizing a new zero-carbon distributed grid architecture could provide the blueprint for the way the world generates and consumes electricity going forward.”

New Brunswick Power (www.nbpower.com) is the primary electric utility in New Brunswick, Canada, and was established in 1920. It serves over 400,000 direct and indirect customers with safe, reliable and efficient electricity. The utility is focused on promoting the efficient use of energy in customers’ homes and businesses through its smart grid efforts while enabling and providing new, value-added energy efficient solutions in order to help reduce carbon, better integrate renewable energy and stimulate the economy. Based on the current generation mix, NB Power is well positioned to provide its customers with electricity generated with consideration for the environment. Currently, 37 percent of its energy is from renewable sources and 74 percent is non-emitting when the Point Lepreau Nuclear Generating Station is added. NB Power is on track to achieve the provincial target of 40 percent of in-province electricity sales being provided from clean, renewable energy sources by 2020 and when coupled with nuclear generation this will result in a 75 percent non-emitting grid for New Brunswickers.

Joi Scientific (www.joiscientific.com) was founded by a group of global business leaders, technologists, and social entrepreneurs who believe that plentiful hydrogen holds the key to giving the world a viable, no-compromise energy alternative. The company’s Hydrogen 2.0 technology has the potential to be the world’s first hydrogen production process that is on-demand, economically competitive, and environmentally neutral. The company is licensing its Hydrogen 2.0 technology to a wide range of major power industries including electrical generation, heat generation, transportation, and specialty power. Joi Scientific is headquartered at the Kennedy Space Center in Florida.