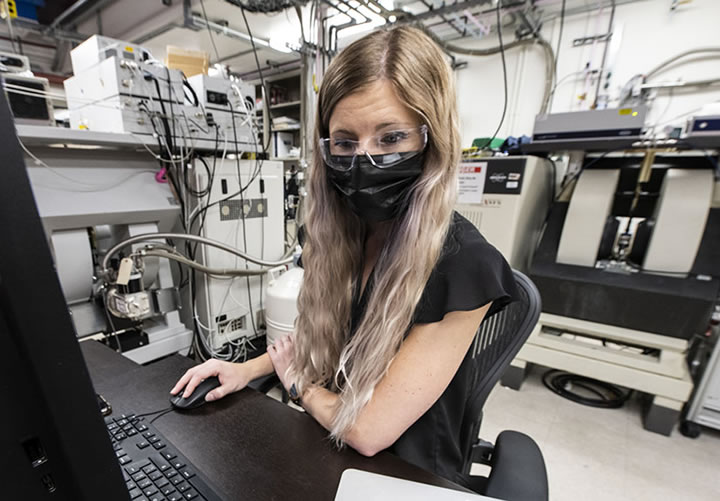 Abigail Meyer, a Ph.D. candidate at the Colorado School of Mines and National Renewable Energy Laboratory, is the lead author of a new paper detailing efforts to pinpoint the source of the LID phenomenon. Photo by Dennis Schroeder, NREL

Researchers at the U.S. Department of Energy’s National Renewable Energy Laboratory (NREL) and Colorado School of Mines are applying a new technique to identify defects in silicon solar cells that cause a drop in efficiency. The lessons learned at the atomic level could lead to improvements in the way manufacturers strengthen their products against what is known as light-induced degradation.

Light-induced degradation, or LID, shaves the efficiency of silicon solar cells by about 2%, which adds up to a significant drop in power output over the 30- to 40-year lifespan of the technology deployed in the field. Solar cells made from silicon account for more than 96% of the global market, and the most commonly used semiconductor used in the manufacture of these cells is made from boron-doped silicon. But boron-doped silicon is susceptible to LID, so manufacturers have developed methods to stabilize the solar modules.

Without an understanding of the defects at the atomic level, the researchers said it is impossible to predict the stability of those modules.

“Some of the modules are stabilized completely. Some of them are only half-stabilized,” said Abigail Meyer, a Ph.D. candidate at Mines and a researcher at NREL. She is the lead author of a new paper detailing efforts to pinpoint the source of the LID phenomenon. The article, “Atomic Structure of Light-Induced Efficiency-Degrading Defect in Boron-Doped Czochralski Silicon Solar Cells,” appears in the journal Energy & Environmental Science.

Her co-authors are Vincenzo LaSalvia, William Nemeth, Matthew Page, David Young, Paul Stradins, all from NREL; Sumit Agarwal, Michael Venuti, and Serena Eley, who are from Mines; and P. Craig Taylor, a retired Mines professor who consulted on the research.

Stradins, a principal scientist and a project leader in silicon photovoltaic research at NREL, said the problem of LID has been studied for decades but the exact microscopic nature of what causes the degradation has not been determined. Researchers have concluded, through indirect experimentation and theory, that the problem decreases when less boron is used or when less oxygen is present in the silicon.

The collaboration between NREL and Mines researchers relied on electron paramagnetic resonance (EPR) to identify defects responsible for the LID. For the first time, the microscopic examination revealed a distinct defect signature as the sample solar cells became more degraded by light. The defect signature disappeared when the scientists applied the empirical “regeneration” process to cure the LID that industry has adopted. To their surprise, the researchers also found a second, “broad” EPR signature affected by light exposure, involving many more dopant atoms than there are LID defects. They hypothesized that not all atomic changes induced by light lead to the LID.

The techniques developed to study LID can be extended to reveal other types of degrading defects in silicon solar cells and in other semiconductor materials used in photovoltaics including cadmium telluride and perovskites, the scientists noted.

The Solar Energy Technologies Office within the Department of Energy funded the research.

NREL is the U.S. Department of Energy's primary national laboratory for renewable energy and energy efficiency research and development. NREL is operated for DOE by the Alliance for Sustainable Energy LLC.