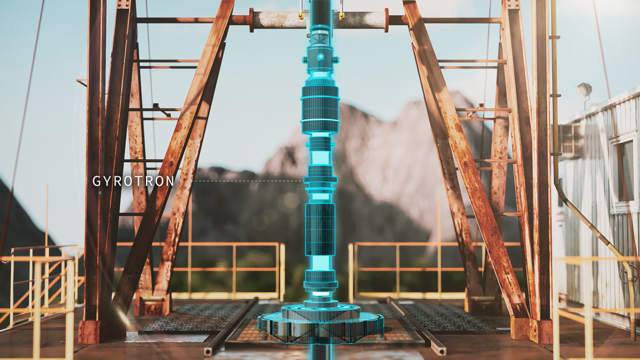 Artist’s rendering of the gyrotron device that is a key component of Quaise Energy’s geothermal drilling rig. The gyrotron, long used in fusion research, will produce millimeter energy waves to vaporize rock at great depths. Among other applications, the technology could enable the conversion of coal plants around the world to the production of clean baseload energy. Credit: Quaise Energy

As the world moves away from fossil fuels in the battle against climate change, could coal plants be repurposed to produce renewable geothermal energy? Panelists addressing the topic at PIVOT2022, a recent weeklong geothermal conference, were excited about that potential, citing the number of enabling technologies that are coming online and the escalating interest in the heat beneath our feet.

After a wide-ranging discussion that covered everything from the size of the potential market to a novel drilling tool that could allow access to the mother lode of geothermal energy, moderator Alex Fitzsimmons, a senior director with  ClearPath, brought the group back to the title of the session, “Converting Coal Plants to Geothermal: On the Horizon or Science Fiction?”

“A lot of the technology advances [needed] are coming into that proof step where you’ll have physical proof that they work. So I would say we are ready to launch, if we can just bring together the right utility, the right contract and engineering expertise, and the right site to launch the proofs to show that this can be done,” said Ken Wisian, a geothermal geophysicist and associate director of the Bureau of Economic Geology at the University of Texas, Austin. “The picture could be accelerating dramatically over the next few years. We just need the proof projects to land.”

Neeraj Nandurdikar is a senior vice president with Wood Mackenzie, a global energy research and consulting firm. He began the session by outlining the potential opportunity, noting that there are about 4,200 coal plants around the world, of which about 1,000 appear to be retired. Most (some 2,200, of which 2,000 are operational) are in China, which also has 84 plants under development.

The US is next with around 750 plants, of which about 200 are operating (no new projects are under construction). India, Indonesia, and Germany round out the top five countries with the most coal plants. Many plants in the US, he said, are idle or shut down because of the lack of economic incentive. “So from our vantage point, the opportunity is big if something can be done with these assets.”

John Kosub is a senior director at CPS Energy, a utility serving the San Antonio area. He made a similar point. CPS has made huge investments in the equipment associated with producing power from coal, such as steam turbines and grid interconnection, “so reusing those investments has a significant cost advantage,” he said.  Continuing to use the workforce “would be [another] big advantage.”

Coal plant conversions and greenfield geothermal operations, or those built from scratch, could also “take advantage of the existing oil and gas workforce and completely pivot it to this purpose,” said Kevin Bonebrake, CFO for Quaise Energy. Bonebrake noted that the majority of Quaise employees have an oil and gas background, including co-founder and CEO Carlos Araque. [Araque was among the winners of a PIVOT2022 Five on Fire award recognizing geothermal catalysts of the year.]

Where do we start?

Where are the most promising areas for a coal to geothermal conversion?

“The hotter the better,” said Wisian. That means focusing first on coal plants that are close to the superhot rock relatively near the Earth’s surface that can be found in places like the Western US, Iceland, and near volcanoes.

For most of the world, however, such superhot rock isn’t accessible. It’s too far down, at ten to 20 kilometers (about 12 miles). The conventional drill bits used in the oil and gas industry can’t withstand the extreme temperatures and pressures at those depths.

Bonebrake explained how Quaise’s new drilling technology could change that “by enabling you to get deeper and hotter than anybody has been able to go before.”

That’s important, he said, because water at those temperatures and pressures (greater than ~700 degrees F and 220 times atmospheric pressure) enters a supercritical phase, where it behaves like a super dense steam. Supercritical water, in turn, can carry some 5-10 times more energy than regular hot water, making it an extremely efficient energy source. “When you think about taking that energy density and dividing it by the cost to develop a [geothermal] field, you see a step change in economics to geothermal,” Bonebrake said.

Earlier, Wisian noted that “getting to the level of energy density of a coal power plant is going to be difficult for geothermal…unless you get to super deep, supercritical situations.”

To reach those conditions, Quaise replaces the conventional drill bits that mechanically break up the rock with millimeter-wave energy (cousins to the microwaves many of us cook with). Those millimeter waves literally melt then vaporize the rock to create ever deeper holes. An inert gas that accompanies the millimeter waves brings the vaporized rock back up to the surface.

Bonebrake explained that a single module of the final system would consist of three deep wells: one that injects water, and two others to collect the heated water and carry it to the surface. The heated water is then used to generate electricity in the power plant, after which it is recirculated back down the injection well to repeat the cycle.

Wisian applauded the many geothermal technology developments described at the conference, but stressed that “you can’t ignore the geology. It’s just like, no matter how great a new jet you have, if you’re going somewhere you need as detailed a forecast of the weather at your landing site as possible.” Fortunately, “that old-fashioned geologic detective work” is common to the oil and gas industry. “I’m interested in transitioning that methodology and mindset into…geothermal.”

A member of the audience asked if there’s a need for a screening tool with technical, financial, and regulatory aspects that can help utilities assess their options. “Yes,” said Wisian. “A publicly accessible or shareable modeling tool would be a significant step forward.”

Nandurdikar of Wood Mackenzie said that such a tool is being developed by his firm and Quaise. Among other things, they’ve already mapped all the coal plants in the US with a pinpointed assessment of the geothermal attractiveness at each site.

Fitzsimmons concluded the session by noting that “finally geothermal is starting to get some of the attention that it deserves. We just have to keep pushing forward.”

All PIVOT2022 sessions were taped and are available on the web.

—Elizabeth Thomson is a correspondent for Quaise Energy.