Terry Macalister for The Guardian:  Ministers rightly wring their hands over the 2,200 jobs being lost at the 98-year-old Redcar steelworks hit by low-cost Chinese competition. But they seem deaf to warnings of 27,000 jobs being potentially lost in a brand-new industry now facing crisis due to their own clumsy cuts. Almost 1,000 redundancies have already been made by the solar panel installersMark Group and Climate Energy. No one in the industry believes this will be the end of the sad story. The latest flashpoint for “green” developers is the government plan to slash the feed-in tariff – which subsidises people installing solar panels on their home – by almost 90%. Meanwhile, an energy-efficiency regime has been scrapped with only a vague promise of a future replacement. If these were isolated examples, then companies might be willing to hang on in the hope of better things to come. But they are the latest in a series of cuts not just to solar but also to onshore wind, and come at a time when it seems maximum effort is being expended on removing roadblocks to shale-gas frackingand nuclear power. Cont'd...

07/30/15, 12:30 PM | Solar & Wind, Other Energy Topics | Education and Training, solar jobs
The two-week August 2015 solar course was offered as a one-time scholarship for the first 16 students, who applied and qualified with their military DD215. Within a week of the offer being made public, the course has been filled and a wait list begun. 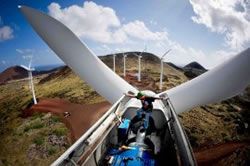 Joshua S Hill for CleanTechnica:  A new report has determined that investments in energy-efficient and renewable energy sources yield more jobs for a set amount of spending than investing in maintaining or expanding the fossil fuel industry. [wind turbine cowboy jobs] The report, Global Green Growth: Clean Energy Industrial Investment and Expanding Job Opportunities, was published earlier this week and presented at the Vienna Energy Forum 2015 by its two authors, the Global Green Growth Institute (GGGI) and the United Nations Industrial Development Organization (UNIDO). “Significant progress has already been made in overcoming the hitherto conventional wisdom that taking steps to cut GHGs is incompatible with economic growth,” said Yvo de Boer, Director-General of GGGI. “This report moves the debate another positive step forward by showing that employment and development result from sustainable, green growth.”

06/01/15, 10:32 AM | Solar & Wind, Other Energy Topics | employment, solar jobs
The course beginning June 8th, 2015, is designed to empower veterans to immediately qualify for jobs within the solar industry. It concludes with the NABCEP Entry Level Exam and customized placement services with local, regional and national solar firms.

Renewable Energy Corporation, a Baltimore solar panel installer, created the graphic below to show how Maryland and Virginia measure up against each other.

Panasonic's Total Home Energy System is built to deliver. The same battery technology we use to power the world's most advanced electric cars is now available to power your home. But it doesn't stop there. The all-in-one renewable energy system pairs Panasonic solar panels with Evervolt™ batteries to offer your customers a complete solar + storage solution, manufactured and warrantied by a company you know you can trust. In stock now.
More Alternative Energy Products | Feature Your Product