It's not often we associate something that consumes power-such as lighting-as a means to saving or conserving, but by their inherent design and very purpose, lighting controls are a way to not only save electricity and related costs, they're a fun, convenient and futuristic way to go about it.

It's not often we associate something that consumes power-such as lighting-as a means to saving or conserving, but by their inherent design and very purpose, lighting controls are a way to not only save electricity and related costs, they're a fun, convenient and futuristic way to go about it.

People install comprehensive lighting control systems in their homes for any number of worthwhile reasons. Convenience is one of the most common. For many people, having the ability to operate lights and to easily alter lighting in different rooms to accommodate various activities by simply pressing a button isn't a mere luxury, it's a necessity. In other instances, people appreciate having total control over every light in their home at their fingertips. Imagine getting into bed at night and wondering whether or not you turned off a light in the kitchen or den. With certain lighting control systems, one glance at a master control on your nightstand would provide your answer, and also allow you to turn off the light in question without getting out of bed.

Aesthetics are another common reason people choose lighting control systems. Larger rooms often use more than one lighting source, each of which requires its own control. This is why you'll often see an entire panel of light switches and rotary dimmers located on a wall. Modern lighting control systems replace all of this cumbersome hardware with a sleek, stylish master control that can actually be incorporated into a room's overall decorative scheme. In some cases, people use lighting itself as a design element in different rooms, so the ability to create and control lighting scenes is important. 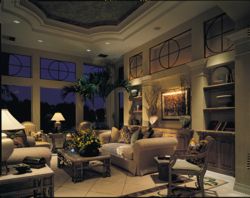 While different people have different reasons for installing lighting controls, one fact is the same for all of them: they're all saving money. As hard as it may be to associate technology and cost effectiveness, lighting controls in any application do in fact reduce energy consumption and extend the life of light bulbs to the point that, over time, they eventually pay for themselves.

The relationship between lighting controls and saving money is rather fundamental, although, admittedly, it's not one that can be considered top-of-mind for most people. As you dim the lights in your home you use less electricity. The less electricity you use, the lower your electric bill. It's that simple. The chart below illustrates how standard light bulbs use electricity. As light levels are lowered (dimmed), less and less energy is consumed. For example, dimming a light level by 10 percent--which is barely perceptible to the human eye--saves 10 percent of energy.

Suppose you have a fixture over your dining room table that uses four sixty-watt light bulbs. Let's say this light is turned on 20 percent of the time, but it is dimmed so that the bulbs are only illuminated (on average) to 80 percent of their potential brightness. 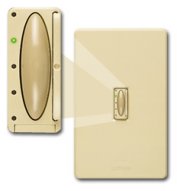 By integrating with other controls such as motorized shades and draperies, time clocks, photocells and motions sensors the energy savings can be maximized.

An astronomic time clock or a photocell can be incorporated into a home lighting control system to automatically operate lights in conjunction with sunrise and sunset so the lights are only used when natural sunlight is not available. This is a common feature for exterior lights so a home can be illuminated at night (for increased security) but not waste energy by having the lights on during daylight. Likewise, motion detectors can be used to ensure that lights for the driveway or garage entry are only used when someone is arriving or leaving the house.

Including motorized shades and drapes into a lighting control system is another way to optimize energy efficiency. When shades or drapes are open more heat (winter) and air conditioning (summer) can escape through windows. This can be reduced by closing shades and drapes when the home is vacant. A lighting control system can provide the intelligence and convenience needed to harvest this savings. For example, a "Goodbye" button at the front door can be programmed to turn off all the lights and close all the shades.

The cost savings associated with lighting controls don't end with just electricity usage. Dimming also dramatically extends the life of your light bulbs. The typical light bulb lasts just 750 hours. Continuing from the earlier example of the dining room light fixture, that means one of the four bulbs will burn out every 39 days. Over the course of a year's time, replacing bulbs in this fixture will cost about $2.70. However, if those lights were dimmed as little as 20 percent (on average), the cost of replacing bulbs would be reduced by four times. If the light fixture in question is also a ceiling fan or uses decorative bulbs, the cost savings can be five to 10 times more. Again, applied to an entire home, these figures become even more significant. The chart below illustrates the relationship between dimming and extending the life of light bulbs.

The features and advantages of modern lighting control systems are truly incredible. Technological advancements have given us comprehensive and affordable home lighting controls that can do things Thomas Edison would have never dreamed were possible. And more and more people are realizing-and taking advantage of-these benefits. It's not often we associate something that consumes power-such as lighting-as a means to saving or conserving, but by their inherent design and very purpose, lighting controls are a way to not only save electricity and related costs, they're a fun, convenient and futuristic way to go about it.