It has been estimated that micro hybrids could cost only $300 to $400 more than conventional vehicles, yet this small additional investment could yield up to a 15% improvement in fuel economy!

It has been estimated that micro hybrids could cost only $300 to $400 more than conventional vehicles, yet this small additional investment could yield up to a 15% improvement in fuel economy!

Hybrid technology is a subject of tremendous interest among earth-friendly citizens, as well as citizens in general. It is our mission at the NAFTC to explain these types of technologies so they can be understood by everyone. We hope that the information in this article, taken from our newest course, will help you better understand the new technology of hybrid vehicles!

Until recently, hybrid technology has been fairly easy to categorize since only two classifications were used: series or parallel. These two classic descriptions of hybrid drives have been used to describe everything from the 1918 Woods gas-electric hybrid to the modern fuel cell-powered hybrid transit bus. 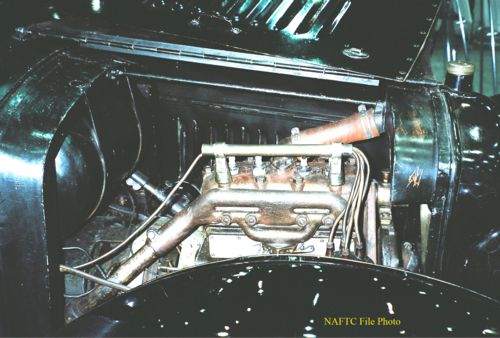 Detail of a 1918 Woods Gas-electric hybrid 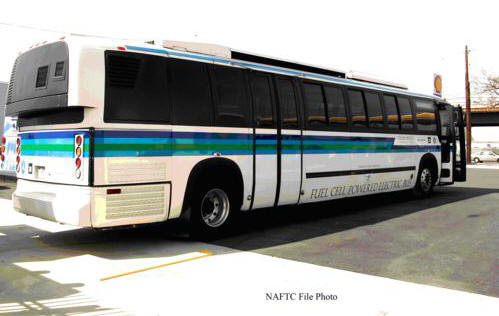 Keeping in mind that a hybrid drive is any drive system that uses a combination of energy devices such as an internal combustion engine, batteries and an electric motor to drive a motor vehicle, let's review the definition of series and parallel drives. 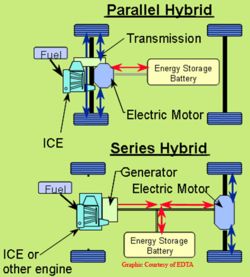 1) Series Hybrid - In a Series Hybrid the primary power source (internal combustion engine or fuel cell) drives a generator. The electric power from the generator is stored in batteries and is used to power an electric traction motor that drives the wheels. Most true Series Hybrids in use today are medium-duty vehicles such as transit buses. During certain operating modes, the Toyota Prius and Ford Escape are Parallel Hybrids, but cannot be defined as either series or parallel!

2) Parallel Hybrid - In a parallel system the primary energy source can drive a generator as in a series system but it can also drive the vehicle alongside (or parallel to) the electric traction motor. The Honda Integrated Motor Assist (IMA) is an excellent example of a parallel hybrid drive system.

Hopefully the attempt to define hybrids as either series or parallel has left you dissatisfied. It is a good thing if you feel this way! The purpose in writing this article is to inform you of a new set of categories which can be used to accurately describe every hybrid on the road today!

A new way of describing hybrids is to categorize them into four groups. These groups are:

Full hybrids are easiest to describe! A full hybrid is a vehicle that utilizes all of the advantages of hybrid technology. A full hybrid is capable of moving under electric power only. It can drive off without the engine running! Since this feature is normally employed when accelerating from a complete stop (engineers refer to this as the launch mode) a full hybrid will feature electric launch. When driving a full hybrid you must remember that during electric launch your vehicle is completely quiet! This means that pedestrians cannot hear you coming! If you are launching from a busy intersection or anywhere that people are nearby, get into the habit of blowing a few toots on the horn to make pedestrians aware of you!

A full hybrid will also feature regenerative braking. Regenerative braking is that feature which allows the electric traction motor to be electronically converted to a generator. This conversion takes place when the vehicle's brakes are applied. Much of the kinetic energy of the vehicle is thus converted back into electricity and stored in the batteries for later use rather than simply wasted as heat. A conventional vehicle's brakes simply convert kinetic energy to heat, and that energy is entirely wasted! Of course, regenerative braking also requires sophisticated electronically controlled braking technology commonly known as brake by wire.

A full hybrid will feature the engine stop or idle stop feature. The hybrid's electronic control system will shut the internal combustion engine down whenever it is not needed to either assist with driving the wheels or producing electricity to recharge the batteries. This feature is most noticeable when coming to a stop. The tach will drop to 0 RPM and the noise and/or vibration from the engine will cease. The engine will restart as soon as it is needed again, usually several seconds after the vehicle has begun to accelerate. This feature alone is estimated to provide hybrids a 10% to 15% gain in fuel economy over conventional vehicles especially in urban driving conditions. Engine stop combined with regenerative braking are the main reasons why most hybrids actually achieve better fuel economy in city/urban driving than during highway driving! Hybrid drivers will notice how rapidly the engine restarts. The conventional 12-volt starter motor that has been used to start automobile engines for nearly a century can only spin the engine up to a speed of approximately 250 RPM. The high-voltage integrated starter/generator (ISG) of a hybrid will spin the engine at speed in excess of 900 RPM. This assures an almost instantaneous restart (less than 300 milliseconds) of the hybrid engine. 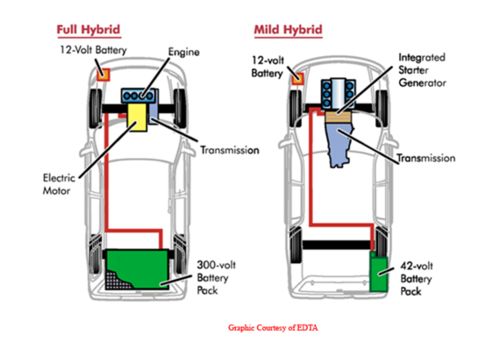 A power hybrid is a full hybrid with one exception. A power hybrid does not include a downsized internal combustion engine. Instead, power hybrids provide a large, high horsepower engine and a hybrid drive system to provide even more torque and acceleration performance than a conventional vehicle with the same size engine. An example of this design is the new Lexus RX400h.

Finally, let's discuss micro hybrids. These are conventional vehicles powered either by gasoline or diesel engines in which the 12-volt starter motor has been eliminated and a specially designed, belt-driven integrated starter/generator (ISG) has been installed in place of the conventional alternator. While the ISG of a micro hybrid cannot help to propel the vehicle, it can provide two important hybrid features. First of all, a micro hybrid will feature idle stop. Engine control circuitry is included in a micro hybrid which will shut down the internal combustion engine when the vehicle is at rest. This feature alone can improve fuel economy by 10% to 15% in city/urban driving environments. The electronic control system in a micro hybrid can also control the charge cycle of the alternator so that it produces electricity to recharge the vehicle battery primarily during deceleration and braking. This provides a mild amount of regenerative braking and an additional gain in efficiency. The Citroen C3, currently being sold in Europe, is a micro hybrid vehicle. 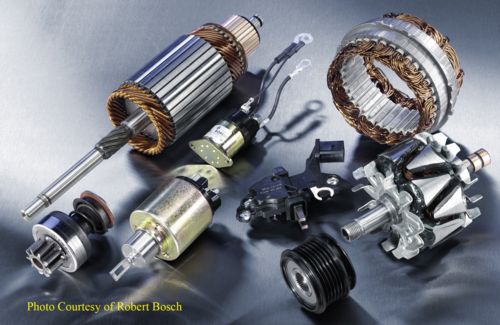 Full, power and mild hybrid designs all carry a significant price premium (three to five thousand dollars) in order to obtain a 20% to 30% improvement in fuel economy. Micro hybrid technology will cost much less when it becomes available. It has been estimated that micro hybrids could cost only $300 to $400 more than conventional vehicles, yet this small additional investment could yield up to a 15% improvement in fuel economy! Micro hybrids, on the basis of cost versus benefit, are poised to become a significant part of the hybrid market!

Learn more about hybrids or choose one of our many other training topics. The NAFTC has training courses covering nearly every facet of emerging vehicle technologies and alternative fuels. The course, Clean Air and Energy Independence: An Overview of Alternative Fuels and Advanced Technology Vehicles will be presented May 23-25 at our National Training Center in Morgantown, WV. Visit us on the web at: www.naftc.wvu.edu to check out our training schedule and list of courses, or call us at 304-293-7882.