Without getting overly technical, the bottom line is that this system, which measures 23 feet in diameter, produces a whopping 6.5 KW of electricity.

Is This Truly, A Revolution In Solar Energy Production?

Without getting overly technical, the bottom line is that this system, which measures 23 feet in diameter, produces a whopping 6.5 KW of electricity.

We've all heard the story of Copernicus, who looked out at the heavens and declared that contrary to what essentially everyone in the word believed, alas, the earth was not the center of the universe, and in reality, the earth revolved around the sun.

But he put off publishing his treatise because powers that be believed otherwise.

Another genius, Edison, had to work hard (it's a bit hard to believe but true) to convince people that electric lighting would be desirable. And it's interesting to imagine the reactions to Michael Faraday, when he said that his &quot;radio" invention would enable people to talk and be heard hundreds of miles away, without any wires.

The true breakthroughs that have changed the world are often not readily accepted, and the inventors themselves have often struggled to get people to believe their claims. It's the Copernican conundrum.

So now please meet John and Inge Laing. The Laings have been inventing all of their lives and their total number of patents just may be reaching the world record held by Thomas Edison, who held 1043 patents. The Laings have lost count, but hold over 1,000.

People from New York to New Delhi benefit from the Laing's creative genius when they turn on a hairdryer and a forceful blast of warm air is propelled by one of their rotary fans. The elegant Laing pumps keep things literally flowing smoothly around the world, reliably and efficiently.

The Laings' approach is fairly consistent: bring the latest technologies and materials together to accomplish multiple tasks in the most efficient, compact and economical ways possible. Some would call it &quot;elegant design." Some would say it comes from that same source that led to the Edisonian, Marconian and Copernican advances . . . powerful genius.

Energy and its sources are fueling much of the emerging new global economy that changes each day with changing oil prices, with nations like China buying up oil futures at record prices. The competition for energy has reached a critical moment, where talk of reaching &quot;peak oil" is making (finally) news in the mainstream media.

This is fueling, around the world, a quest for new energy sources. Germany and Japan are solarizing at a record pace. California passed the million solar roofs initiative. Cleantech, the corporate term for &quot;alternative energy," has gone mainstream.

You see it every day in your communities. Go to your local Home Depot and you can now go in and place an order for a BP Solar power system for your home. In neighborhoods across America, roofs are sporting PV panels. Businesses are using their flat roofs as beds for photovoltaic panels as well. Schools in Michigan are mandating that new schools incorporate solar into all new plans. And in the sun-rich southwest, massive solar arrays are filling the land with panels.

Despite the higher cost of photovoltaic panels ($5 per watt to install, compared to $2-$3 for oil and gas) and the size required to create power (unfortunately their efficiency runs at between 10 and 15 percent), because of its unending availability and therefore its reliability, solar is now being integrated into the future.

Electric modes of transportation are evolving everywhere. For $79 I can buy a little electric scooter at Pep Boys that can actually transport me around my neighborhood. More &quot;adult" versions will be emerging that will likely become fashionably acceptable as people realize just how practical they are for getting places on a daily basis. This transformation to electric powered transporters will become truly revolutionary when they are reenergized from the sun through photovoltaic systems, thus providing truly reliable free energy, endlessly, without reliance on grid-sourced electricity.

As photovoltaic panels continue to appear and become integrated into our daily lives, we will see the emergence of a full spectrum of new &quot;toys" for our homes and communities. Cordless lighting integrating sun, new batteries and the super efficient LED technologies could lead to unwiring areas of homes. Almost any hand tool, being rechargeable, is now &quot;portable." Solarize this and the need for grid power diminishes. Want to have fun, make money and do the right thing? Invent solar &quot;stuff." It will bode well for the planet and for the inventor.

Well that brings us back to the Laings, because they have invented a whole new approach to solar to replace our dependence on oil and meet the emergence of a solar economy. It looks and feels different. It's the new look in solar. And it's called the Pyron Solar Electric Generator.

First, it is literally a unit. Unlike other solar systems that you design and then custom install, the Pyron electric generator is a fully self-contained unit.

It incorporates the world's most powerful photovoltaic cells (developed for space by the Boeing/Spectrolab folks), an ingenious lens that concentrates the sun into a small powerful dot (you know the power a toy hand lens can create on a sunny day), mixes these with their genius for design and voilŕ, it's like the Ferrari of solar. Compact and powerful and elegantly designed. Their first prototype, which is 23 feet in diameter and 16 inches high, produces an astonishing 6.5 KW of electricity. That's enough to power 6 average homes. A comparable photovoltaic panel roof system would take ten times as much space. Nothing compares.

But where this new earth toy suddenly gets real attention is that with all the elegance and genius of the Pyron generator, unlike the Ferrari, which only the rich can afford, it is THE most affordable system in the world. That 6.5 KW Pyron generator will be priced at around $13,000 - $15,000. That's way below the $5 per watt of current PV systems, and it includes a precision ultra-reliable tracking system that takes a total of only1 watt of electricity to operate and increases the daily output significantly compared to stationary systems.

Should people pay attention? They'd be foolish not to. Already the Pyron system is attracting interested visitors from around the world who are excited about what this system could do for energy production, even at a national level. Just like it took Edison a while to get people seeing the &quot;light" of his vision of an electrified nation, so too the Pyron generator could be the &quot;light" of a solarized nation. It makes the mind pause to realize that a 50-mile square of land in the desert southwest utilizing production-level Pyron systems could provide enough power to supply the entire electric needs of the U.S. Think what that could do for the U.S. energy future.

And here is where the &quot;Edison" factor takes over, as many will write it off as fanciful. Well, let history be our guide. Perhaps the Laings have invented a revolutionary means of electric power fueled by the sun. Some will see the light, and hopefully, soon, the Pyron Generation will begin.

One who is familiar with the Pyron system and is sounding the clarion call that a new era has arrived is Dr. Herbert F. Matare. Dr. Matare has recently received the recognition he deserves as being a co-inventor of the transistor, along with Bell Labs. (See The New York Times, February 25, 2003.) He has collaborated with the Laings on the Pyron generator. What does he have to say?

&quot;The potential for this solar energy conversion can be compared to the invention of the transistor which drastically changed the lifestyle of humanity."

Right now, that is precisely what is happening, the lifestyle of humanity IS changing around the world. And the Pyron generator promises to energize the change to a sustainable world.

The Laings have worked on perfecting this for over 23 years. Much has been driven by their very personal quest to meet the pressing needs of the future, which they have been well aware of for a long time. With 5 children of their own who have made them grandparents many times over, they have their newest and most significant invention ready to begin producing electricity to literally make a better world for their grandchildren.

So let's take a look at what this new energy source looks like. In many respects, the technology is fairly straightforward. 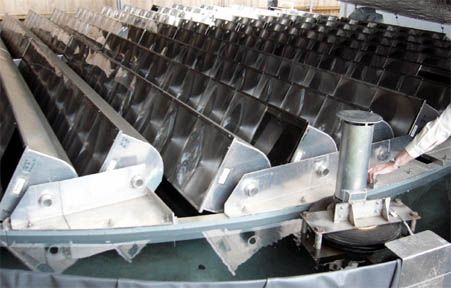 The Pyron generator is a tight array of power modules, each consisting of a concentrating fresnel lens, and the &quot;homogenizer" which takes this very hot and concentrated beam (400 sunpower), creates an even distribution of light rays onto the 3-layer, Boeing-Spectrolab cell to produce 10 times more electricity than any other photovoltaic system. This cell operates at an astonishing 37 percent efficiency and works best when heated (to a point). To moderate the heat, each homogenizer is designed to transfer its heat into the water bath. The modules are arranged in troughs that can float, and float they do in a circular array. The entire assemblage of troughs is supported by a circular rail, which is used for the dual purpose of support and for the tracking that is accomplished with very small electric motors that drive a rubber wheel using only 1 watt to track the sun. The entire system floats on a shallow bath of water, much like a wading pool. People interested in finding out more can visit the Pyron Solar Inc. website at www.pyronsolar.com for a detailed explanation.

Without getting overly technical, the bottom line is that this system, which measures 23 feet in diameter, produces a whopping 6.5 KW of electricity. Larger 30 and 50 KW units are being developed. Its low profile is neighbor friendly. And the cost per watt is projected to be less than $3. That makes this the world champion of power per square meter and power per dollar of investment.

Right now the Laings, who live in the San Diego area, are busy showing the unit to both interested potential users and investors. It is hoped that within one year production will be underway and that within two years, the Pyron Generator will be producing the electricity in both the developed and the developing world.

The Pyron Generator is perfectly suited for commercial use in distributed generation systems, particularly in villages around the world that are not tied to a centralized power system. Pyron generators bring the promise of affordable electricity, at any scale, to almost anyplace on earth without adding greenhouse gasses that accelerate global warming.

In the U.S., the Pyron Generator has unlimited potentials for neighborhood applications, schools, businesses and potentially large-scale power sites to empower America's transference to electric and hydrogen power generation.

With hydrogen cars and electric generation emerging, the Pyron solar generator is particularly suited for use in hydrolyzing water into hydrogen to drive turbines for nighttime generation and supply a competitive source of hydrogen for the fuel cells of the future.

The world now has a new solar generator that has the potential to provide an affordable, sustainable, earth-friendly source of both electricity and hydrogen.

Copernicus, Edison, Faraday, the Laings continue their quest, inspired by your legacies.