The Evolution of PV Technology

There have been three key eras of PV technology development: PV1.0, marked by the birth of the silicon PV cell and exploration around the application of clean energy; PV2.0, which brought about the global mass commercialization of solar and more affordable yet lower quality module technologies; and PV3.0, the era we are just now entering. 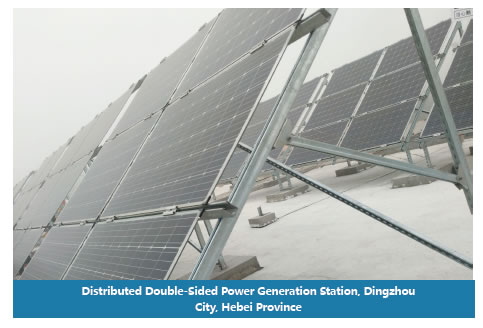 The Panda bifacial modules are 1500Vdc capable and when compared to the traditional 1000Vdc systems the balance of systems (BOS) cost can be reduced from system design adjustments by 3%, which translates to almost 2 mil savings for a 10MW system

Luke Dormehl for DigitalTrends:  As the term “regular windows” suggests, users don’t have to replace the existing windows in their home, but need only treat them with a special process developed by the company. “We apply liquid coatings to glass and plastic surfaces at ambient pressure, and dry these coatings at low temperature to produce transparent films,” Conklin continued. “We repeat these processes, and then collectively these coatings — and thus the glass and plastic surfaces — generate electricity.” Of these coatings, the most important is the so-called “Active Layer,” through which electricity is generated by the absorption of light, and the transparent conductors, which allow the electricity to be extracted. “[The] coatings are primarily organic, primarily from carbon, hydrogen, nitrogen, and oxygen,” Conklin said. “We are constantly refining each of the layers to improve on the power we’re able to extract from these coatings and enhance their manufacturability.”   Cont'd...

Panasonic Continues To Innovate HIT® Technology In Their PV Panels

How Solar is Going Mainstream (Batteries!)

Essentially, we're giving the solar panel a brain; the patented HEMOS chipset can be fitted in a typical junction of any solar panel. With it you can communicate directly with the panel and execute commands at the module level. There are an estimated 43 million street lights in the USA and at least 55 million parking lot and parkway lights. Since they combine to use about 10% of all the electricity consumed in the USA, taking them to LED is a step in the right direction but going all the way to zero energy use is even better.

09/15/14, 08:34 AM | Solar & Wind | Photovoltaic Systems
Energy Efficiency is all about optimal and responsible power use and this is also exactly how one gets the most energy out of their solar generator.

10 Questions to Ask Before Hiring a Solar Installer

09/15/14, 08:34 AM | Solar & Wind, Other Energy Topics | Opinions and Advice, Photovoltaic Systems | EcoFasten SolarÂ®
Going solar should be a great experience - not a headache, and doing your homework upfront will give you something money can't buy - peace of mind.

08/18/14, 08:09 AM | Solar & Wind | Photovoltaic Systems, Tools and Installation Equipment
This product innovation provides benefits of module-level monitoring while avoiding all the complication, costs and disadvantages of existing module-level products. Overall, frameless thin-film modules look to be an important element for solar projects in the United States moving forward. The growth of distributed PV is showing no signs of slowing down, and with it solar monitoring is set to grow as well.

How Upsolar America Sees the Future of the PV Industry The biggest trend we're seeing in the U.S. is the development of new tools to help customers overcome the financial hurdles of going solar.