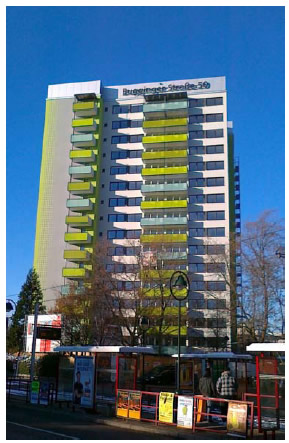 Stretching more than16 storeys skywards, the apartment tower in Weingarten, a city district in Freiburg, is the first residential high-rise worldwide to reach Passive House standards through energy renovation. After undergoing one and a half years of renovation, former and new renters can now move into the newly renovated building at Bugginger Strasse 50. With the support of the Fraunhofer Institute for Solar Energy Systems ISE in Freiburg, the primary energy demand for heating, hot water, ventilation, lighting and electricity was reduced by 40 percent. Even after the official inauguration of the building on 21 April 2011, the researchers at Fraunhofer ISE will continue their scientific analysis. For the next two years, they will acquire and analyse the real energy performance data of the building under operation. The collected results and, in fact, the entire project, serve as a model for future energy renovation projects which are similar in character.
Decisive in converting a populated urban area with different types of architecture into a climate neutral area are energy efficient buildings, the local use of solar energy and an energy efficient supply based on renewable energies. The Weingarten district in Freiburg is representative for buildings constructed in the 1960’s. Therefore, the prerequisites existing at this location are ideal for developing and carrying out such a future-oriented concept. The Freiburger Stadtbau GmbH, badenova WÄRMEPLUS and the Fraunhofer Institute for Solar Energy Systems ISE have made it their common goal  to reduce by 50 percent the primary energy demand of this Freiburg city district by the year 2020.
With the inauguration of this landmark project, community housing associations, energy suppliers and scientists jointly celebrate an important milestone. For the first time ever, the heating demand of an apartment high-rise after renovation is reduced markedly to below 20 kilowatt hours per square meter per year (kWh/m²) – comparable to a newly built passive house. The building heating demand after renovation amounts to about one fifth of its previous value, i.e. has been reduced by 80 percent.
During the planning and construction phases, the experts at Fraunhofer ISE contributed different concepts and technologies. The basic concept of the renovation consists of incorporating the balcony area into the living space. This produces a more compact architecture and lower heating losses with respect to the useful area. The resulting increase in the room depth, however, prompted investigations on different daylighting strategies. With the aim of high indoor comfort coupled with low energy demand, guidelines were drawn up for the planners. In addition to calculations on the building energy demand and sun protection strategies, the researchers provided guidelines for the optimal zoning of the floor plan and the façade design. The large windows, without window lintel, allow the daylight to extend deep into the building interior. The exterior sun protection ensures that the inner rooms are shielded from the summer sun and that the interior space remains at a comfortable temperature. To reduce the energy demand, the façade, roof and ceilings were insulated and triple-pane glazing was implemented for the windows. Avoiding thermal bridges was given particular attention. By using so-called aerogel insulation, the researchers at Fraunhofer ISE could minimize the effect of thermal bridges at particularly critical spots. A ventilation system with heat recovery provides a continual supply of fresh air to the apartment. To supply electricity, a photovoltaic system with just short of 24 kWp is installed on the roof of the building.
Since March 2001, Fraunhofer ISE has been measuring the building energy consumption. The energy performance of selected storeys is being monitored in more detail e.g. hot water demand, electricity, heating, window contact. The measurement period will last two years and the results will be compiled anonymously.
Reducing the electricity consumption in the household is a decisive factor in reducing the overall primary energy consumption. The residents of the storeys selected to undergo detailed measurements are to be continually informed about the course of their energy consumption. The heat supply for the city district of Weingarten is based on a combined heat and power supply (CHP), a very good and efficient energy supply. In the future, this supply can be improved by increasing the fraction of CHP. Due to the applied building insulation, the energy demand is decreased and becomes more evenly distributed over the year. The use of the gas operated boiler can be reduced. “In the total perspective, the project goal is to demonstrate how to create a more efficient and enduring climate-neutral energy supply for existing and future city districts. By renovating the city district of Weingarten in a step-wise fashion, the conditions are set for a decentralized energy management. Thus, we can react to the increasing amount of fluctuating power feed-in from renewable energy sources,” says Florian Kagerer, project leader at Fraunhofer ISE.
About the renovation project “Weingarten 2020“

The western part of Weingarten, a city district in Freiburg constructed between 1965-1969, is to be modernized in three stages in the period from 2007 to ca. 2020.
The site area covers about 30 hectares and has approximately 5800 residents. In the area planned for renovation, there are four different building types, including about 1300 apartments: 16-storey high-rise residential buildings, 8- and 4-storey multiple-family houses as well as several non-residential buildings. The newly inaugurated 16- storey high-rise at the Bugginger Strasse 50 is the first of four high-rises to be renovated. The renovation work lasted one and a half years. By optimizing the building envelope and the insulation, Passive House standard was achieved. The German Federal Ministry for Finance and Technology BMWi sponsored the renovation project within the framework of “Energy-Efficient City”.