Gulf Stream Turbines LLC (GST LLC) owns a patented submersible hydrokinetic energy technology to be placed in the Gulf Stream Ocean Current 15 to 20 miles off the SE coast of Florida between Key Largo and North Palm Beach, with no harm to marine life.

The Gulf Stream Turbines' 85% capacity factors are equal to natural gas and coal fossil fuel plants, but with no CO2 emissions. Each 1.2 MW turbine would offset about 10,000 tons of carbon dioxide emissions when compared to fossil fuel plants. The turbines costs are comparable to wind turbines but their capacity factors and efficiencies are at least 2-5 times more efficient. GST LLC aims at harnessing the powerful and constantly moving ocean currents to produce free and renewable electricity. The patented hydrokinetic energy production can be used to subsidize water desalination and produce valuable hydrogen during off-peak hours for the transportation industry. 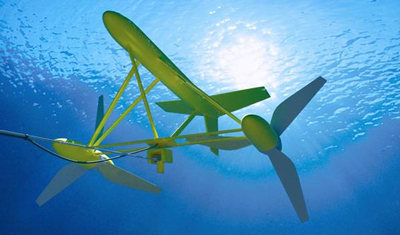 Florida has the third worst freshwater availability in the United States and has had to impose restrictions on water usage to deal with the historic droughts that have gripped the region. Consequently, Florida has looked into sea water desalination to help solve the states water needs. Desalination plants are an excellent source of water because their production is not effected by weather patterns, but they require enormous amounts of energy to push the water through reverse osmosis which can drive up costs. The proposed location of the turbines is within direct proximity to the newly proposed seawater desalination plants located on the Atlantic Coast. The energy derived from the Gulf Stream Turbines will be continuously renewable and free, greatly reducing the potential costs of water desalination and improving the water quality of South Florida. 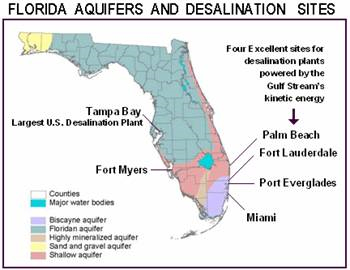 Honda, Toyota, GM, Daimler and Hyundai all prefer fuel cells over battery technology, but the availability of hydrogen has been the main constraining factor in fuel cell growth. GST LLC has a promising solution to the chronic problems facing the mass production of hydrogen as a fuel source for transportation. Electrolysis is a carbon neutral method of mass producing hydrogen, but requires enormous amounts of energy. By utilizing GST LLC’s renewable and free energy, hydrogen costs will be comparable to gasoline and spark growth in fuel cell technologies.

With their patented technologies using submersible turbines and utilizing the Gulf Stream Ocean currents, GST LLC can help solve our nation’s economic competitiveness and environmental challenges and add to our security that we all face in today’s world and the uncertain future of tomorrow.

Gulf Stream Turbines LLC is currently in the research and development phase and is looking for visionary partners interested in helping bring its patented technologies to the market. For more information visit www.gulfstreamturbines.com or contact Rowen Negrin at rowen@gulfstreamturbines.com