Based on a book by Mark Lynas, Six Degrees Could Change the World focuses on basically what our world would be like if the temperature increased incrementally by one degree. This is accomplished with the use of spectacular weather stock footage combined with sate of the art CGI effects to show the viewer just what kind of weather conditions humankind would be faced with after runaway global warming. 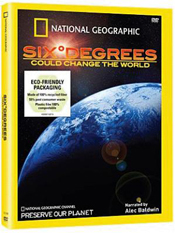 The film begins with what world weather would be like if the Earth's overall temperature rose by one degree. The film paints both a frightening yet compelling vision of a world dying under the heat of its own excesses. Hauntingly narrated by Alec Baldwin, the film takes us through all of the changes the Earth would experience at each of these benchmark increases: changes in everyday temperature, changes in oceans and ocean currents, changes in natural disasters. As the temperature goes up, so does the volatility to earth's delicate weather balance.

Six Degrees Could Change the World was produced by the National Geographic channel and was direct by Ron Bowman. Bowman and his expert team of filmmakers have fashioned a terrifying prophecy of our tomorrows if the specter of global warming is not reversed. One of the most engrossing parts of the documentary is part of the film where Bowman describes some changes to the global environment that have already begun to take place. The film not only challenges the viewer with the responsibility of stopping future global warming, but also blames us for the damages that may have already occurred. Damages to the Earth's fragile ecosystem that may be irreversible.

One scene seems harmless enough…a vineyard growing wine quality grapes in England. Such a concept seems almost banal, but the frightening punchline to this story is that only a few years ago it was simply impossible to grow wine quality grapes in an English weather environment. In fact. ,many wine connoisseurs frequently joked about a “good English wine” because they knew ( or so they thought they did) there would never be one.

As beneficial as this climate change is for England's wine industry, such a change is doomsday for followers of global climate alterations. Wine grapes growing in England means that England's average everyday temperature has risen possibly by at least one degree or quite possibly more.

A terrible scenario which played itself out in Paris, France just a few years ago is another example of the deadly side effects of temperature increase. Up until recently, Paris, France was known for relatively mild summers. Most of the homes and apartment houses in Paris are famous for their metal roofs which were designed to keep the interiors cool in the summer without the need for air conditioners. However, those same metal roofs turned the inside of Parisian homes and apartment rooms into furnaces in the summer of 2003 when an unparalleled heat wave baked Europe and the Mediterranean. The heat wave claimed thousands of lives across Europe.

The documentary features several of these “real life” examples of early global warming and Bowman's direction is strongest in these scenes. Baldwin's narration coupled with these examples of global warming as well as the doomsday scenarios of what would happen with temperature increases make Six Degrees Could Change the World one of the best of last year's environmental documentaries.