05/13/10, 03:02 AM | Solar & Wind | Interviews, Wind Energy
1. Who are the primary customers for your small wind turbines?
When we first started UGE our goal was to create a wind turbine that would work well in urban areas such as the empty roof-tops in New York City.  We succeeded in our goal, creating patented technology that is nearly silent and vibration free while at the same time being the only wind turbine in the US with a certified power curve.  We also wanted it to look great so that customers and their neighbors wouldn't mind looking at it.
Not surprisingly, the result was that all consumers want these features, no matter where they are!  So today we sell to residential, commercial, and governmental customers from all walks of life, as well as distinct applications such as telecoms and lighting. 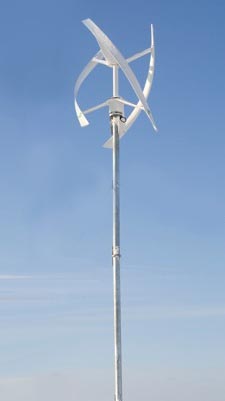 The next product that we will be launching in June is another line of wind-powered lamps.  I am really excited about the design of this product which will be used for smaller scale applications such as path lighting.
We have several other products in development as well so readers can watch our website for more exciting product launches later this year.