05/13/10, 03:05 AM | Solar & Wind | Vehicles
Progressive is providing the $10 million prize purse for the Progressive Insurance Automotive X PRIZE, which was developed by The X PRIZE Foundation, founded by Peter Diamandis. Peter Diamandis has a broad worldview and what is called in the Orient, high eyes. He is committed to making a difference in the world in the realms of technological advancements that will benefit humanity.

And toward that end he has enrolled others to support the efforts and he has set up competitions called X-Prizes that challenge creative and resourceful people to come up with solutions to interesting problems that confront us.

Sustainability, Fuel efficiency, 0 Carbon Footprint, Ecologically Responsibility are common buzzwords these days but they will have a huge impact on our future.

Some of these challenges, like the recent X-Prize competition to engage private efforts towards entering outer space capture everyone’s imagination. Others may not be quite so “sexy” but they can set in motion concerted intellectual efforts to solve major problems and advance technologies past limits that previously were “known” to be insurmountable.

The goal is to beat 100 MPGe and provide beautiful, affordable transportation. That means the equivalent of 100 miles per gallon (gasoline) equivalent. This is done to level the playing field regardless of the fuel being used by the vehicle. Hence the vehicle can be powered by battery stored electricity and the energy usage can be measure equivalently with traditional gasoline.

And although in the second stage of a four stage competition the initial 111 teams have already been winnowed down to 28 teams we can see that progress is being made. Some interesting competitors are still in the chase.

The competition has been set up with the venue in Michigan since the State still remains the major center of automotive development worldwide. We have just witnessed the completion of Stage Two, which is about basic issues of drivability, maneuverability, safety, durability, and emissions.

The PRIZE has three competition stages - Shakedown (which is this stage), Knockout and Finals - followed by a Validation stage for the competition finalist, from which three winners will be announced. You can view the competition timeline online at http://www.progressiveautoxprize.org/prize-details/competition-timeline.

There are two main categories in this competition. One is for vehicles that are enclosed and 4 wheeled much like the ubiquitous automobile. The other is for innovative vehicles that may have more or less than 4 wheels and developed in non-standard configurations.

The testing is being done concurrently which makes for interesting sights at the Michigan International Speedway located in Farm Country west of Ann Arbor.

The effort and the vehicles are housed in 3 Paddock buildings in the infield. One is devoted to the Organization, meetings, presentations, and luncheons. Another is devoted to instrumentation testing, and the third is devoted to the vehicles being tested each day. Here you can see the garage filled with engineers highly focused upon their laptops and checking data and people climbing in and out of the vehicles making adjustments and preparations. There is an air of anticipation and excitement.

The physical tests are being run on the main speedway loop and on a road course located in the rolling woodland just to the east of the main course. 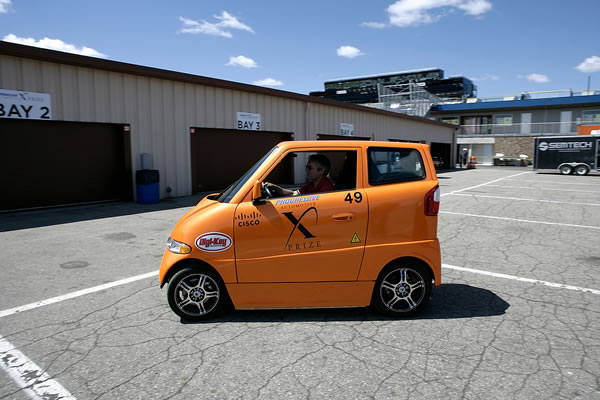 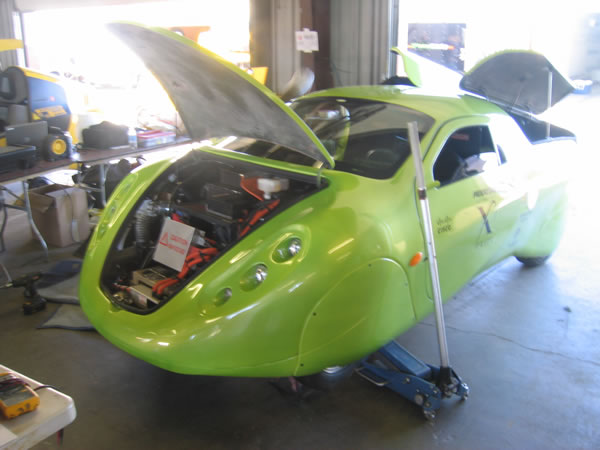 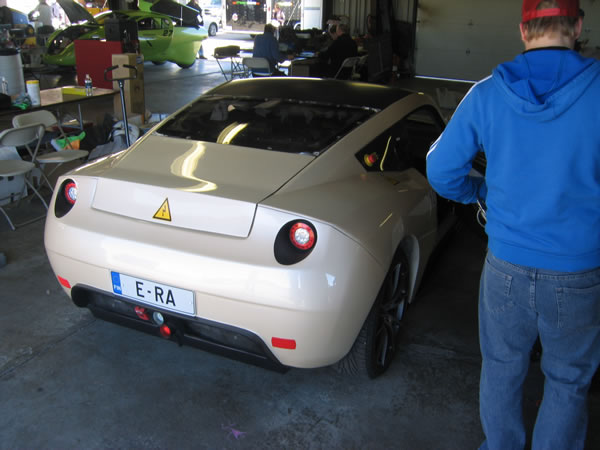 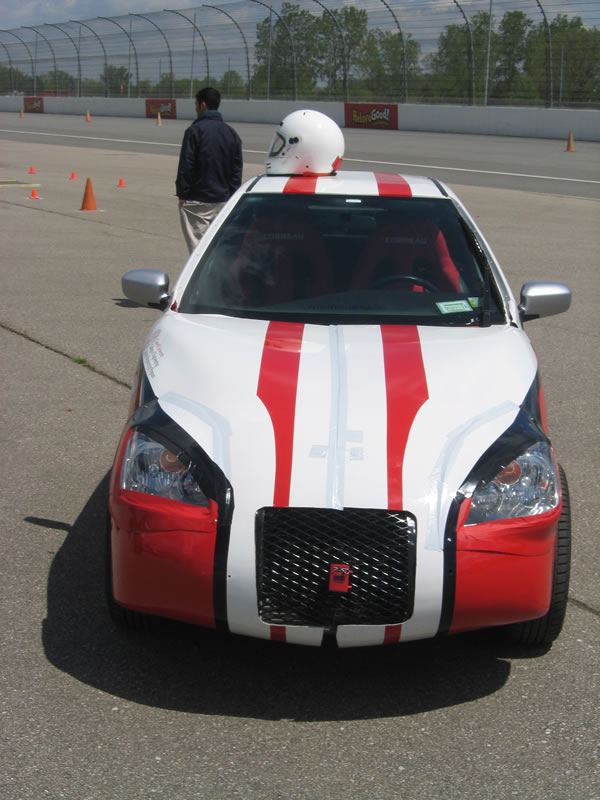 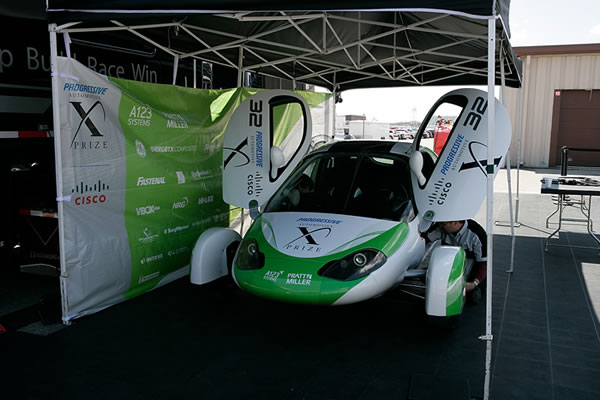 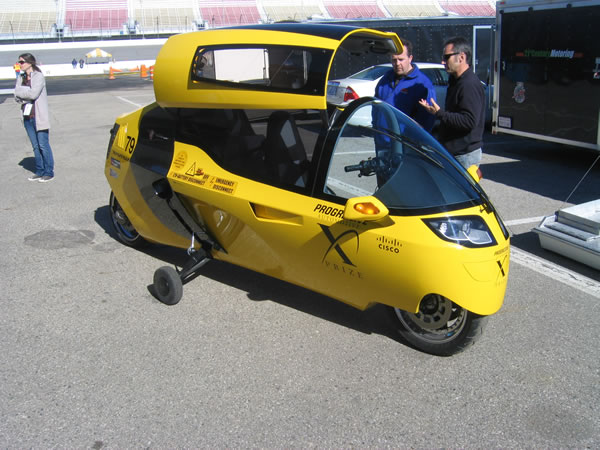 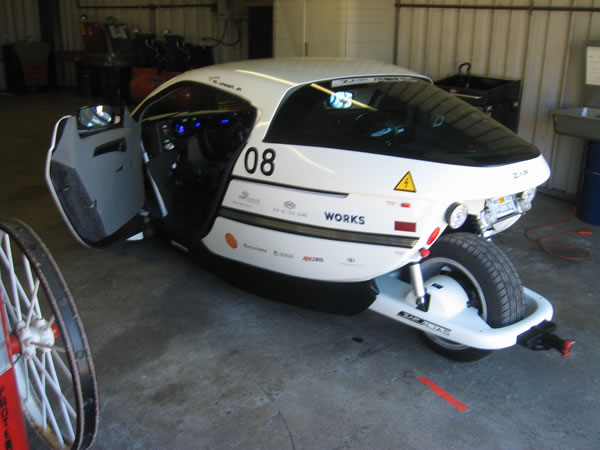 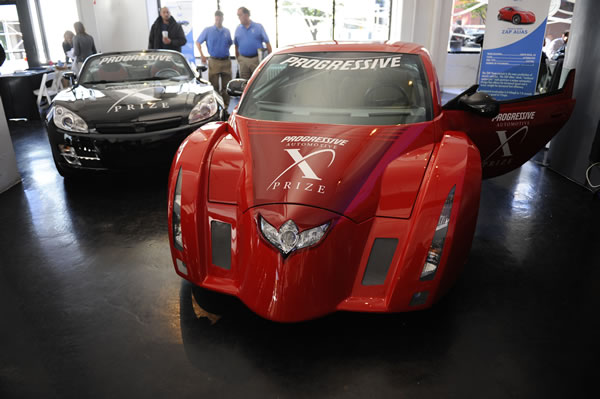 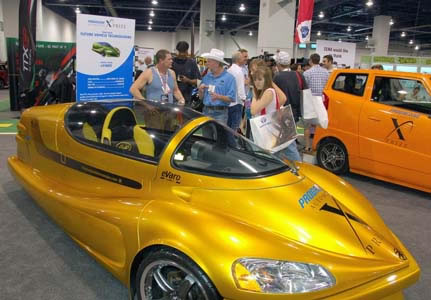 NOTE: Teams marked with a single asterisk (*) received a “conditional” pass during the Shakedown Stage. This means the team’s vehicle passed technical inspection but did not successfully complete at least one on-track safety test or did not complete all mandatory events. These vehicles will only be allowed to enter the Knockout Stage if they successfully pass Technical Inspection and complete durability requirements.

Teams marked with a double asterisk (**) received a “probationary” pass, which indicates their vehicle did not successfully complete at least one component of technical inspection and thus were not allowed to continue to on-track safety tests during the Shakedown Stage and hence faced elimination. These teams demonstrated running vehicles that met the established guidelines of the competition. The vehicles will be re-inspected and must complete the mandatory portion of the on-track safety events before being allowed to continue in the competition.

Two teams – TW4XP (Germany) and K-Way MOTUS (Italy) – will complete the Shakedown Stage June 16-18, as both teams were unable to participate in the regularly scheduled events due to travel restrictions in Europe resulting from the Iceland volcano eruption. Both teams will be required to pass the technical inspection and mandatory driving events before moving on to the Knockout Stage.

Here are pictures of contestants taken by the X-Car Competition, At the Spring Detroit Auto Show, or by myself…

As an aside you should know that Bob Hetherington, the Editor and Publisher of AltEnergy.mag, while a student at UBC in Vancouver won first prize in a similar competition that also completed here at Michigan International Speedway way back in 1972.

The testing for this phase is done and it will be on to the two remaining stages shortly.