It gets pretty cold in Hanover, NH, home of Dartmouth College.  The average January low is about 9 degrees F.  So it’s a challenge – and it’s expensive - to keep the campus properly heated (and cooled in the summer) as efficiently as possible.  The college has a centralized plant for its steam-based system and it’s been burning about five million gallons of Number 6 fuel oil a year to heat (and cool) the 125 buildings.

The college expects to reduce fuel requirements by five to 15 percent a year and it expects to recoup its expenditures on the new system in a year at the five percent reduction rate, according to Stephen R. Shadford, Dartmouth’s energy engineer.

“Now, we can analyze equipment use, factor in weather forecasts, and adjust systems appropriately, while also locating problems like faulty meters and leaking pipes,” Mr. Shadford said.  “We can fix, optimize and really use the system.”

“This is a very wide area network,” he added.  The main campus is spread out over about 250 acres.

Dartmouth is automating metering systems  comprising dozens of free-standing, almost entirely un-networked meters located in each building throughout its campus.   The college uses a central steam plant for heating campus buildings.  Meters in each building measure the amount of steam condensate and electricity consumption.  In Dartmouth’s system, each pound of steam condensate represents approximately1,000 BTUs released at the end point.

A few of the newer buildings have IP-addressable electrical meters connected to the campus communications network.  But that’s, perhaps, 10 percent of the buildings; Dartmouth has buildings that date back as far as 1820.  It’s all part of the college’s commitment to reduce greenhouse gas emissions dramatically over the next 20 years (http://www.dartmouth.edu/~news/releases/2008/09/29.html).

Historically, Dartmouth dispatches four staff from its central heating plant to record each meter manually once a month in a log book, where the data is then  entered manually in  a computerized utility billing program.  Because the data have been collected and entered over the course of the entire month, it has been impossible for engineers to develop a load profile (a snapshot of current usage) or to adjust the system operation in response to current data.  For the college it was, Mr. Shadford said, “like getting your bill from the fuel company once a month.”  In addition, if a meter failed, it might be weeks before the failure was even discovered, losing valuable data in the meantime.

“We’ve gone from one data point a month [per meter] to 3,000 a month,” Mr. Shadford said.  “We get a reading every 15 minutes now, on the amount of condensate, the electricity use, and the amount of chilled water [during cooling operations].”

The Dartmouth project is unusual among colleges, he said, because most institutions either have gone to the expense and upset of installing a wired network to monitor energy use, or have simply made do with a manual recording system like Dartmouth’s.

Dartmouth began to plan for the networked monitoring system in early 2008 and it quickly became clear that wireless was the way to go.  After surveying the available wireless networking solutions, Dartmouth selected the Spinwave product line to gather and transmit the data.

“Spinwave has the full range of products we need and they are purpose-built for this application.  This is a very wide area network,” Mr. Shadford said.  “It’s not a generic mesh network.  In the future we can add in temperature/humidity transmitters if we want.

“It’s elegantly simple to install,” he said.  “You just connect two wires and [the pulse counter] starts sending to the gateway.”

The college began with a pilot installation in March 2009 in one of the 21 zones of the campus, helped in part by a grant from the State of New Hampshire Greenhouse Gas Emissions Reduction Fund (http://www.dartmouth.edu/~news/releases/2009/11/23.html).  Full implementation began in January 2010 and will be completed by late Fall.  Ultimately the Dartmouth system will use more than 200 Spinwave devices: 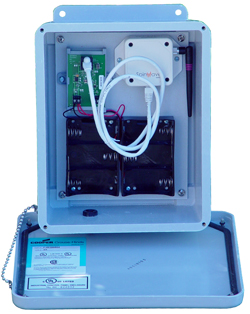 A Spinwave pulse counter installed in a meter at Dartmouth

All of these products are wirelessly linked by Spinwave’s mesh network, which is based on IEEE 802.15.4, a very low-power-consumption data communication protocol.  Spinwave products have a transmission range of up to 3,500 feet and each one can act as a router, making them ideal for the sort of network Dartmouth needed.

Many 802.15.4-based products are designed to operate in the 2.4 GHz RF band, which is used by many other wireless devices, such as WiFi, cordless telephones, microwaves and Bluetooth communications.  This can cause serious interference problems for other systems using 802.15.4.  Spinwave’s patent-pending implementation of the protocol, however adds a crucial self-adapting frequency agility that shifts the signal from channel to channel within the band to avoid the interference.  This gives the Spinwave system a reliability that other implementations of 802.15.4 cannot deliver.

Since the entire system operates wirelessly, the implementation has gone on with no disruption in operations.  The installation, he added, “is going exceptionally well.  The performance is totally what we expected, and, of course, we have about a year’s worth of experience with the initial pilot zone.  It’s worked just fine.”

The data goes into an energy management program from Rockwell Automation called RSEnergyMetrix, which analyzes the data.  With the mass of data streaming in via the Spinwave network and a weather-forecast feed from the National Weather Service, the college not only can create current load profiles, but also can develop a 24-hour forward load projection for each building.

Once the network is fully installed, the college has some big plans for using its new data.

“This is going to allow us to identify things that are clearly wrong,” said Mr. Shadford.  “And it’s going to let us gain some savings by implementing strategies we know we want to employ: some optimization strategies.

“But we also expect to get some savings by putting our information out there in front of the college community,” he said.  “We plan to set up kiosks around campus to let students, professors and administrators see what’s going on with our energy usage and to encourage them to do the simple things, like closing windows and turning down thermostats, that can help reduce fuel usage further.”

The new system has already delivered one side benefit:  “We’ve been able to see some odd things in the real world,” Mr. Shadford explained. “We were able to determine that one building in our medical school appeared to be the worst energy building on campus.  We knew it wasn’t, so we started looking for leaks in the piping and found, ultimately, three places where city water was leaking into the condensate.  When the third leak was sealed, we saw the change that afternoon.

“We couldn’t have done that without this network.”