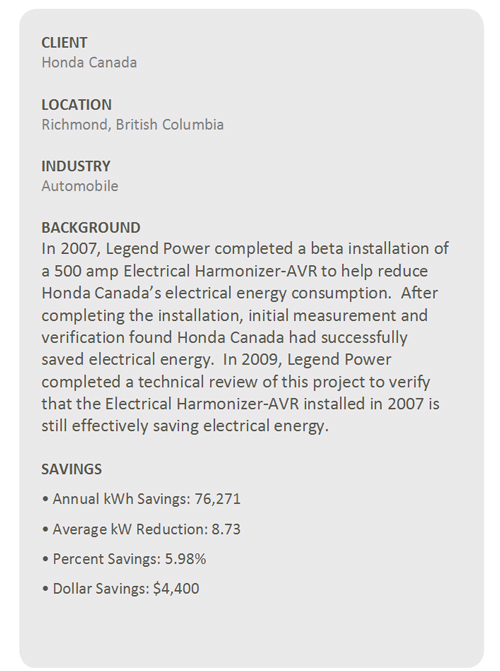 METHODOLOGY: MEASURMENT & VERIFICATION
The instantaneous effect of changing the voltage applied to a facility can be easily measured by making measurements for a few seconds before and after the voltage change. For many loads the change in power will happen immediately but in others the load will need time to settle into its new steady state condition. Two sequential measurements within 0.5% of each other are adequate to ensure that transients have passed.

If individual loads or circuits cannot be isolated, there is the likelihood that random changes in the total load will make it difficult to isolate the effect of voltage changes. To avoid this, several steps of voltage up and down were analysed to obtain at least two samples where the steps in power are consistent. This allows the relationship between the voltage and power to be obtained at that particular time.

The control software was set up so that on power up a series of voltage steps was executed every 30 minutes over a period of four days. These steps were from the actual tap setting to bypass and back. That is to say that the output voltage was never taken too low. If the control was already selected bypass nothing would change.

Each of the series of steps were analysed to determine the change in real power produced by the AVR at that time and day. This resulted in 48 samples per day for four days. For the purposes of verification the actual average power over 30 minutes centred on each sample will be divided by the percentage AVR change determined for that sample to determine the average real and reactive power which would have been drawn without the AVR.

Finally the kWh for the complete week was determined by summing the 30 minute samples above, which will yield the actual kWh used and the kWh which would have been used without the AVR. Comparing the two totals allows the weekly percentage effect of the AVR to be calculated.  For the purpose of calculating the percent savings, the original energy data from 2007 will be used as a benchmark. 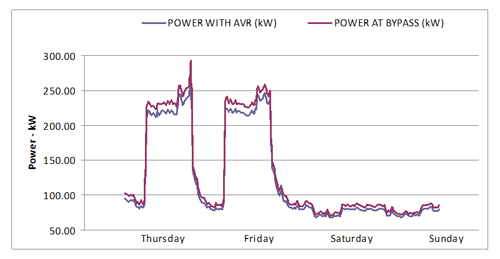 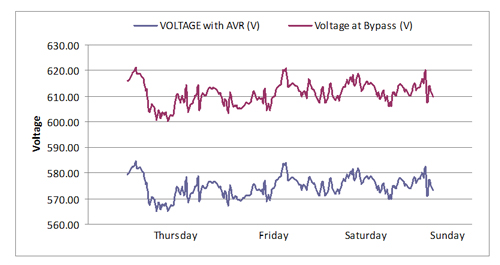 THE RESULTS
Nearing three years after installing an Electrical Harmonizer-AVR, Honda Canada continues to save energy through Legend Power’s technology. The load profile in this facility is largely lighting and motor loads with some small electronic loads. Most electronic loads use front end regulated power supplies and do not save energy through voltage optimization, because of this only lighting and motor & HVAC loads will be considered in this case study. The following provides an explanation on how the savings respective to both motor loads and lighting loads was achieved.

RESISTIVE LOADS & LIGHTING LOADS
These include most heaters and traditional incandescent lighting loads. The instantaneous electrical power consumption is proportional to the square of the instantaneous voltage and the temperature of the resistor typically changes much slower than variations in the voltage. This means that the average power can easily controlled via the voltage, irrespective of the waveform.

It should be noted that some loads are temperature dependent. An incandescent lamp typically draws several times its normal current for the brief interval until the filament warms up. The useful light output and lamp life are also not straightforward functions of voltage. At low voltages a lamp will last a long time but not be very bright. At high voltages a lamp will be better at converting electricity into visible light but burn out quickly.

Many heating loads are thermostatically controlled. This means that although controlling the voltage will control the instantaneous power the average power and energy consumed will be unchanged since the heater at lower voltage will simply rum for longer at a lower heat output.

The initial facility audit performed in 2007 prior to installing an Electrical Harmonizer-AVR included an isolated voltage reduction of 6% on the buildings lighting loads which revealed a 6.85% instantaneous power savings.  Although a voltage optimization simulation was not performed as part of this case study, Legend Power does not see a reason why voltage optimization would not reduce power by 6.85% on the buildings lighting loads.

MOTOR LOADS
Traditional induction motor loads directly connected to the AC line draw real power which goes into supplying the mechanical output and also the iron and copper losses in the motor. There is also a reactive power drawn to maintain the magnetic flux in the machine, which reduces the power factor. The magnetic characteristics of the motor also mean that harmonic currents are drawn from the supply.

The effect of voltage regulation on this complex load is not straightforward. In general the rated conditions given on the nameplate do not represent the most efficient point for motor operation and many mechanical loads are variable and/or partial. The higher the voltage the higher the reactive power demand and the higher the harmonic current flow. The losses in the iron will also increase. The conversion of electrical power into mechanical power is generally lower at lower voltages but only increases negligibly if the voltage is above the rated value and is offset by other losses. In summary, the overall motor efficiency and power factor are usually increased by reducing the motor voltage to its rated value or below.

Based on the assumption that the buildings lighting load was reduced by 6.85%, Legend Power assumes that the remainder of the savings is a result of motor load efficiencies.  The Electrical Harmonizer-AVR helped to reduce power to the facility’s motor loads and HVAC system by 7.25%.

TOTAL SAVINGS
As a result of installing an Electrical Harmonizer-AVR, Honda Canada has achieved the following results:

The savings achieved through voltage optimization is expected to persist over the life of the Electrical Harmonizer-AVR.  After 10 years, Honda Canada will have saved an estimated 762,710 kWh of electrical energy and $44,000.