06/22/10, 10:18 AM | Solar & Wind | Miscellaneous Energy Topics
Introduction
During a vacation trip to the Disney World, I saw the Exxon-Mobile energy presentation. The presentation includes a portion in the form of the Jeopardy game. For the final question in the Jeopardy game, the answer is “The solution to the future energy need.” The correct question is “What is brain power?”
Human have been endowed with the ability to resolve many problems. In this wonderful world plenty of supply is available for human to enjoy life if adequate management effort is made. The world’s energy supply cannot run out.
This writing is going to identify a procedure to secure low cost energy for human consumption for as long as the sun shines. The brain power of the human is the critical factor to implement the solution. This analysis also indicated that OTEC power as part of the solar power is sufficient.
Hydrocarbon from fossil fuel is at this time the dominant form of primary energy source. The total carbon used in fossil fuel in the world is about 9 billion tons a year, generating about 29 billion tons of carbon dioxide, a well known green house gas every year. For the world population of 6.5 billion people, the average carbon use is about 1.4 ton per person.
Technical Summary
For those people that do not want to get into the details, the basic assumptions are summarized here.
1. Energy from the sun in being stored in the ocean at a rate more than two thousand times the world wide energy need for all human activities.
2. Energy stored in the ocean has been identified (in 1881) as a potential source for human energy need. Tropical areas provide the best locations. Some technology to use this energy source has been developed.
3. Effective method to use the ocean thermal energy has been identified by LAUSDEO Inc. This completely renewable method can provide electricity at 2 cent per kilowatt hour.
4. The cost for conducting initial experimental indoor technology demonstration is less than 50 thousand USD. Ocean model demonstration for OTEC should cost less than 1 million USD. Continuing expansion can be funded from profit of the operation. There is absolutely no need for subsidy of any kind after technology demonstration. 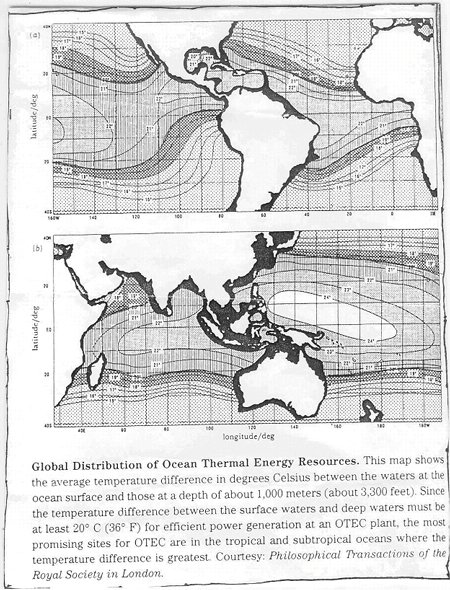 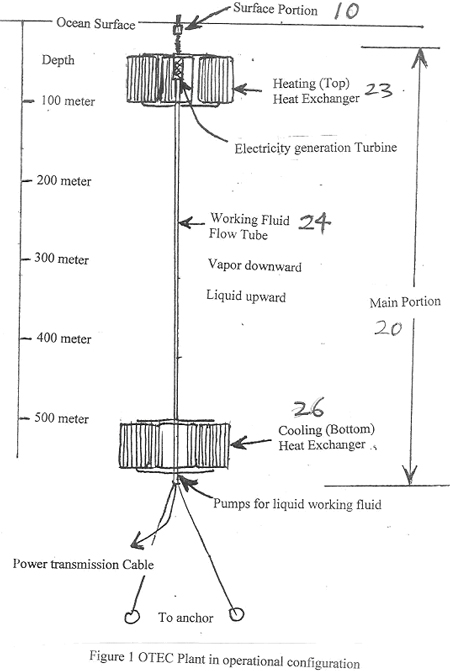