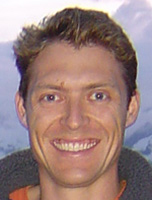 JoeBen is Chair of the Airborne Wind Energy Consortium

JoeBen Bevirt is an inveterate entrepreneur born with a passion for engineering that has driven the formation of two successful companies over the past 10 years prior to Joby Energy and Joby Aviation.

In 2000, JoeBen co-founded Velocity11 which developed high-performance laboratory equipment. He served as President & CEO until 2002, as President until 2006, and as a board member until the sale to Agilent Technologies in 2007. Under his leadership, Velocity11 employed 200 people and grew by 50% annually.

In early 2008, JoeBen turned his focus to renewable energy and founded Joby Energy to develop groundbreaking airborne wind turbines to harness the immense and consistent power of high-altitude wind to provide reliable and low-cost renewable energy.

Joby Energy is a founding member of the Airborne Wind Energy Consortium along with Makani Power, Magenn, and SkyWindpower.