Contributed by | Boots On The Roof

The boys and girls at University of New South Wales recently “smashed” the world solar car speed record, reaching speed of more than 54 mph on January 7, 2011. 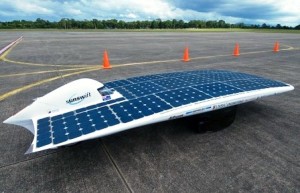 The Sunswift IV was speed tested at the HMAS Albatross navy airstrip in Nowra, Australia, and officially entered the Guinness World Record book for the fastest speed attained by a Solar-Powered Land Vehicle, beating the old record of about 49 mph.

Green resources report that the milestone is for cars powered exclusively by silicon solar cells.

“We broke the record at 10.32 AM (on January 7),” said Sunswift project manager Daniel Friedman. “The Guinness World Book of Records adjudicators were on hand, so it’s all official. We’ve even been handed our certificate.”

“We were confident … we only needed a little bit of sunshine and that was enough,” Mawer said.

Mawer was definitely “solar-charged” about the opportunity to set a new land speed record with Sunswift.

“I’ve been lucky enough to drive racing cars all around the world but this was right up there as a buzz. To grab the world record is just great for the whole team, and the University of New South Wales put in a big effort to get this done and hopefully we can keep chipping away at it to raise the bar.”

According to the company’s stats, the Sunswift IV produces about 1200 watts – the same power it takes to run a toaster.

“We hope the news will spur a lot more interest in solar energy and the debate about renewable energy technology,” said Friedman.