Sade's idea was to eliminate the need for masts or poles to secure a solar array to concrete foundations. Instead, the tracker would use a ballast pan filled with dirt, gravel or sand. 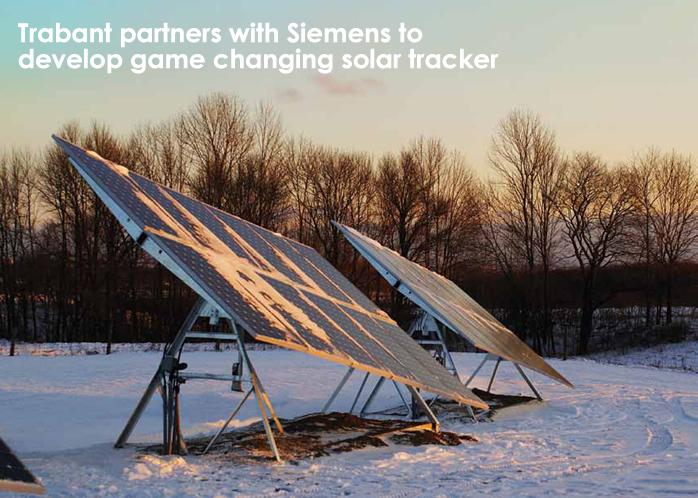 In early 2010, Ron Sade decided it was time to bring his idea for a new solar tracker to market. After more than 11 years in the solar industry as a project developer, both in the U.S. and abroad, he says the time was right to “stop digging for gold and start selling shovels.”

He understood that new solar array farms were limited by the ground quality of potential sites. Wetlands, sand, rock and other unstable or unusable conditions greatly limited the number of potential sites. Additionally, solar trackers were often undependable with problems originating in the control boxes. If an array or farm went down, it could take days or weeks to replace and reprogram control devices. 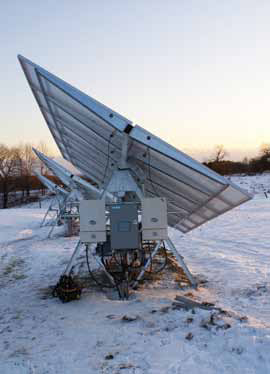 Sade’s idea was to eliminate the need for masts or poles to secure a solar array to concrete foundations. Instead, the tracker would use a ballast pan filled with dirt, gravel or sand. The filled pan, holding 9,000 lbs., would float on the surface of the ground, securely anchoring the array….even in winds higher than 90 MPH. He also wanted to improve the reliability and performance of previous tracker control boxes. He needed a technology partner with off-the-shelf products and service available worldwide. The partner had to have extensive experience with solar farm customers and the sophistication to reliably control thousands – or just several – arrays at a single farm.

Today, Sade’s go-to-market strategy is alive and well and has come to fruition in Trabant’s tilted (TT) and horizontal (HT) Ballasted Solar Trackers. The President of Trabant Solar Inc., Richmond, Va., says his Solar Trackers are controlling 12 Monocrystalline solar panels producing 10 kWp of electricity at a private installation outside of Toronto, Canada. Many more installations are underway or planned – including a 33 MW, 5,600-unit project in Leon, Mexico. “More than ever, we must reinvent ourselves and move ahead with renewable energy,” Sade said. “A big part of that is in the photovoltaic (PV) market. The U.S. is in the early stage of PV development and there is still time to enter with good products on an international scale.” 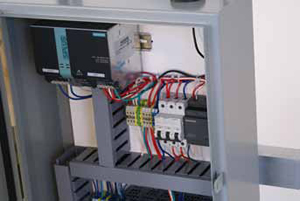 The ballast pan of the TT & HT Solar Trackers that floats on high- or low-density ground is a game changer -- but not the only innovative offering. Trabant’s automation and controls technology partner, Siemens, provided the tested technology that adds instant credibility to the Trabant Trackers on every continent, Sade said. “Siemens is a technology oriented company, and the quality of Siemens personnel is outstanding,” Sade said. “Siemens has a network of technicians and engineers who fully understand the entire market. That gives our customers added confidence. The name Siemens alone is absolutely a value add.” The brains of the Trabant Solar Trackers is Siemens extended temperature range rated Simatic® S7-1200 SIPLUS controller with onboard Ethernet communication. The controller is a standard controller enhanced to handle harsh environmental conditions. Housed in a combiner box, the system includes outdoor rated devices including a 24vdc power supply for linear actuator power, a RS485 Serial interface for Modbus Serial line actuator communication, RS232 Serial communications for GPS clock and wind sensor and DC string combiner and fuses. An optional touch screen operator panel is also available. “The controller and HMI open Ethernet communication gives the customers a great deal of flexibility when selecting a PV inverter,” Sade said. “We can go with micro inverters, string inverters and even central inverters. Their choices are unlimited and they can design the system with no limitations.”

The controller is preprogrammed with Simatic Step 7 Basic software with easy to use function blocks that are part of a Solar Library developed by Siemens. The solar positioning algorithms at the heart of these function blocks were developed by the U.S. Department of Energy’s National Renewable Energy Laboratory (NREL). The algorithms know the exact position of sun for the next 100 years and enable each controller to position the trackers to maximize the incident radiation, thereby maximizing the amount of energy generated. The controller is also capable of reporting system and operational diagnostics out of the actuator via the operator panel. Sade pointed out that because the controller is preprogrammed and the combiner box already wired startup is reduced from more than a day to just minutes.

“Once the GPS is hooked up and the controller knows position or latitude/longitude coordinates, the controller automatically acquires the time signal, position of the sun, automatically updates the position of the tracker and drives the tracker to its optimal position for maximum energy generation,” Sade said. “That makes all the difference in the world, especially for field technicians. Rather than doing a lot of complex programming it makes it easy for the customer. It even automatically positions the panel for storm conditions or maintenance.” Additionally, one sensor for wind alarm can be shared with other controllers in the solar park and automatically park the arrays in case of a storm. 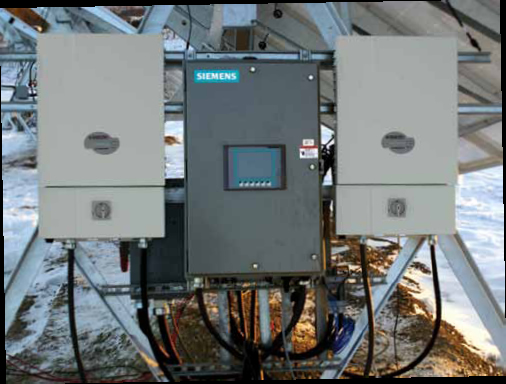 Sade said his customers measure profit by cost per watt. Keeping hardware and installation costs low while generating the most watts wattage possible defines ROI. By using an RS485 cable, the S7-1200 controller can control actuators installed on up to 25 other trackers. This scalability, inherent with the S7-1200 controller, can be utilized for both large and small systems giving solar farm owners almost unlimited potential for adding new arrays. We are 25 to 42 percent more efficient than fixed mounted systems and our standalone solution can compete with utility grade trackers. This makes us very competitive on mid- and large-scale projects.”

Off The Shelf Products, Worldwide Support

“The reason I chose the S7-1200 over other controllers was because of the reliability, availability and standardization of the product around the world,” Sade said. “Electronics are critical on the tracker. Most trackers have reliability problems in the control panel. The solar panels stop and don’t move. I wanted a product that creates the most reliable tracker in the world.” Every S7-1200 comes with a memory card. In the event of a failure, a new controller is available off the shelf at electrical distributors on every continent. Replacement is easily accomplished by reloading the program from the memory card, Sade said. The availability of remote monitoring and diagnostics further enhances troubleshooting and maintenance, he said.

“We can also store the data on a laptop and go online to restore the data or reprogram the controller very easily,” Sade said. “But more than that, Siemens knows the Trabant Tracker. In fact, Siemens held a training session in Richmond, Va., for its U.S and Canadian application engineers to support the tracker.”

Today, Sade is receiving RFQs for the TT and HT Solar Trackers from around the world. He said his technological partnership with Siemens has given Trabant Solar instant credibility for a low risk solution.