Since the renewable energy electrical system would routinely deliver more electricity than the WTP would use, the extra power ( above and beyond what was stored in the battery system) would be converted into Hydrogen (and oxygen) using a 20kW fresh water Electronic Hydrolyzer . 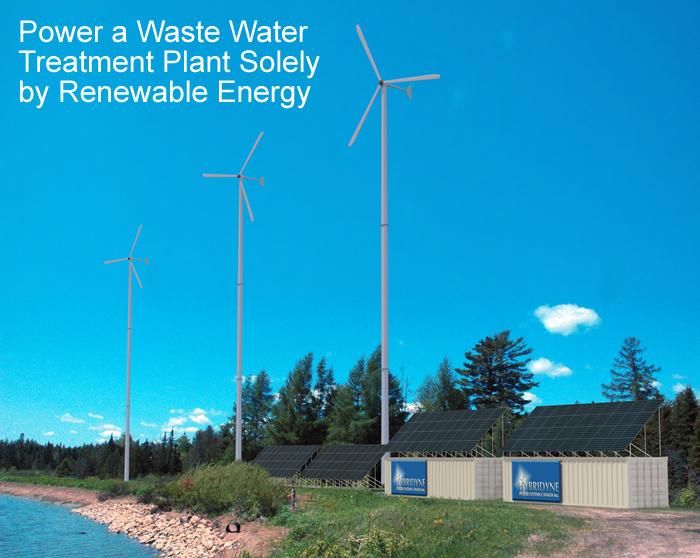 The Village of Sundridge was faced with the two-edged sword of opportunity.

Until Highway 11 was turned into a 4-lane expressway, Sundridge was perceived as being too far north to benefit from the wave of “cottage country” prosperity  that  had reached Gravenhurst, Muskoka, Bracebridge, and Huntsville in turn as each came into the 2-hour drive perimiter from the GTA.  But now the highway expansion was reaching Sundridge, decreasing travel time and increasing safety dramatically and the population was expected to increase as potential cottagers who lived in Southern Ontario now found this beautiful Village and the nearby Bernard Lake to be within driving range.

One edge of the sword was the prosperity offered by being ‘the new Muskoka’, and the other edge was the infrastructure improvements which would be necessary to accommodate the inevitable population increase.

Sundridge had been using “settling ponds” for wastewater treatment, but based on a existing seasonal overcapacity and the expected population increase,  the Ministry of the Environment was mandating a full and modern Wastewater Treatment Plant ( WTP ).  One of the items that was going to make this an expensive project was the fact that the location of the WTP was 7 kM away from the nearest 3-phase electrical line, and that length of a 3 phase pole-line was going to cost the Village about an extra million dollars.  The design and building consultant, Aecom,  in their usual thorough fashion, offered a possible alternative solution – why not power, or partially power, the facility with Renewable Energy ? thereby saving both the cost and long term real estate and environmental impact of a power line and also the long term cost of the consumed electricity  !  The Village was enchanted with the idea and commissioned Hybridyne Power Systems Canada, a Canadian leader in high-reliability Hybrid Renewable Energy Systems, to do a feasibility study.  The study showed that the proposed Hybrid Renewable Energy power system would pay for itself in about 15 years, and save approximately 326 Tonnes of Green-House Gasses from being produced every year.

The Hybridyne offering was designed to produce energy through a Renewable Energy system consisting of twelve direct drive, high efficiency 10-kW wind turbines ( yielding about 567,648 KiloWattHours per year ) and 48 kW of Photovoltaic solar panels coupled with Hybridyne’s high efficiency conversion system (Yielding about 83,885 KiloWattHours per year).  Also there is a small cottage/residential single phase power grid nearby which would be used as a backup and supplemental energy source. The system  would use Lead calcium “wet cell” batteries, as a “buffer” for periods of over-generation ( too much solar and wind generation) and as a “redundant power-loss backup protection” ( similar to the Un-interruptable Power Supplies used in data processing centers) The System was designed to be  capable of supplying the load at full capacity 7 x 24 (every day) ( the batteries were designed to last at least 10 years), with enough deep discharge capacity for 7 - 10 hours of power with no input from generation or grid, with an additional emergency reserve of 5 hours for emergency backup in the absence of input from the renewable resources.  This proprietary system, designed exclusively by Hybridyne, using Hybridyne proprietary, patent pending technology and methods would be the first time such a system would be used to power a municipal WTP.

When the MOE decided that the local power grid was unacceptable ( not reliable enough) as a backup to the Renewable Energy system, they demanded the addition of a diesel genset. Accordingly, the design was augmented by the addition of the diesel Genset and Hybridyne added a Hydrogen Hydrolyzer.  Since the renewable energy electrical system would routinely deliver more electricity than the WTP would use, the extra power ( above and beyond what was stored in the battery system described above) would be converted into Hydrogen ( and oxygen) using a 20kW fresh water Electronic Hydrolyzer .  The Hydrogen would then be stored and used to augment the Diesel genset in a dual-fuel ( Hydrogen/Deisel) mode ( if, and when, it was needed ). The injection of Hydrogen into the Diesel’s air/fuel mix would decrease fuel costs and dramatically decrease exhaust pollution by up to 50%, while also reducing diesel maintenance costs, as it would be running cleaner.  Additionally, since the Diesel would rarely be needed, the accumulated surplus Hydrogen from overgeneration by the renewables could be used to help power some ( or all) of the Village’s work trucks –( also in a dual-fuel mode )  further decreasing the municipality’s operating costs and carbon footprint.

The net result of this design was a WTP with a high reliability power system, totally powered by Renewable Energy, backed up by a small residential power grid and dual-fuel genset, capable of paying for itself through  the savings compared to the consumption of ever-more-expensive grid supplied electricity.  The system would generate no greenhouse gasses except the small amount from the Diesel Genset in the rare occasion when it would be needed, and that small amount further mitigated by the use of Hydrogen as a blended fuel.

The Village of Sundridge was pleased about being the host of a world first exhibition of industry-leading Canadian know-how, and excited about sharing this concept with other Villages in Northern Ontario and worldwide in developing nations, all with similar challenges – modern infrastructure which needed lots of reliable, and otherwise expensive and/or hard-to-reach electricity.  Hybridyne were equally pleased because this would be a pilot project further applying their proprietary and patented Hybrid Renewable Energy system in a new application, an Ontario-designed wastewater treatment system / concept which could  be used throughout Canada and exported worldwide. Aecom were pleased that one of their environmental projects would be carbon-free, and also enjoyed the larger appeal of a worldwide audience.

Funding for the project was to be from the Federal Government, the Provincial Government and the Village of Sundridge in equal thirds.

In November, 2008, the Village and Aecom applied to the Building Canada Fund ( BCF ) – Communities Component  Program and were successful in getting some funding approved from the Province and from the Federal government. The application for the BCF program was submitted quite early when the project was in the second public consultation stage of the Class EA, so final costs and detailed design ( including the addition of the Renewable Energy System) had not been completed. Thus when the final results were in, the amount required for the project was much more than the funding approval received.

The Renewable and Clean Energy Application was submitted September 14, 2009 and the Village were notified on January 11, 2010 that it was not approved, and they were told that the application met all of the requirements for funding but that there was not enough funding available for all of the submissions.

In between formal applications for funding, the Village and Aecom spoke to various downstream communities including local First Nations.  The Village received a letter of support from the Chiefs of Ontario  and several other municipalities as well as the local MP. In the meantime, Hybridyne engaged the services of Sussex Strategy Group, a well known Public and Government relations firm out of Toronto, and with them visited any Minister and Ministry office at Queens Park in Toronto who would listen. The results were lots of expressed verbal interest and support but no financial assistance.  It bears pointing out that the amount of effort and research done into possible sources of funding for a municipal project was disproportionately large in relation to the size of the project  ( due in part to its uniqueness) but nevertheless significant and expensive for all parties involved.

The Village ran into multiple bureaucratic and government policy roadblocks :

To date the project has not yet moved forward.  Because of the main upgrades ( some of which were required by the MOE )  the available funding is far short of what is needed.  The timetable has been negatively affected by of the lack of funding approval and by delays waiting for the various funding applications which had been submitted serially as opposed to concurrently which is a government funding application imperative.

Because  the Village of Sundridge have been very diligent, ensuring that the applications are presented with accurate and correct information, the process has been very expensive in terms of both capital outlay and time.

At this point in time :

Sundridge Village Council is extremely disappointed that they have been unable to power their WTP with Renewable Energy :

It is very discouraging to have to point out that while the Provincial and Federal governments often make fine speeches and fill newspaper articles with fine words and rhetoric about their and their respective parties’ commitment to the environment and their support for Ontario- and Canadian-based Industry, their actions on those commitments seems to fall far short of actually helping a worthwhile project to happen.  In fact it often appears ( although almost counterintuitive )  that the more worthwhile a project appears to be, the less likely it is to see proper funding.