You climb in and start your car. Reverse out of your driveway using the gas-powered system. Putting the shift lever into neutral, the system switches over to the AED (Alternative Electric Drive) system, yet your engine is idling. This allows you to use your power brakes, power steering and air-conditioner on that hot muggy day.

It was the summer of 2007 and gasoline prices were steadily creeping up nationwide. When those prices hit the $4.00 per gallon mark in the foothill communities north of Sacramento, California, disable veteran Joseph Vargas knew he had to find another way to stretch his VA benefits. He had already traded in his V-8 gasoline engine vehicle for a more economical PT Cruiser with a 4 cylinder engine. Even with going from 15 mpg to 25 mpg, it still wasn’t enough to meet the daily costs of living.

The rising cost of gasoline was the immediate problem. Gasoline is an unusual product; it can’t be grown in a backyard garden or bought in bulk and safely stored in a suburban or urban environment. Even with using the cheapest of the 3 grades of gasoline available it was rough. Joseph believed electricity was the best alternative. There are a variety of ways to make electricity including solar, wind. He could have set up a bicycle in the backyard with a generator and get some exercise. However, if he needed to go any where, he had to buy gasoline.

Hybrids and electric cars were being developed for consumers, yet the cost was beyond most peoples’ means. As with most ‘new to the market’ products, there are kinks still to be worked out with the current technology by the automobile industry. The price paid for the PT Cruiser might make the down payment on a hybrid, but the payments went beyond his budget.

Driving down Hwy 395 in Reno, Nevada, Joseph realized his vehicle had an un-powered rear axle. The seed if inspiration took hold. If he could solve the challenge of attaching an electric motor to the under-utilized resource of the rear axle on his front-wheel drive vehicle, and to the wheel, this could work.

Up to that point he figured that electrical powered vehicles would take many years to become practical to the average consumer because of cost. But, with this idea of an after-market electrical drive unit that can be added to the front-wheel drive vehicle you are driving today, devising a way to use current technology and equipment in use today it would create a cost-effective solution of gasoline versus electric drive for himself and the estimate millions of front-wheel drive vehicles on the roads today.

After four years of development, trial and error, there are now two patents on this idea. The cost in most cases is $4 to $6 thousand dollars. Joseph estimated that if you drive 12,000 miles per year, this developed unit will pay for itself in less than three years.

There were four specific issues to solve in reaching the goal of creating a consumer and user friendly after-market electric drive unit.

The first issue was solved in using the non-powered rear axle. 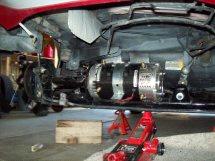 The second issue was designing a complete electric drive axle unit  to replace the standard non-powered rear axle for easy installation. This design allowed for the addition of plug-in rechargeable electric  power to all new and used front-wheel drive  vehicles with little or no alterations to its’ original design. 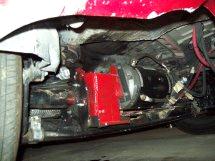 The third and most vital aspect of this unit is to be user friendly. The switching system between gasoline power to electrical power. This was accomplished with the design of two switches. One switch is for the accelerator pedal, allowing it to move back and forth from electrical power to the standard gasoline power system. The other switch is for the shift lever. This allows the vehicle to be shifted into neutral for the electrical drive and back to drive or reverse to use the gas powered system.

The fourth need was the storage solution for the rechargeable battery packs and was designed to use minimal trunk or vehicle space.  With battery technology always improving, getting smaller, etc. space becomes objective.

The goal of mass production for these after-market units were kept in mind when designing and the development of these patents. It is projected the AED (Alternative Electric Drive) could be made available for distribution to the public in 12 months.

According to the Department of Transportation and USA.org there are 240+ million registered vehicles in the U.S. as of 2010.

At this time there is no after-market electric drive unit available on the market to compete with.

The consumer could potentially reap benefits both environmentally and economically.

There is the potential for IRC 30D tax credit once the manufacture of the patents passes the EPA Clean Air Act guidelines for Plug-in Electric Vehicle Conversions. MPG savings are better understood if you imagine it from the drivers’ point of view.

You climb in and start your car. Reverse out of your driveway using the gas-powered system. Putting the shift lever into neutral, the system switches over to the AED system, yet your engine is idling. This allows you to use your power brakes, power steering and air-conditioner on that hot muggy day. You move forward and decide to fill up your tank on your 4 cylinder motor before you start your day. Here’s the breakdown on mileage; 1 hour of idle time will use about a pint of gasoline. Remember, there are 8 pints in a gallon of liquid. In ideal conditions, this means you have 8 hours of engine idle time to a gallon of gas. On this day you are going to work, hit the store on your way home after picking up the kids from daycare, say 30 miles and average 40 mph. Lets say you use that air conditioner (hot muggy day remember) so now your car is using 2 pints per hour, a gallon every 4 hours. With that average speed you would get 160 miles per gallon, and that is a pessimistic view per Joseph.  Ideal circumstance, freeway driving at 65 mph, could average 520 miles per gallon. As for how much electric power, depends on how you customize your battery packs and the size charge you decide to use.

When considering performance all should be equal.  Everybody is using the same battery technology and similar electric motors.  The big advantage that we have is the use of existing vehicles and that the AED can fit on any front wheel drive vehicle.  One difference will be is that the AED battery packs do not have to power safety and comfort features such as power brakes, power steering, air conditioning and heat.  These features are powered by the idling of the gas motor while running on electric power.

Also one must take the time to decide what they would do if the AED unit was available and you were faced with the decision of whether to buy an EV or add electric drive to the vehicle you are driving.  There is another advantage with the AED unit and that is that a complete charging system can be installed on the gas motor.  With this unit you have two separate sources of power and with the electric power equal to the performance of an EV.

With Josephs’ insight, hard work and incentive, he created a viable, user friendly application anyone with a front-wheel drive vehicle can utilize. He has decided to sell the patents through an on-line auction in hopes to see the next step in bringing his technology to the public, creating a budget friendly, alternative solution. The dates are July 30 thru August 2, 2012, Lot# 1178 at www.ipauctions.com. You can also visit Joseph Vargas’ website; http://autoedrive.com/

EDAK, LLC is the owner of record as recorded by the U.S. Patent and Trade Mark Office. The patents and technology are being offered through auction with IpAuctionsä, Inc.

IpAuctions™, Inc has provided on-line auctions specializing in intellectual property since 2001. Go to www.ipauctions.com or call Ms. Davel Foote, 866-826-1300 for more information on the AED technology and auction details.