The CSP industry is going global in an unprecedented rate and there is no way to understand it by confining its development it to one market only. Make no mistake, despite the difficult times, the industry will persevere through the challenging times ahead… but the companies that do not adapt to its changing nature will not.

CSP Industry - Adapt or Else

If you want to have an accurate description of the CSP industry worldwide today, first you must forget everything that you might have read about it over the past few months.

I am not telling you anything you don´t already know: industries have globalized. They have evolved from the traditional industrial development we have witnessed  over the past few decades and are now globalizing rapidly. It is relatively easy to observe this phenomenon in the solar industry, especially in the CSP sector.

The reason is simple – we are a young industry with to-be-expected  growing pains, but we are also expected  to compete at a global level. In fact,the strength of the industry comes from its globally diversified nature.  For you, this means that taking the international business model approach is the only possibility if you want to increase market share. Adaptability to new markets and its idiosyncrasies is the key to your success.  For that, you have to understand and learn the rules of the game to win.

CSP has been commercially deployed since the early 80´s in the SEGS plants in California. The plants are still there today, producing energy long after their financial payback time came to an end.  They are producing free electricity 30 years on.

Still, the CSP industry has had a long break since the original SEGS were constructed (give date?).  The hiatus lasted about 20 years and - other than governmental R+D developments happening during that time. In a relatively short period of time from 2006 we have seen an industry  reborn and thriving with the feed in tariffs in Spain and loan guarantees in USA. It further took a huge scale turn with the governments of India, South Africa, Australia and the MENA region (to name but a few) taking the technology to a brand new level of adaptability to new markets. And this is only the beginning of a long road for a very adaptable industry.

From 2006 we have achieved very remarkable cornerstones, including the first plant in the world with the ability to operate 24 hours, a storage technology that can be scaled,  the construction of CSP plants of an unprecedented scale (280MW) and the emergence of innovative technologies (namely towers and Fresnel) deployed into the hundreds of MW. That is a lot to achieve in just 5 years – but this is just the beginning. With so many markets working synchronously the real leapfrog developments will happen in the newer markets. 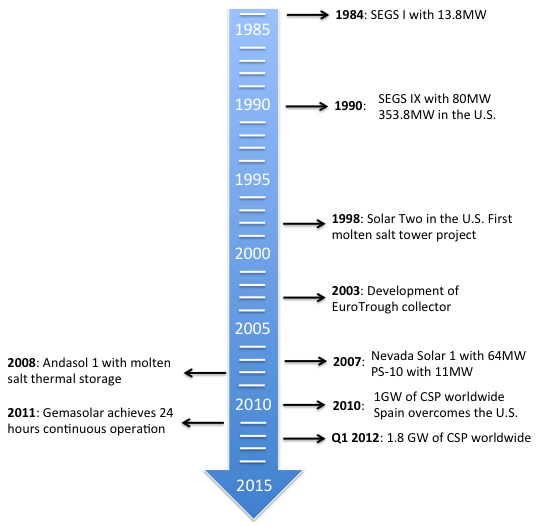 The CSP Market as it stands

CSP’s current installed and operating capacity is just shy of 2 GW which will be achieved in the coming months as plants under construction are finalized and commissioned.

As the CSP sector changes rapidly it is required to adapt to the emergence of new markets whilst gaining prevalence over the so far dominant but currently challenged Spanish and U.S. markets, due to feed-in tariff discontinuation and to the abundant and cheap shale gas prices for example.

Today there are more than 60 utility-scale CSP operating plants worldwide and 1.8GW of installed capacity. Distributed over 9 different markets, it is Spain (1.2 GW) and the U.S. (500 MW) which still dominate the CSP landscape, accounting for 95% of the total installed capacity. This dominance is likely to change as the plants under construction get commissioned and new regulatory frameworks are revealed, and government support of some markets gets clarified.

Emerging markets such as India, South Africa, Morocco and Saudi Arabia will therefore play a vital role in the growth and sustenance of the CSP industry. Others countries have also shown interest towards CSP and may contribute to its market expansion. Last year alone, almost 500 MW of new capacity was deployed, a record year to date in the history of the CSP industry, and in the future capacity will increasingly be coming from emerging markets

In Spain, most of the yet to be commissioned projects will be connected in 2012, while the larger projects in the U.S. will require longer construction periods and will be online during 2013-2014. When the current plants under construction are completed, Spain will remain the largest CSP market with 2.2 GW closely followed by U.S. with 1.8 GW.

However a clear internationalization trend emerges when observing the charts of Operating CSP Capacity and CSP capacity under construction. From the operating chart a total of 89.6MW (Excluding Germany) are in operation outside of the main markets of Spain and the US. However this jumps up to 782.7MW that are in construction outside of the 2 main markets. That is more than 800% increase on installed capacity in the new markets. If you consider the planned capacity above and beyond the capacity in construction, the percentage will likely be higher but some of the projects in the pipeline may not be completed. 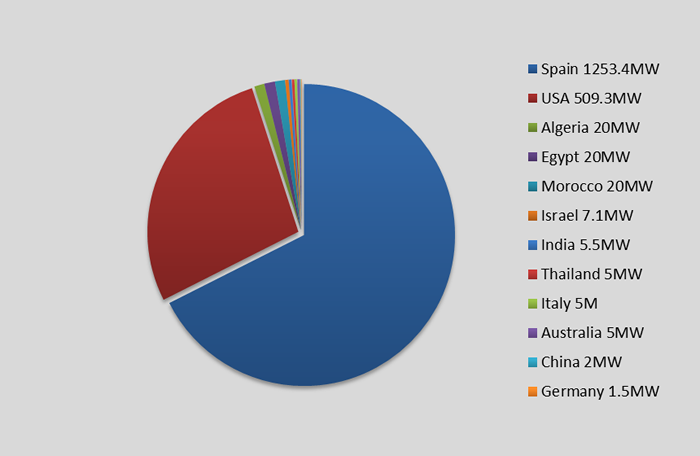 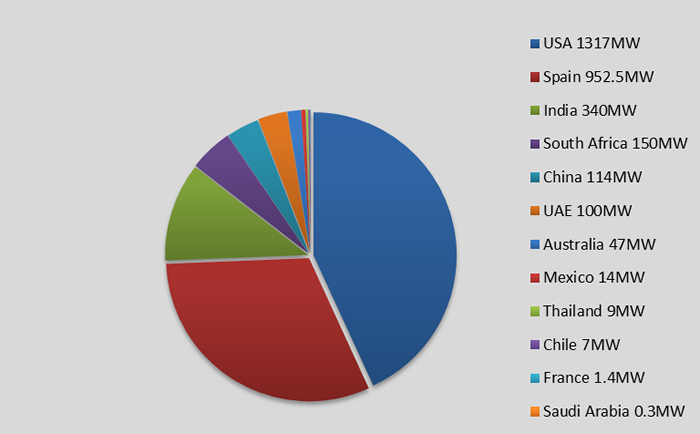 The future trends are increasingly pointing towards a much more internationalized industry with several projects under construction in other promising new markets. The table below details the extent of development of each geographical market including currently operational, in construction and proposed plants. The CSP Today Conservative Prediction of Global Installed CSP Capacity chart exemplifies how in a few short years emerging CSP markets will equal the amount that the main markets will contribute towards the global CSP market.

This trend also has interesting ramifications. For example, the industry is starting to indigenize very heavily in countries such as India. As own local technologies are been researched and deployed, the industry in emerging markets will become increasingly open and the hold of a limited number of experienced companies and suppliers will loosen. As many as 8 tube receiver manufacturers are springing up in China for example, and Fresnel technologies are going big scale in India and Australia. The game is changing.

The key to success in emerging markets is to understand what the need for CSP technology is and adapt to it. Here is where your company has to take a conscious decision to adapt to succeed. Think about CSP plants as if they were cars – I call it the Rolls-Royce theorem - they might be the best cars in the word from the engineering perspective   but that doesn’t mean that they are what you, as a user, need. You might need a cheaper car or a more efficient one. One size DOES NOT Fit all. Understanding this will make all the difference. And as our prediction shows, emerging markets will account for 50% and onwards of the global CSP market so there is a lot at play still.

Some of the exciting international projects that are opening up new markets are also requiring adaptation to their particular conditions from the outset. For example, Fresnel technology is increasing heavily used due to lower costs of deployment (more on that in the technology analysis section). Also, there will be increasingly more integrated solar combined cycles in which CSP will be appended to existing coal and gas stations. A few examples from the some of the most promising CSP world markets:

Living proof of Internationalization: The case of Abengoa

If you needed further proof that internationalization is the way forward, you just have to look at the data for the leading company in the CSP sector. The Sevillan company had an early start with PS 10 in Sevilla and then went on to build PS 20. Most of its portfolio of plants are still in USA and Europe where they are currently constructing 710MW of PT. Under the capable hands of Micheal Geyer, head of internationalization, their portfolio is increasingly global with the latest additions been a total of 150MW (2 plants) in South Africa following the near finalization of construction of Shams in UAE.

Abengoa is the perfect company to illustrate internationalization because their business is clearly geared at taking advantage of all the emerging CSP markets opportunities, with small scale projects taking place in most of the up-and-coming geographies for market positioning.

You can expect – and certainly there are plenty of rumors going around – that Abengoa will be heavily involved in the newest markets in the CSP scene, particularly Chile and Saudi Arabia, where many companies are focusing their efforts.

This global focus gives Abengoa a resilience and strength within the industry that is unique and it is building a huge track record worldwide despite its origins as a relatively modest Spanish company , especially  if you compare it in size to other industry players such as Acciona, ACS Cobra or Siemens.

Technology is the key component to market adaptability. Today, parabolic trough collectors remain the most used technology, accounting for 96% of operating capacity worldwide. This is currently the most mature and proven technology and is thus the preferred solution chosen by developers, EPC companies and financial institutions. However, other technologies are gaining attention as more cost-effective solutions and will therefore have a greater share of the installed capacity in the near future.

Fresnel technology is also gaining attention in the CSP market, encouraged by the remarkable cost reduction potential with respect to parabolic trough and tower. Although it is the least efficient of these technologies, the relative simplicity of the technology makes it very suitable for emerging markets.

Linear Fresnel is considered by several developers as a very promising technology and several companies are now supporting and investing in this technology. Indeed, ABB became a 35% shareholder of the German company Novatec in 2011, while AREVA bought the Australian company Ausra in February 2010. The third large company to get involved in Fresnel is GDF Suez, and is currently working with the Solar Power Group to develop a solar field booster for a coal power station in Chile.

CSP Today has been serving the concentrated solar power industry since 2007 with focused events, news briefs and reports. We now have a direct relationship with the industry in Europe, USA, MENA, India, South Africa and beyond.

In 2012, we are taking our focused CSP industry approach to Thought Leadership and analysis to the next level. CSP Today is evolving to provide impartial up-to-the-minute information that companies across the CSP spectrum can trust to inform their decisions.