As Cambodia is located in one of the sunniest areas of the world, solar power provides an excellent solution to the reduction in kerosene use: it's safe; reliable; and easy to use.

Access to a reliable energy source is essential for development, but after decades upheaval the construction of energy infrastructure in Cambodia has been slow. Currently roughly a quarter of the population have access to the centralized electricity grid, meaning that roughly 10.6 million Cambodians, mostly in the rural areas, live without.

They resort to using kerosene lanterns, car batteries and diesel generators, which are expensive, time consuming, detrimental to health and often downright dangerous.

As Cambodia is located in one of the sunniest areas of the world, solar power provides an excellent solution to these problems: it’s safe; reliable; and easy to use. Also, after the initial expenditure the running costs are negligible. 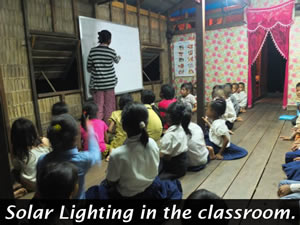 The quality of light from solar lighting kits empowers people by allowing them to continue studying or engaging in other earning activities (such as making handicrafts or running a local shop) after the sun has gone down. Several companies have tried and failed to realize the massive potential for Solar in Cambodia, but one company, NRG Solution, believes they have found the key.

NRG Solutions was established with the goal of providing appropriate and affordable solar energy solutions to Cambodia. After forming as part of an NGO, and after testing different models and approaches to the distribution of solar energy into remote areas, the decision was taken to transition into a social enterprise, order to make the model more sustainable and scalable.

Their approach is simple quality products and an emphasis on service. NRG are building networks of entrepreneurs to whom they offer constant training and support and push the emphasis on quality and service. By engaging local people in the model, not only does NRG create jobs and give people new skills, but also expand their reach deeper into the remote rural areas where solar can make the most difference.

So far this approach has yielded success and NRG has quickly gained a reputation for this focus on top quality products and for providing excellent after-sales service and maintenance for the end-customer. This builds trust in rural communities, which is especially important when bad products and poor service have given solar a bad name.

Their latest project, builds on their previous experience and is focusing on establishing a solar distribution network in Kampong Thom Province, where they have established a partnership with a local Micro Finance Institution. By offering a range of custom designed “Solar-Loan” products, they will remove the barrier of high upfront-costs which will give solar an added edge over traditional sources of energy.

At the center of the network will be the “Solar Shop” which will act as the management hub and will host training, stock, awareness raising and, the all-important service technicians. By removing the access barriers and providing education on the benefits that solar can bring, NRG is placing itself very well to give light to thousands of homes across the country, and with the network is set to launch next month the demand is already rising. Solar power in Cambodia has a bright road ahead. 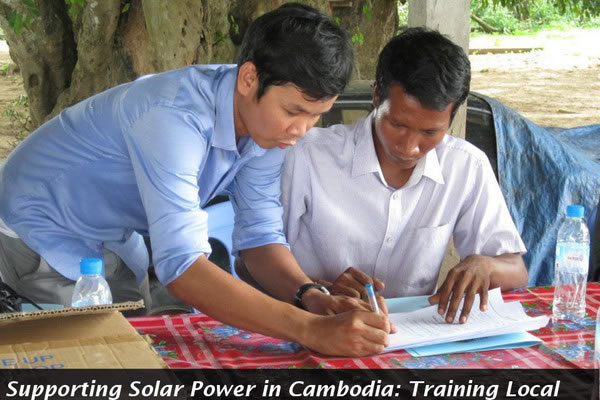 NRG Solutions is a registered member of the Energy Access Practitioner Network, supported by the United Nations Foundation. The Network serves as a platform for all energy access organizations that contribute to the United Nations's 2030 goal of sustainable energy for all."

To learn more about this project and NRG please visit the project page and the NRG Website.

How a project comes about – Previously we have worked all across Cambodia, and have distributed products in 9 provinces. At the end of 2012/start of 2013 we decided to take a step back and focus on 2 key areas (Mondulkiri Province & Kampot/Takeo Provinces) to refine our model. We chose Mondulkiri as we had seen a high demand in this area and an existing group of the entrepreneurs. We chose Kampot/Takeo as we had an agreement to work with a local MFI who provided loans for our solar products. In Mondulkiri we have seen cash sales, and in Kampot/Takeo we saw that the loan was very popular – roughly 17% of all the MFI’s loans are for our solar products, both of which clearly demonstrate a demand for solar when there is adequate education/support.

The Kampong Thom Project – came about as we sought to build on successes in each of the other 2 projects. We have added the idea of our solar shop which will act as a training/service base (and facilitate the loan applications), having previously had a roaming technician providing service in K/T. We have also been selected to develop the project in partnership with an International NGO and Local MFI . The NGO have been supporting the network development and design of the loans through the MFI. Although this project is a natural progression of NRG’s activities it also forms a pilot phase for the NGO’s wider project with a view  to further support in developing a national network and expanding the loan availability nationwide.

Funding –We have had had no outside investment or funding, instead we worked up from nothing and have also used crowd funding at different stages, such as: kiva; kopernik; and currently have a Indiegogo campaign which we are keen to promote.

Project Implementation – Initial phase is to identify the area we want to work. Then we works to raise awareness (there is a very active NGO here in Cambodia who run several solar roadshows to raise awareness across the country and identify entrepreneurs; then we train the people interested in becoming an entrepreneur – first about solar and its benefits, then about the products and how to sell including some business planning for them, finally about servicing and maintenance. Then the entrepreneurs will go out and sell, using our solar shop as a base to get new stock and to facilitate the loans for the end-users. In this case the MFI will also help to promote and so (as in K/T) we will give training to the MFI Staff as well as they may often be making the initial contact.

Project Benefits – to the entrepreneur: business skills & extra income. To the end-user: more time as they don’t have to take car-battery to be recharged, improved health (especially women & children) due to reduced exposure from the toxic fumes given off by burning kerosene, more money the total cost of ownership is less than the dirty alternatives (solar lanterns ~$1.40/month; kerosene ~$2.00/month; Solar Home System ~$5 –8.00/ month; diesel generator ~$6.40 - ~$17.00.

EPN – also selected for incubator for EME NRG was selected to be a part the Emerging Markets Entrepreneur (EME) business incubator, which is finance by IFC (part of the World Bank), and have been working with them for the past year to help us structure the business and develop our 5 year growth strategy

Other – In terms of the Company we also have sold products to various NGOs etc.. for their projects and have another arm of the business which focuses on custom designed systems the latest of which was in the heart of the Angkor Wat Complex