As CHP systems can tap into a wide array of fuels to operate including coal, biomass and natural gas, there are few restrictions on where they can be installed.

Sometimes what’s old becomes new again and “cogeneration,” which is over 130 years old, is gathering momentum across the world.  “Combined heat and power (CHP), also known as cogeneration, is the simultaneous production of electricity and heat from a single fuel source, such as natural gas, biomass, biogas, coal, waste heat, or oil,” reports the United States Environmental Protection Agency (EPA).  Cogeneration was likely first introduced by Thomas Edison in 1882 at his Pearl Street Station which combined heat and power, producing electricity and thermal energy.

Over the past decade, the Energy Department has been working to grow the CHP market and “between 2009 and 2012, the partnerships have provided technical support to more than 440 CHP projects -- helping U.S. manufacturers, businesses, hospitals and universities understand how CHP can improve their bottom lines, lower energy bills and help protect air and water. America’s current installed capacity is about 82 GW of CHP at over 4,100 industrial and commercial facilities according to the EPA. President Obama seeks to increase the number of cogeneration plants in the U.S. by 50% by 2020. 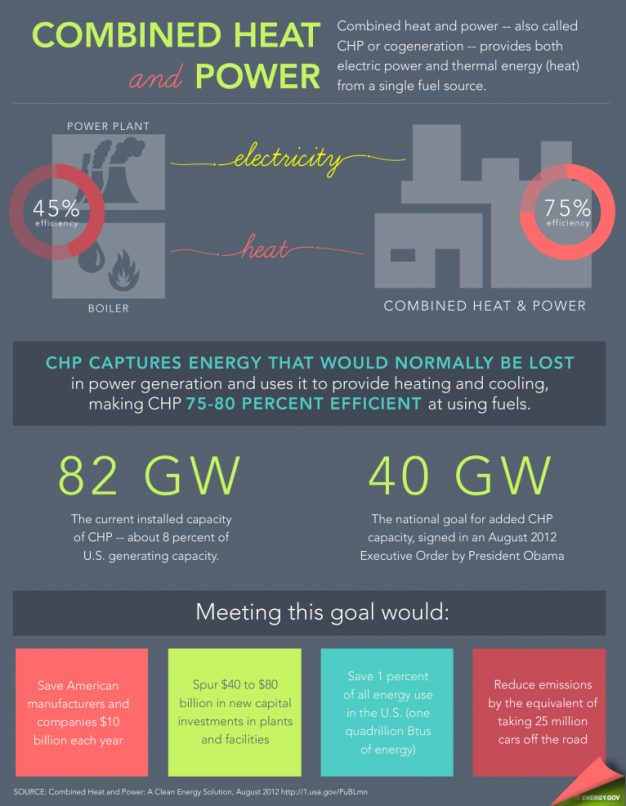 In Canada, cogeneration represents about 7% of the naturally produced electricity generation according to the Power of the Future with Alberta and Ontario boasting many large industrial cogeneration facilities which receive government support in the form of grants and subsidies.

Our company, Fortress Paper has made a significant investment in cogeneration at our Fortress Specialty Cellulose Mill in Thurso, Québec where we have expanded into the renewable energy generation sector with the construction of a co-generation facility and are upgrading the onsite cogeneration facility to produce up to 25 megawatts of green energy.  We also entered into an energy supply agreement with Hydro Québec to provide green power to the grid over a 15 year term.

Beyond North America, other continents have been touched by the energy-efficient, environmentally forward CHPs. Not confined to industrial and manufacturing sectors, cogeneration facilities can be found in schools, apartment complexes, hotels, nursing homes, colleges and even breweries. In Islamabad, Pakistan, the government is now allowing cogeneration producers to supply electricity directly to industrial consumers including sugar mills. In the Caribbean, Red Stripe brewery seeks to cut electricity costs by as much as 50% and lower its carbon footprint with its new cogeneration plant. Tuas Power, one of Singapore’s leading power generation companies and provider of energy solutions, started up its latest 406-megawat gas-fired cogeneration plant. Macquarie University is “the first cogeneration system in Australia to use combined power, heat and cooling with chilled water storage.”

In the European Union, over 11% of its electricity is produced using cogeneration with Denmark, the Netherlands and Finland leading the cogeneration charge. Cogeneration saves Europe around 200 million tonnes of CO2 gas emissions annually. European governments turn to organizations such as the Belgium-based COGEN Europe, whose primary “goal is to work towards the wider use of cogeneration in Europe for a sustainable energy future.” Europe’s COGEN research indicates that at least 25% of electricity production could come from cogeneration in the next 20 years.

Organizations seeking to establish energy-efficient CHP systems can turn to any number of organizations for guidance including the World Alliance for Decentralized Energy (WADE) that seeks to accelerate the global development of cogeneration, onsite power and renewable energy systems.

The continuing evolution to CHP systems globally requires the assistance of governments to lay down regulatory foundations and the establishment of training, safety and performance standards. Canada’s Centre for Energy™ reports that “cogeneration is higher in energy efficiency than conventional thermal generation because it reuses heat. Energy that would otherwise be wasted is put to some useful work. Because of its efficient use of energy, cogeneration is more economic and environmentally attractive than conventional fossil fuel power plants. Cogeneration can be located close to electricity consumers, thereby reducing transmission line losses. As a result, it accounts for well over half of the new power plant capacity built in North America in the last decade.”

As unpredictable acts of extreme nature like Superstorm Sandy occur, CHP systems can play a lifesaving role in keeping hospitals running when the electricity grid goes down.  As CHP systems can tap into a wide array of fuels to operate including coal, biomass and natural gas, there are few restrictions on where they can be installed. We can all make a positive contribution to our planet by using a cleaner energy supply.  Building by building, market sector by market sector, we can reduce greenhouse gas emissions and improve the overall air quality.  If your organization is deciding whether to move to cogeneration power, be sure to visit the Environmental Protection Agency’s “Is My Facility a Good Candidate for CHP” online assessment tool to find out if your business may be a good candidate for combined heat and power.

About Chadwick Wasilenkoff
As Fortress Paper’s Chairman, Chief Executive and Founder, Chadwick Wasilenkoff, oversees the company’s production of specialty pulp, renewable energy, security papers and other security related products. Based in Vancouver, Canada, Wasilenkoff is an established entrepreneur with extensive capital markets experience specializing in the resource industry and has served as a director with various companies. For more information, visit www.fortresspaper.com.