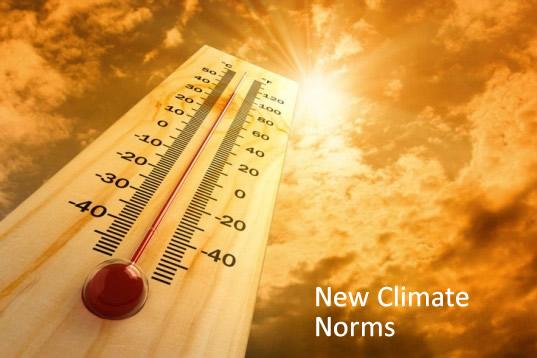 In the United States, Normals or norms are typically used to refer to climatological conditions by the National Oceanic and Atmospheric Administration (NOAA) over a 30 year average, the latest of which are 1981 – 2010. There are seven 30-year trends, which started in 1921. The reason that these norms are established by NOAA is to help farmers determine what crops to plant; how to pack for an extended trip; prepare power companies for surges in power; what day might be better to schedule an outdoor affair; and to determine whether the temperatures are increasing or decreasing overall. These norms, when compared to older norms, help to disclose if there is a warming or cooling trend.

There is a growing interest as to the amount of change in the Normals from one reporting period to another, as these norms are used for both near and long term planning across a whole host of climate applications.

The 1970s were unusually cool, while 2001-2010 was the warmest ever recorded. It is not surprising that the average temperature rose for most locations. For the United States as a whole, it was not daytime highs, but overnight lows that increased the most compared with the 1970s.

U.S. Climate Normals are part of a reliable, long-term data record that can be used for studying natural climate patterns and climate change. The information also helps people understand what conditions they can expect wherever they may live.

Longer periods of warm weather affect agriculture in many ways, such as less water in the soil, and when it rains, it is difficult for water to filter into the ground. These longer warm periods can lengthen the pest season and allow for more generations of pests, such as aphids.

Warmer nights cause the fire season to be longer, and pollination patterns to change.  A study showed that flowering plants come into bud an average of one day earlier each decade. With warmer nights and delayed freezing days, plants can now survive farther north than before.

Across the United States, the new Normals are warmer than the previous version (1971-2000). In the new report, the cooler 1970s were removed, while the warmer 1980s were added. On average, the new Normals were 0.5° F warmer. According to the National Climatic Data Center (NCDC), this difference in the temperature is primarily due to station moves and changes in observing practices or instruments.

The National Snow and Ice Data Center (NCIDC) tracks sea ice for both the Arctic and the Antarctic. Since the Arctic sea ice has declined dramatically in the past decade, the new normal extent is smaller than the old one.

Sea ice concentration on September 13, 2013 is compared to the old baseline (1979-2000, green) and the new baseline (1981-2010, orange). The baselines represent the median ice extent (half of the years were larger, half were smaller) for mid-September during the time period. The normal extent is smaller than it used to be, especially in the western Arctic.

The word normal usually means something that is ordinary to the average person. However, when the meteorologist talks about “normal,” it has a special meaning. For the meteorologist, “normal‟ is simply an index which is convenient for keeping track of weather statistics. They never expect to experience normal weather. Climate Normals were also never designed to be metrics of climate change. When the practice of computing climate Normals started back in the 1930s, the accepted perception of the climate was that the long-term averages of climate were constant. Changes from one installment of climate Normals to the next do, nonetheless, provide a crude metric of climate change impacts.

The terms "global warming" and "climate change" are often used interchangeably in newspapers and television reporting, but they are really separate things. Global warming refers to the rise in global average temperature. Climate change is how the climate of different areas around the globe change over time, and is the composite or generally prevailing weather conditions of a region, as temperature, air pressure, humidity, precipitation, sunshine, cloudiness, and winds, throughout the year, averaged over a series of years.

Climate change, such as global cooling or warming, is actually considered a common occurrence. For years, scientists have been trying to figure out what keeps glaciers continually growing or shrinking. Climate change is a part of the Earth’s history, but the speeding up of such events also seem to be affected by human activity.

So, are the Climate Normals changing? They are and it appears that there is some warming. But, is this warming an indication that we are experiencing Global Warming? Maybe, but the changes that are reported are too minimal, and measured over too short a period of time to indicate that the world is changing.

Posted by Lewis Dickens on 10/27/09, 01:01 PM
It would be wonderful if the Governor would announce a Governor's competition and award for the highest efficiency wind power assembly including the fan. There should be a University Engineering School Prize and a manufacturers prize. The now ubiquitous NASA 3 blade fans are of a very low efficiency and the 60% can be met. Time for the Governor to get the young brains a crackin' and place Michigan out front in windpower development.
Posted by Paul Belleci on 08/05/09, 03:58 PM
I would like to participate. Please send me info. p.belleci@infin8solutions.com