The test wind mast erected in a forest area in the Bavarian region of Upper Palatinate has now been recording meteorological data for over a year, with the aim of providing insights into the wind conditions prevailing at the site. The results after the first half of the project are very promising, with mean wind speeds significantly higher than predicted. Does this mean the site is suitable for profitable wind-farm operation? And can the results also be applied to other sites? TÜV SÜD's wind experts have moved a significant step closer to providing answers to these questions. 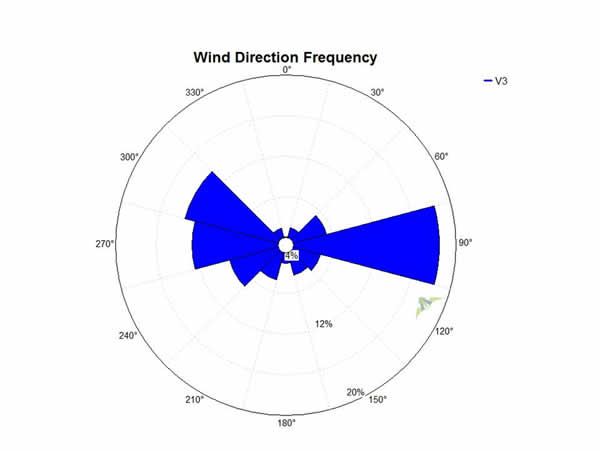 Figure 1: Evaluation of wind direction frequency shows the directions of east or west to west-north-west as the prevailing wind directions. Wind from the north or south was recorded only very rarely in the one-year period.

This is important as the local energy initiative, Natural Energy Solutions GmbH & Co. KG in Erbendorf, plans to erect five turbines to power 15,000 homes in the complex forest area near Erbendorf in Upper Palatinate. However, the cost-effectiveness and long-term profitability of the large-scale project are critical for its funding and successful realisation. To verify these two aspects, the project owners need valid data for the wind conditions prevailing at the site in order to compare the calculable investment and operating costs with the potential energy yields produced by the wind turbines. Consequently, solid predictions of energy yields are needed. The test wind mast supplies the data on which these predictions are based.

The installation of wind turbines in forested regions of minor mountain ranges is relatively cost-intensive and thus involves additional financial risks. Investment costs and the costs of erection and operation of modern large-scale, high-tech turbines with hub heights currently of 140 metres are particularly high. However, these high turbines are necessary, as energy yields at lower levels above the trees remain significantly below those produced at sites in coastal regions or even offshore sites.

Calculation models and simulations that supply informative data on open lowland areas are of only limited suitability in applications for undulating forest regions. Reliable forecasts of possible energy yields require standardised measuring and simulation procedures in order to address the complex topography on site. After all, depending on the wind direction, mountains, valleys, open strips and forest trees may influence the near-ground wind fields, causing a change in local wind conditions.

This means wind speeds at the site may actually be higher or lower than expected from the models. For this reason, as a matter of principle, the yields and reference values of turbines located nearby also cannot be used. These 'validation plants' would normally supply first indications of the wind energy potential and important operational data needed for the calculations.

But what are the real wind conditions like at the site in Upper Palatinate? The first results obtained from the test wind mast are very promising. Mean wind speed at 7.0 m/sec at 140 m above ground is higher than expected, with prevailing winds blowing from the east or west.

Another important criterion for turbine design is turbulence intensity, which gives an indication of how steady and evenly distributed the flow of air is at the site. High turbulence, gusty and swirling winds cause the turbines to vibrate, imposing stress on the rotor blades, the tower and the other components. Mean turbulence intensity at 140 metres above ground is 10.4 percent. This value, while relatively low, rises significantly at lower levels due to the topography and the trees.

The wind profile, which maps wind speeds at various heights, clearly illustrates this fact. At a measurement height of 100 metres there is a clear "blip", indicating the transition from the high-turbulence low wind zone directly above the tree crowns to the higher layer of air characterised by low-turbulence steady air currents. This finding is highly important for turbine design. Turbines should harvest the wind energy above the zone of turbulence, where the wind blows at higher speeds and more steadily and imposes less stress on the components.

Figure 3: The wind profile maps wind velocity (x-axis in m/sec) at various heights (y-axis in metres). At a height of roughly 100 metres, the measured data (black line) show a visible blip, with wind speeds increasing drastically from that height. The zone below is marked by high turbulence intensity caused by the trees in the forest. Turbulence intensity is considerably weaker in the zone above, where the air flow is largely uninfluenced by trees and topography

A look at the measurement results over the course of the year highlights another fact (Fig 4). The measured results show major seasonal variance, with mean wind speeds significantly lower in the summer than in the winter months. This clearly demonstrates that short-term measurements (using methods such as LIDAR systems) are unable to deliver representative results. Without long-term measurements there is a higher risk of significantly over- or underestimating the potential energy yield of a site. 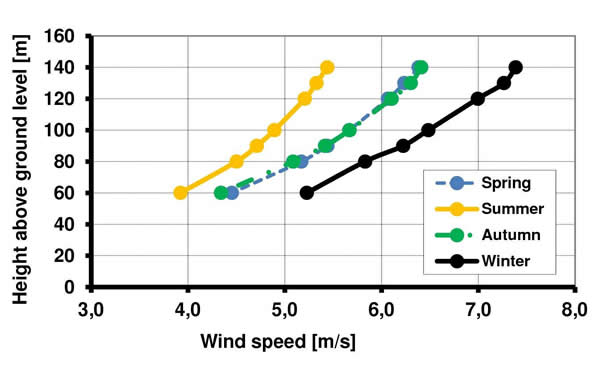 Figure 4: The measured data show pronounced variance over the course of the year. Measured wind speeds were highest in winter, and lower in summer. Given this, performance of long-term measurements over one complete year or measurements during the transition between the seasons are important to obtain valid data of the potential yield.

Starting from the data recorded by the test wind mast so far, the experts also determined the preliminary reference yield for the site. This indicator is used to forecast future energy yields and is therefore important under Germany's Renewable Energy Sources Act. For the reference yield, the wind conditions at a hypothetical average site in a coastal region in Northern Germany are used as a reference value and rated at an energy yield of
100 per cent. After one year of operation, the test site in northern Bavaria delivered a surprisingly good result. At a reference yield of around 94 per cent, the wind energy yield is roughly comparable to that of a site in a coastal region in the lowlands of northern Germany. Investors are currently considering a reference value of 60 per cent to be the minimum at which a wind turbine can be operated profitably.

The results measured by the test wind mast thus indicate excellent overall conditions for profitable wind-farm operation. The preliminary reference yield of over 90 per cent proves that inland locations on minor mountain ranges also offer suitable wind-energy sites. However, no conclusions regarding the wind conditions throughout the region can be drawn from individual measurements. Owing to the complex topography of forested minor mountain ranges and its various impacts on near-ground air flows, reliable statements require differentiated wind measurements and site assessments.