Pongamia has attracted the world's attention as a sustainable substitute for petroleum products and its ability to grow and reclaim marginal lands. 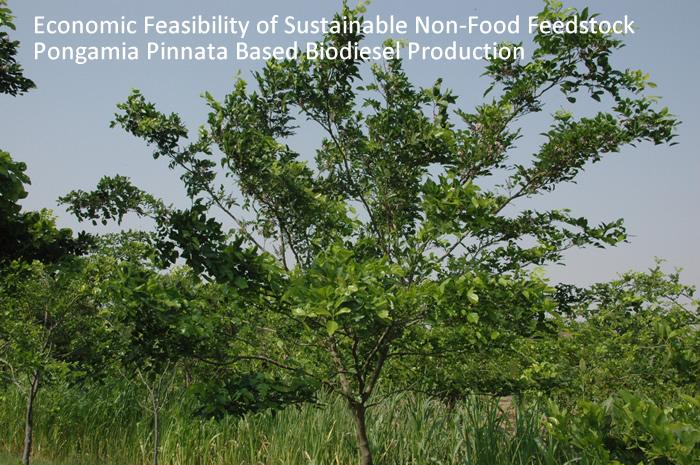 CJP sees the future position of biofuels within the broader scope of the global transformation of the energy system from fossil-‐based to renewable energy-‐based sources. A main threat for an accelerated transformation is the struggle for better fuel security. A second threat is of a global warming up to 6 ° C in this century as it is predicted by IEA officials on the basis of the “business as usual” development.

Calculations the CO2 emissions from fossil fuels need to be reduced by 50% until 2035 to keep on track towards the “under 2°C temperature rise” target.

Believing in Biodiesel– the Centre for Jatropha Promotion & Biodiesel (CJP) is working towards scientific commercialization of nonfood biodiesel trees/crops that will lend credibility; reliability and scalability with regards to food security, energy security and sustainable development and carbon savings.

With an effort to ‘grow beyond oil , CJP has identified, developed and cultivated as many as 17 non-food oil crops. With years of continuing research, experiments and trials has provided an adage to find and develop 2nd generation biodiesel feedstock with low cost input technology. The CJP intensified its collaborative research approach with regards to perennial oil seeds bearing tree like Pongamia Pinnata, Moringa oliferia, Jojoba, simarouba, Mahua , Calophyllum etc. in combination with annual nonfood oil crops like castor, flax, safflower, camelina, colocynthis etc to have more oil yield per ha and to improve its product. The CJP’s mission is to perform cutting-edge plant science research in genetics, breeding and horticulture, and further develop technologies to allow for the economic commercialization and sustainability of energy farms globally.

With a fully integrated platform featuring a world-class leadership and science team, the most advanced multifeedstocks research into all aspects of nonfood energy farming crop improvement program in the industry and addressing the complete value chain, CJP is bringing the opportunities of nonfood oil to reality.

We are an agricultural biotechnology, research and development entity developing and producing seeds of hope to produce renewable biodiesel feedstocks that can enable the large-scale replacement of petroleum and other fossil fuels. We use a combination of advanced plant breeding and biotechnology to develop new crops, known as dedicated energy crops, that we believe address the limitations of first-generation biodiesel feedstocks, such as corn and sugarcane, increase seeds and oil productivity, reduce crop inputs and improve cultivation on marginal land.

We need to find a balance between food security, biodiesel energy, and environmental sustainability. Biofuels represent the best and most realistic partial alternative to oil as transport fuel; a new paradigm is required to take full account of its complexity given the technical, economic, social, and political ramifications, particularly for agriculture. Biodiesel for energy in all its forms, particularly biofuels, is intrinsically linked to a modern and dynamic agricultural sector. Food security and Biodiesel for energy can be complementary rather than exclusive.

Pongamia: a Promising Candidate for a Successful Biodiesel Industry

Pongamia, a versatile oleaginous tree has many attributes and multiple applications. Pongamia has attracted the world’s attention as a sustainable substitute for petroleum products and its ability to grow and reclaim marginal lands.

Pongamia as a source of biodiesel

As Pongamia has high oil content (+36%) and can grow on malnourished soils with low levels of nitrogen and high levels of salt, it is fast becoming the focus of a number of biodiesel research programs. Some of the advantages of Pongamia are:

A higher recovery and quality of oil than other crops, no direct competition with food crops as it is a non-edible source of fuel,

And no direct competition with existing farmland as it can be grown on degraded and marginal land. As a legume it is also able to fix its own nitrogen from the soil, minimizing the need for added fertilizers. Whilst there are marked advantages in the use of Pongamia for biodiesel, many considerations are needed in addressing the world’s complex energy situation.

Pongamia oil has been taken directly from the atmosphere as the tree grows—on average, one hectare (2.47 acres) of Pongamia absorbs 30 tons of carbon per year. Thus burning Pongamia oil instead of fossil fuels has the overall effect of reducing carbon dioxide emissions by about 75 percent and carbon monoxide emissions by almost 50 percent. CJP’s research team identified and collected 42 high yielding candidate plus trees of Pongamia pinnata (L.)  and evaluated genetic association and variability in seed and growth characters to develop improved Pongamia varieties. In 2009, we got first break through in developing elite Pongamia variety. Scientific findings and process on pongamia identified promising accessions with favourable traits for future establishment of orchards.

Researchers at the CJP are currently researching the Genomic and Genetic of Pongamia, which will enable highly productive plantations of Pongamia to be grown. We are also seeing very good field trial data for our new variety with traits like better uniformity, improved self-branching, early flowering and higher productivity. CJP’s elite Pongamia variety “Derris Indica(DI03SAP™)” will yield at Maturity as high as 1000 gallon oil per ha which shall reached as high as 3400 gallon in 15th year  with proper nutrition, and irrigation.  This is truly an exceptional amount of oil from an agricultural crop.

Many studies have shown there is enough land available to produce more food, more feed and more biofuels. Though the discussion of indirect land use change (ILUC) caused by biofuels is not scientifically supported, the Pongamia does not causes land use change. Contrary to it Pongamia is targeted for marginal lands which are unproductive, often because of salinity and for water logging. It is claimed to be highly salt tolerant and as such is used for reforestation in the dry, saline wasteland

Biodiesel can make a large contribution to the world’s future energy requirements; this is a resource we cannot ignore. The challenge is to harness it on an environmentally and economically manner and without compromising food security.

By using non-food Pongamia tree for biodiesel production and then utilizing the waste for further oil extraction. Using current proven sate of art agronomy, enhanced cultivator and technologies developed by CJP, the biodiesel from Pongamia would be economically viable. The Pongamia Biodiesel can be produced less than US$ 49 per barrel, see detailed economics

Pongamia has attracted attention as pressure mounts to find sustainable alternative fuels to help meet countries' renewable energy targets and cut greenhouse gas emissions, without interfering with agricultural production. The medium-sized evergreen pongamia can grow on marginal arid or semi-arid land and is a nitrogen-fixing tree, which means that it helps fertilize the soil. "The tree and oil composition look basically promising. Researchers at India's CJP  has honor to establish this untapped resource as alternative source for Bio- Diesel industry of future as pongamia is a strong candidate to contribute significant amounts of biofuel feedstock.

BBA’S Next 7th 5‐day Global Jatropha Hi‐tech Integrated Nonfood Biodiesel Farming & Technology Training Programme in India from September 24-28, 2014 is all set to introduce you the real world of nonfood biodiesel where the attendees shall also have the opportunity to interact with Pongamia Pinnata which offers a possible solution for sustainable biofuel production: Agronomy, Horticulture, Biology, Engineering, Marketing and Financial aspects of Pongamia commercialization and its cultivation technology etc. as have also been included in the course.