Biomass is one of the focal constituents in reducing the green house gas effect with the aim of attaining self-sustainable energy production. It accounts for 27% of the India’s primary energy supply and specifically for power, it is less than 2%. The biomass includes agricultural residues, forest wastes, animal wastes, agro-industrial wastes, wood logs, degradable municipal wastes, weeds and energy plantation crops, etc., These biomass can be used in various conversion technologies to produce useful output. Though many numbers of biomass exist, the selection of proper biomass for the desired output is depending on the characteristics of the biomass, conversion technology, the stepwise changes that occurring during the reaction in the reaction chamber, behavior of the material and finally the quality of the output.

Biomass with moisture content above 30% would subject to the biochemical conversion technologies, such as fermentation and anaerobic digestion (McKendry, 2002). The biomass with lower moisture contents like dried wood logs from forest and energy plantation species, stalks from farms will be preferred for the thermo chemical conversion technologies such as pyrolysis, gasification, combustion and hydro-liquefaction.  The operational conditions and products from each process are presented in Table 1.

The combustion and gasification process produces heat and producer gas, respectively but that have drawbacks related to fuel storage, transportation and handling (Asadullah et al., 2008). The pyrolysis is an ancient technology investigated over the last three decades (Klass 1998). It mainly carried out in the absence of oxygen. It can produce solid char, biooil and producer gas. The solid char and liquid biooil can be transported and stored for future use. The pyrolysis can be classified as slow (conventional) and fast pyrolysis. Conventional pyrolysis would be carried at low temperature with long residence times and mainly produces charcoal (Duman et al., 2011) and the short residence times, faster heating rates and moderate temperatures favor the liquid product - biooil (Diebold and Bridgwater, 1997), which is called as fast pyrolysis. As for the fast pyrolysis, proper instrumentation and control system are the important requirements to attain the maximum measure of biooil. Hence, the slow pyrolysis has been recognized as an easier technology while comparing with the fast pyrolysis in terms of yield, investment, operation, repair and maintenance charges, etc., In addition, it can be established as a decentralized component in each farm depending on the availability of material and expected output.

Our country has a land area of 394.6 million acres out of which the 215.6 million acres is under cultivation practices and agriculture is backbone of our country. The economical contribution of agriculture to the country in late 1970’s was 43%, where our people mainly depend on agriculture and allied services. Now, it was reduced to 16%, because of many causes and reasons such as industrialization, inconsistent government policies and subsidies, poor irrigation practices, weak marketing facilities, cultural growth, poor agricultural income due to the varying monsoon and disease to the crops, improper guidance to choose the correct species, absence of alternative income opportunities and foreign investment in the retail sector. All these factors snapped the farmers to sell their lands and switch over to an alternate opening (World Bank: "India Country Overview 2008).

The simple approach is to amplify the profits to the farmers from an acre is by planting assured tree species such as Melia dubia, Eucalyptus, willow-G48 (Punjab, Haryana, UP) and W22 (Himachal Pradesh, Pathankot, Jammu), Miscanthus, Pennisetum purpureum (Napier grass), Panicum virgatum (Switchgrass), Phalaris arundinacea (Reed canary grass), Cynara cardunculus, Jatropha, Marjestica, Beema Bamboo, Casuarina junghuhniana, Casuarina equestifolia, Leucaena leucocephala (Subapul), Prosopis juliflora that return with a substantial price in the market, guaranteed payback, require low maintenance charges and save the atmosphere. Many number of biomass based power plants are existed in our country and they are affected mainly by the non-availability of feedstock. This can be solved by establishing energy plantations by announcing minimum support price to the growers and entering into the buyback agreements to infuse confidence. The energy crops can be utilized in all conversion technologies presented in Table 1. The choice of species is normally governed by the availability, reaction duration, obtainable maximum temperature and the ash content. In the present study Melia dubia was selected for the pyrolysis study mainly due to the fast growing nature and its availability.

Bridgwater et al., (2001) reported that in slow pyrolysis, biomass is heated to temperatures lower than 450°C and the vapor residence time varies from 5 min to several hours. Vapors do not escape rapidly, it continues to react with each other, and so solid char and some liquid products would be formed. Demirbas (2004) studied the effect of initial moisture content and temperature on the oil yields from slow pyrolysis of spruce wood, hazelnut shell and wheat straw in the test temperature range of 302 to 427°C with the feed moisture content of 6.5, 6 and 7%, respectively. The oil yield from spruce wood, hazelnut shell and wheat straw was in the range of 33.7, 30.8 and 27.4%, respectively at 427°C.  Shen et al., (2003) studied the pyrolysis of urban sewage sludge at a heating rate of 7°C min-1. Gonzalez et al., (2005) studied the slow pyrolysis of almond shell residues under nitrogen in a laboratory scale fixed bed reactor. The influence of temperature (300-800°C) and heating rate (5-20°C min-1) were tested. The yield was in the range of 21.5-47.3% for char, 31-51.5% for oil and 11.4-47.5% for gas. These three product fractions exhibited maximum heating values of 29 MJ kg-1, 14.1 MJ kg-1 and 15.5 MJ Nm-3, respectively.

Melia dubia is one of the fastest growing energy crop mostly found in India especially in hills at an elevations ranging from 600 to 1800 m such as Sikkim, Himalayas, North Bengal, Upper Assam, Khasi Hills, hills of Orissa and west guard mountains of TamilNadu. The tree can grow well in moist regions with a mean annual rainfall exceeding 1000 mm and can grow in variety of soils especially, sandy loam soils. It is a drought tolerant with a short gestation period of 2 to 3 years. It has the ability to provide high yields of biomass and can be harvested multiple times each year.

Melia dubia was used as the feedstock, which was received from the Forest College and Research Institute, Mettupalayam, TamilNadu. The wood logs were cut down into small pieces of 5 cm length and dried in a solar tunnel drier to a moisture content of less than 10%. The dried biomass was pulverized to particles of size less than 2 mm. Properties of the feedstock was determined as follows: Density was calculated as the weight of sample occupied in a known volume (Bala 1997). The moisture content (ASTM D 3173-87), volatile matter (ASTM-E 872), ash content (ASTM-E 830) and the fixed carbon was found out from the weight difference. The calorific value was tested using bomb calorimeter.

The feedstock of size less than 0.5 mm was taken in the bench scale reactor of 50 mm height and 60 mm diameter. The reactor was kept inside the muffle furnace. The muffle furnace had an analog type control system for the temperature. The reactor was heated to the pyrolytic temperature of 400°C at the rate of 15°C min-1. The vapors were generated from the reactor after the pyrolytic temperature of 120°C, mainly due to the removal of moisture. After which, the vapor generation was vigorous and the vapors were passed through a condenser, to convert the vapors into liquid product. After completion of the process, the system was kept remain until the arrival of room temperature. The residues remain in the reactor - char was weighed.

4.3 Characteristics of biooil and char

The biooil and char were weighed and their characteristics were analyzed as reported earlier. pH was tested in a Elico LI 613 make pH meter. The scanning electron microscope was used to determine the pores of the char. The magnification range used was 2400x with a spatial resolution of 50 nm.

5.1 Characteristics and Products from Melia dubia

The characteristics of Melia dubia is presented in Table 2. The yield of biooil and char were obtained as 10.47% and 27.4%, respectively. From this, it is inferred that the species is well suited for the char production compared to the biooil yield.

5.2 Characteristics of biooil and char

The biooil had a density and pH of 1.300 and 2.70, respectively. The calorific value of the biooil was 5790 kcal per kg-1 and ash content of the biooil was found to be 0.5%. The   characteristics of char such as fixed carbon and carbon are presented in Table 3. The lower volatile nature and increased carbon content in the char may be an alternate fuel for the heat purpose. Another important property, Iodine value is the fundamental parameter used to characterize the performance of carbons for the liquid phase application. The typical iodine number for the higher degree of activation for water treatment application is 500-1200 mg per g of sample. The higher number indicates the higher degree of activation. The powdered carbon from the present study had an iodine value of 374 mg per g of sample. Further activation of this carbon to activated carbon might increase the iodine value, which will suit for the liquid phase application. The SEM image of the char is presented in Fig. 1. The SEM image indicates that increase in the pore size would favor the nutrient, water and gas movement inside the particles. As reported by Nicholas et al., (2013) the pore spaces are important because of their influence on water saturation, permeability and adsorption effects. Hence, the char made from Melia dubia would be an effective media to aid the better growth and increase the yield of crops. 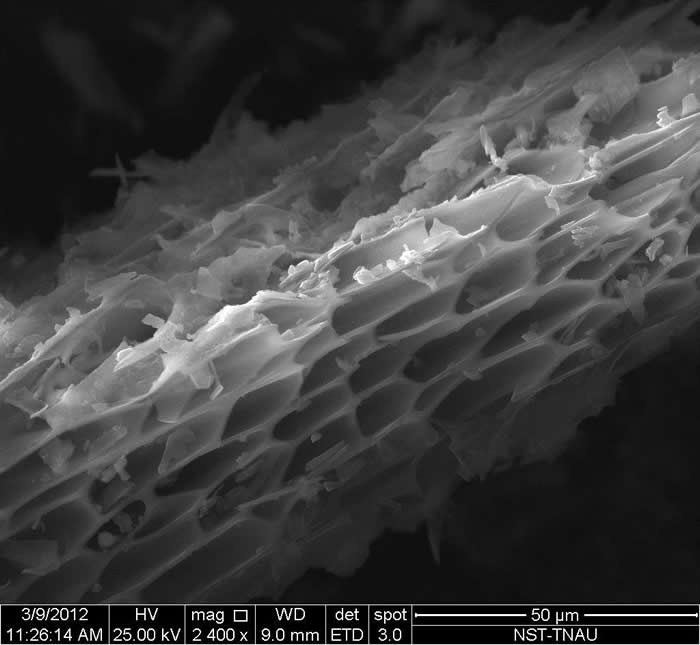