A little understood but perhaps far more important consideration for consumer safety could be related to the risk of battery fires to drivers.

Tesla, America’s electric car manufacturer, recently moved to open its patents for use to other auto industry players. This was an innovative way to accelerate the adoption of electric cars. UAutoInsurance analyzed 249 patents and found that 25 of the 100 battery-related patents were ideas for reducing the risk of fire. 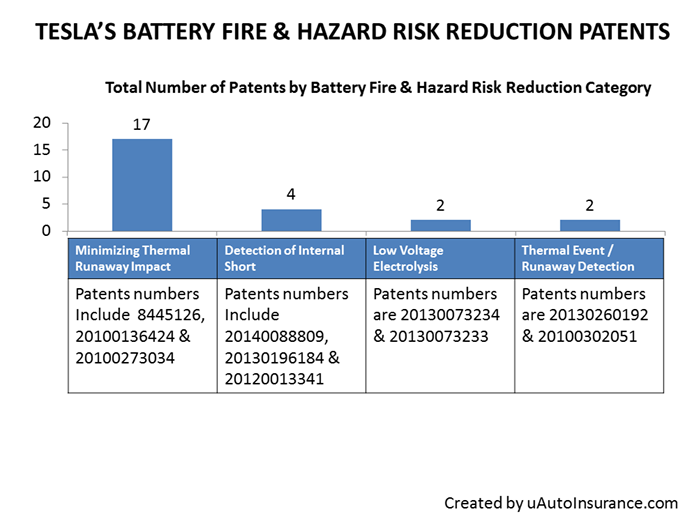 Battery-related patents are to be expected since Tesla’s innovations in the electric car segment are related to its extended use of batteries and to deliver better battery performance with minimal charge. However, a little understood but perhaps far more important consideration for consumer safety could be related to the risk of battery fires to drivers. Although electric cars are considered to be safer than gasoline cars, any battery-related fires immediately make news. Here is an example of a lead story from the New York Times on Oct 2, 2013:

A Tesla Model S electric car caught fire on Tuesday morning in Washington State, and the company said that the fire began in the car’s battery pack after the driver hit debris on a highway. Tesla’s driver told the police that he had hit metal debris on the freeway and exited, and then, he said, the vehicle caught fire. The widely publicized episode may have affected Tesla stock, which dropped 6.24 percent in Nasdaq trading on Wednesday. It fell a further 4 percent on Thursday.

With battery fires being extensively covered by the media, and the subsequent impact this has on the stock prices of their makers, other car manufacturers will be doubly concerned about the risk of battery fires. Accessing Tesla’s patents related to battery fires can help other auto makers reduce these risks.

In addition to safety, there is a real world cost of insurance based on the safety ratings of these cars. Cars that are considered to be safer have lower insurance costs. For example, the Insurance Institute for Highway Safety regularly monitors the safety levels of various cars, which are then used by insurance companies in their models to adjust insurance levels. Lower insurance costs for electric cars lead to lower cost of ownership, and ultimately to a cleaner planet.