A reflective surface reduces smog by reflecting heat back into the atmosphere. Not only is the smog reduced, but more importantly, energy costs are lowered in big cities. 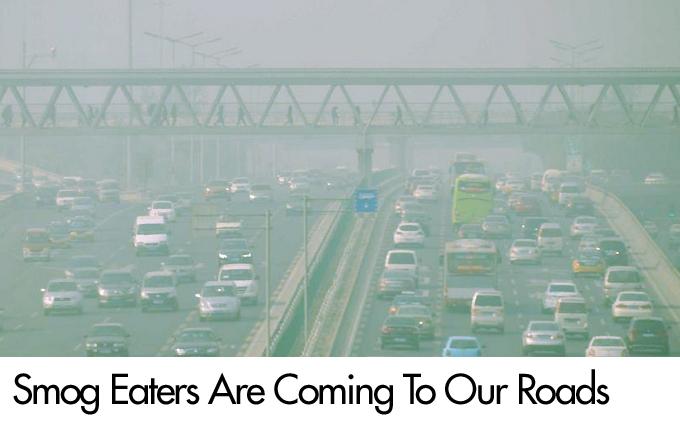 Smog refers to atmospheric instability, poor visibility, and large concentrations of gaseous and particulate air pollutants. The word "smog" is an amalgam of the words "smoke" and "fog." Actually, there are two kinds of smog. The first is characterized by sulfur dioxide and particulates; and the second is photochemical smog characterized by ozone and other oxidants.

Smog first became severe in the nineteenth century, when it was first observed to damage human health, buildings, and vegetation. It was due to the burning of coal when European cities were covered by soot. Higher-risk people with chronic respiratory or heart diseases were associated with prolonged episodes of calm atmospheric conditions, which prevented the dispersion of emitted gases and particulates.

Recently, clean-air policies around the world have resulted in considerable improvement of air quality in cities, so that serious smog no longer takes place there. Once the severe effects of smog on people, buildings, vegetation, and other resources became recognized, actions were developed and implemented to lessen the situation.

Several ideas were developed to counter smog. In California, researchers have engineered a reflective coating that, when applied to blacktop, can lower the surface temperature of a city street or a parking lot by 40 degrees Fahrenheit on a hot summer day. A dark pavement absorbs almost all of the sun’s energy, heating the pavement surface which warms the local air, contributing to smog. A reflective surface reduces smog by reflecting heat back into the atmosphere. Not only is the smog reduced, but more importantly, energy costs are lowered in big cities.

This cool pavement is related to white roofs, which when painted with a white reflective paint, curbs smog and climate change. Not only is smog reduced, but the inside temperatures of a building are brought down. A roof coated with solar reflective white paint reflects up to 90 percent of sunlight as opposed to the 20 percent reflected by a traditional black roof.

Now, we have smog eating concrete. The concrete, named “photocatalytic,” is made with regular cement sprayed with a chemical—titanium dioxide (TiO2)—that neutralizes air pollutants.

A two-mile stretch of Cermak Road and Blue Island Avenue in Chicago is being called "the greenest street in America." An Italian company, Italcementi’s “smog-eating” cement was used to make interlocking photocatalytic pavers that were laid in the cycle and pedestrian area, rest areas and car parks, ensuring cleaner, more breathable air.

This cement is covered with the tiny titanium dioxide particles that can remove nitrogen oxide gases from the air above it. It also works as a permeable filter when it rains; taking some of the pressure off of Chicago's stressed sewer system.

Besides having the smog-eating pavement, the streetlights run on solar and wind power, the sidewalks are made with recycled concrete, and shrub-filled "bioswales" keep storm water out of overtaxed sewers.

Depollution is the removal of contaminants and impurities from the environment. This is achieved with a photocatalyst, which accelerates the chemical reaction whereby strong sunlight or ultraviolet light de-composes organic materials in a slow, natural process. Used in concrete, it decomposes organic materials, biological materials and airborne pollutants. Dirt, soot, mold, bacteria and chemicals that cause odors are among many substances that are decomposed by photocatalytic concrete; thereby breaking down these compounds, minimizing the impact on the environment.

Titanium dioxide is a white pigment that is the main catalytic ingredient, which is added to cement during the manufacturing process. When activated by the sun's energy, the pigment creates a charge that disperses on the surface of the photocatalyst, and reacts with external substances to decompose organic compounds. Photocatalytic concrete has other environmental benefits, such as reflecting much of the sun's heat, which keeps the area cooler and reduces smog.

Another use is in urban areas, which are filled with concrete buildings that have a higher ambient temperature than their surroundings due not only to the heat absorption of concrete but also to the heat generated by air conditioners and motor vehicles. When buildings are coated with photocatalysts and wetted to create the thin film of water, the evaporation of the water pulls heat off the buildings and effectively cools them down. The photocatalyst breaks down organic pollutants into water and nitrogen, leaving the building clean. In addition, in still conditions, the catalyst is able to break down emissions as far as eight feet away from it.

Photocatalytic oxidation is useful for the reduction or elimination of polluted compounds in air such as NOx, cigarette smoke, along with volatile compounds that come from various construction materials. Also, high photocatalytic reactivity can be applied to protect lamp-houses and walls in tunneling, as well as to prevent white tents from becoming sooty and dark. Atmospheric components such as chlorofluorocarbons (CFCs) and CFC substitutes, greenhouse gases, and nitrogenous and sulfurous compounds undergo photochemical reactions either directly or indirectly in the presence of sunlight. These pollutants can then eventually be removed.

In addition, Titanium Dioxide has many applications and benefits. It destroys micro and macro organisms, neutralizes odors, decomposes VOCs and bioaerosals, oxidizes organics to CO2 and H2O, is environmentally friendly (Has no generation of secondary pollutants), has a long service life, and has low maintenance requirements.

On a global scale, Titanium Dioxide accounts for approximately 70 percent of the pigment used commercially worldwide.  Therefore there is apprehension over its toxicity in the workplace. The International Agency for Research on Cancer (IARC) classified this substance as a potential carcinogen.

A photocatalytic surface coating would be 0.394 inches thick — a combination of ultrafine titanium dioxide, cement, water, and aggregate filler. This combination was tested under several road conditions. One was a silt clay type soil that was uniformly applied to a sample surface. Then, commercially available motor oil (10W-30) was applied to another surface. Finally a de-icing salt was applied to a third surface.

If photocatalytic concrete is so great why aren't we paving all of our heavily trafficked highways? Well, like most public work projects, it all comes down to cost. Titanium dioxide pavement is simply more expensive than the existing concrete. If the price can be brought down, the air cleaning pavement could be the highway of the future.