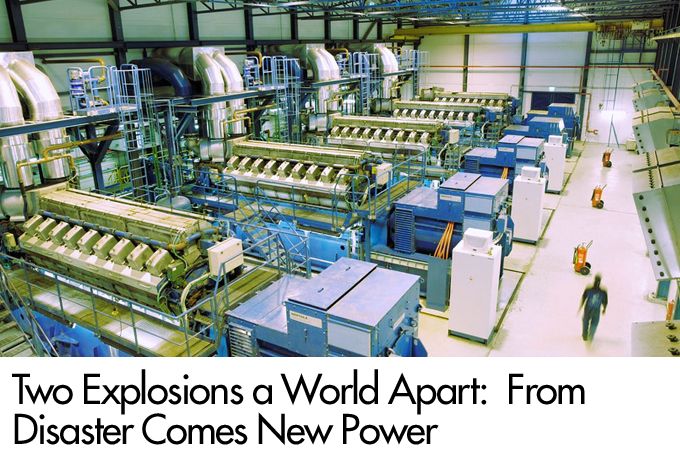 On March 11, 2011, a magnitude 9.0 undersea earthquake off the coast of Japan created a tsunami of 40-meter high waves that swept over the island, causing mass destruction and over 15,000 deaths.  One of the most devastating results of this event was the nuclear meltdown at the Fukushima nuclear power plant, resulting in evacuation of almost 500,000 people.

Just four months later, another power plant accident made headlines—this one a conventional power plant in Cyprus.  In this case, the Vassilikou power plant was caught in an explosion at a nearby naval base, where a brush fire swept into the arms depot and ignited a supply of gun powder.

Both island nations suffered disasters that knocked out a significant amount of their power.  But they emerged from their disasters in completely different ways.  And when entrepreneur and financier Roys Poyiadjis, a Cypriot who lives in New York, tried to break into the Cyprus energy market, he eventually ended up with a good investment—but not the one he expected.

Shortly after the explosion in Cyprus knocked out half the country’s electricity, Poyiadjis had an idea:  He could help his native country by building a power plant, which would also be a great business investment for his family office.  He quickly created a new energy company—Cyprus Independent Power—and hired a former Cyprus Minister of Energy to be the CEO.  Next, Poyiadjis contracted Wartsila, a Finnish power solutions company, to analyze the situation and oversee the plant’s engineering, procurement, and construction operations.

Wartsila located a barely used power plant for sale in Japan which was owned by Toshiba.  Poyiadjis hired Vincent Dunlevy, an upstate New Yorker with extensive experience in the power generation business, to negotiate the purchase from Toshiba.  The plan was to purchase the power plant, decommission it, and deploy it onto a power barge for operations in Cyprus.

By September 2012, the operation was off to a great start—Dunlevy completed the purchase, and engineering, and design for relocating and deploying the plant in Cyprus.  But Cyprus’s financial situation was deteriorating quickly due to the Greek bank crisis. The exposure of Cypriot banks to overleveraged local property companies, the Greek financial crisis, and a downgrading of the Cypriot government’s bond credit rating created financial instability for the nation.

“We decided that it wasn’t the right time to enter the power market in Cyprus,” said Poyiadjis.  “That was disappointing, as we were looking forward to forming the first independent power producer in Cyprus.  But in the meantime, we owned a power plant and had an entire engineering team in Japan.”

After some consideration, Poyiadjis decided that the project would go ahead, but in an entirely different part of the world.

Around the same time that Cyprus was struggling with a weak economy, Japan was dealing with an entirely different kind of crisis: Finding a safer source of energy.  After the Fukushima disaster, the country made the decision to move away from nuclear power.

Because Japan imports their fossil fuels, a more economical—and environmental—solution was to incentivize renewable energy sources.  After the meltdown, the Japanese Ministry of Economy, Trade, and Industry (METI) devised a plan to offer a generous feed-in tariff for energy generated by renewable sources. The tariff guarantees financial incentives to companies generating power using renewable energy sources.

Poyiadjis and Dunlevy decided to revamp the project and form a company called ICC Energy Limited to pursue this opportunity in Japan.  They chose the Kashima port in the Ibaraki district, 71 miles (115 km) from Tokyo for the building site to allow easy access from the water and reduce the cost of trucking fuel.  The first step was to gain a license from METI, for the 40 MW Toshiba power plant that the Poyiadjis family office recently purchased -- a level of power that made them the largest biofuel plant in the country.  With the feed-in tariff, the plant’s 20-year power purchase agreement is valued at $1.5 billion US dollars.

But moving the project to Japan wasn’t the only game-changer for ICC.  The move also meant that they’d be switching from a conventional fuel (they’d planned to use heavy fuel oil in Cyprus) to a rather unconventional source: palm oil stearin, a non-edible byproduct created from processing palm oil, which is mostly produced from the oil palms in Malaysia and Indonesia.  Palm oil stearin provides a renewable energy source with low carbon dioxide emissions.

In 2013, Poyiadjis’s friend and clean tech investment banker Jesse Pichel introduced him to Martua Sitorus, the co-founder of Wilmar International, which is the largest palm oil producer in the world.

Poyiadjis traveled to London to meet with Martua Sitorus and explained ICC’s business model and strategy, and in order to get the project off the ground, it was paramount to have a consistent supply of palm oil.

“It was crucial for us to build a partnership with someone who could supply both capital and palm oil, and could take an entrepreneurial approach to the opportunity,” said Harris Stasis, a director of ICC Energy.

Sitorus was impressed with the plan: In early 2014—a few months after his meeting with Poyiadjis—the Sitorus family office made an investment in ICC Energy, and Wilmar International agreed to provide the necessary fuel.

“I believe Martua saw this biofuel power plant as a great investment opportunity in Japan and a platform for expansion,” said Poyiadjis.  “This particular plant has the ability to expand by another 100 MW, which would potentially make it the largest biofuel plant in the world.  We already have the land, and we’re grandfathered into the high tariff rate.”

The Cyprus explosion created the original idea, but Poyiadjis’s plan didn’t end up the way he expected.  It may have turned out even better, and when the power plant goes live in fall of 2016, Poyiadjis’ plan will also benefit the Japanese people -- and the environment.

“In terms of impact, the plant will provide 50,000 households with green energy,” said Poyiadjis.