Developing and engendering clean and renewable sources of energy is one of the paramount challenges of our civilization. The most promising denominator elucidating these challenges is a 160-year-old invention known as the Fuel Cell. By the direct conversion of chemical energy to electrical energy, the mechanism of fuel cells holds a potential to revolutionize distributed power generation, transportation, and electronic devices of all types. Already, fuel cells boast a 30-year history of fuelling space missions. Attention has spurred once again to fuel cells as one of numerous potential technologies capable of supplying energy efficiency and CO2 savings while decreasing reliance on fossil fuels. They also now run small numbers of automobiles, demonstration buses, and stationary power units. But before fuel cells can compete economically with existing electrical generation technology or batteries, drastic enhancements must be made in performance and cost. Last decade was characterised by swelling concerns over the crises of energy security, power deficit, and carbon dioxide (CO2) emissions on the part of governments and consumers. Following the same, there has been a rehabilitated focus on fundamental research to achieve revolutions in cost reduction and operational performance to make fuel cells competitive with conventional technology.

A fuel cell is like a battery that generates electricity from an electrochemical reaction. Both technologies convert chemical potential energy into electrical energy and also, as a by-product of this process, into heat energy. However, a battery keeps a closed storage of energy within it and once this is exhausted the battery must be replaced, or recharged by using an external supply of electricity to initiate the electrochemical reaction in the reverse direction. A fuel cell, on contrary, uses an external supply of chemical energy and can run indefinitely, up till it is supplied with a source of hydrogen and a source of oxygen. The source of hydrogen is generally referred to as the fuel, though there is no combustion involved. Oxidation of the hydrogen instead takes place electrochemically in a very competent way. During oxidation, hydrogen atoms react with oxygen atoms to form water; in the process electrons are released and flow through an external circuit as an electric current. 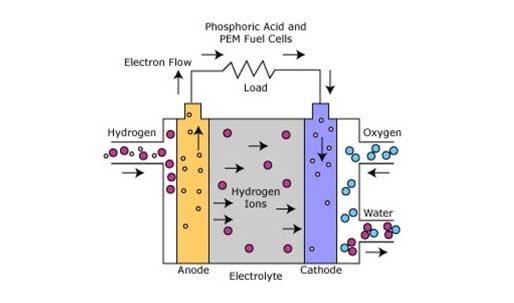 In the past, fuel cells were bulky and awfully expensive to manufacture, same as the first calculators and computers. But, alike these products, the cost of fuel cells is quickly coming down to consumer-affordable levels as a result of mass production. We are presently in a transition period now, where various fuel cell companies are investing heavily to gear up for bulk manufacturing and at the same time developing a diversity of markets for their product. While public feedback concerning fuel cells seems to be trending unenthusiastic, three technological forces have been quietly infecting in the background, fashioning a kind of impeccable hurricane that could thrust fuel cell technology from obscurity into pervasive agreement.

The first and possibly the most startling of these catch-22 is the plateauing of battery efficiencies. And because of the augmenting demand for a solution to the power storage impasse, many companies have chosen to look outside the battery box, and consequently, they have come to rest on fuel cells. Besides plateauing battery efficiencies, the second force stirring in favour of fuel cells is harsh pollution laws. The third industrial shift crafting a rising tide for fuel cells is the invention of unusual means for inexpensively creating their component fuels. While the exquisiteness of fuel cells has always been their working efficiencies and lack of emissions, they have one chief shortcoming – the gases that power them are costly to supply, and frequently require inputs from traditional power sources like natural gas. Hydrogen, the principle component used to power most fuel cells, is contained in water. But in order to detach it from oxygen in the process of electrolysis, more traditional energy sources are repeatedly used, thus cancelling out environmental and efficiency profits to be gained from a fuel cell. 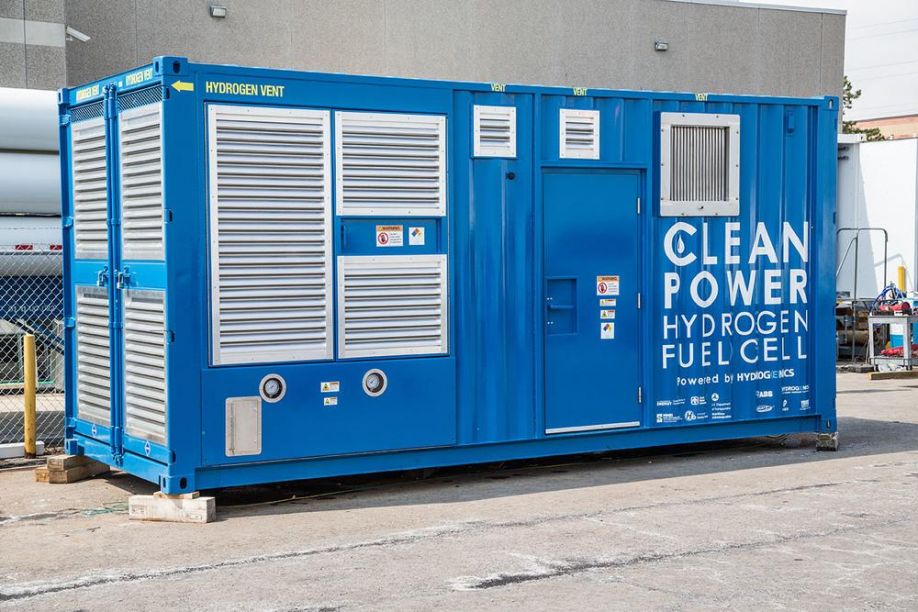 Consequently, the long-term goal of fuel cell research is to yield absolutely non-polluting power source. In order to accomplish this, the fuel cell must run on hydrogen generated by renewable means. The technology for the same does exist, but the infrastructure to succeed into this efficiently and cheaply is still entails improvement. PEMs and AFCs can use fuel reformers to convert hydrocarbons, such as gasoline and natural gas, into hydrogen, but this technology can lower the overall efficiency of the fuel cell by 1/4 and can release small amounts of pollutants. On-board fuel storage and conversion solutions are being developed, but they are still years from being perfected.

Artificial photosynthesis is one of the most capable approaches to the above stated predicament. In the process of Artificial photosynthesis, Hydrogen can be produced by the electrolysis of water. This process involves photo-electrochemically separation of water into individual elements H2 and O2 and stored with the utility of sunlight. When theses chemical elements are later united, electrical energy can be created. This process is housed in an electrolyser, which can be pronounced as a 'reverse' fuel cell, because an electrolyser make use of electrical current and water to produce hydrogen and oxygen, instead of mingling hydrogen and oxygen electrochemically to generate electricity.

The most recent invention by researchers was conducted at the University of Basel. They studied and tested how sunlight can be used for this purpose. This invention exemplifies a perfect illustration to the above stated process of Artificial photosynthesis. The scientific journal Chemical Communications published their latest upshots. A team of researchers led by chemists Catherine Housecroft and Edwin Constable from University of Basel are working in consortium with the Swiss Federal Laboratories for Materials Science and Technology (Empa) for practical and feasible implementation of this method.

The process of splitting water consists of two partial reactions, which are executed with the aid of different catalysts: water reduction (which produces H2) and water oxidation (which produces O2). The second process is comparatively more perplexing of the two reactions, which is why research lays so much effort into the progression of efficient and sustainable water oxidation catalysts.

"If you don't do this, it's like throwing all the different parts of a clock into a bag, giving it a shake and then hoping it will be possible to tell the time," explains Prof. Edwin Constable from the University of Basel.

An imperative factor in making photo-electrochemical fuel cells is the accurate arrangement of the individual components. To govern the perfect arrangement of the catalysts, the chemists team established a water oxidation model in their current study which, generates the same chemical transitional states as light. To achieve this, they implied compounds of the chemical element Ruthenium as a catalyst. Langmuir–Blodgett (LB) and drop-cast (DC) films were prepared from [Ru(1)3][PF6]2 and Co4POMonmica using the LB technique, that  have been evaluated as water oxidation catalysts and reporting their electro-catalytic performances. These films are tested for using them as a WOC in an electrochemical water splitting cell. They compared the electro-catalytic performance of LB layers with layer-by-layer drop-cast (DC) films of the same composition.

The acute feature here is the self-assembly of the discrete components in a hierarchical structure. The researchers thus prospered in simulating fuel cells powered by light radiation. This model allowed them to test the position and efficiency of the individual components.

Another great example is from researchers at Rice University in Houston, Texas. They successfully devised a relatively simpler and cheaper way to separate hydrogen from oxygen using sunlight. At the core of their innovation, there is a three-layered material composed of aluminium, nickel oxide, and gold. Sun rays striking the material get converted into high energy “hot” electrons caused by the effect of gold nanoparticles. These “hot electrons” are impounded on the top most layer of the material and used to produce a photocurrent adequate for splitting water, and tapping off the resultant hydrogen gas. This hydrogen can be hence used to power fuel cells. 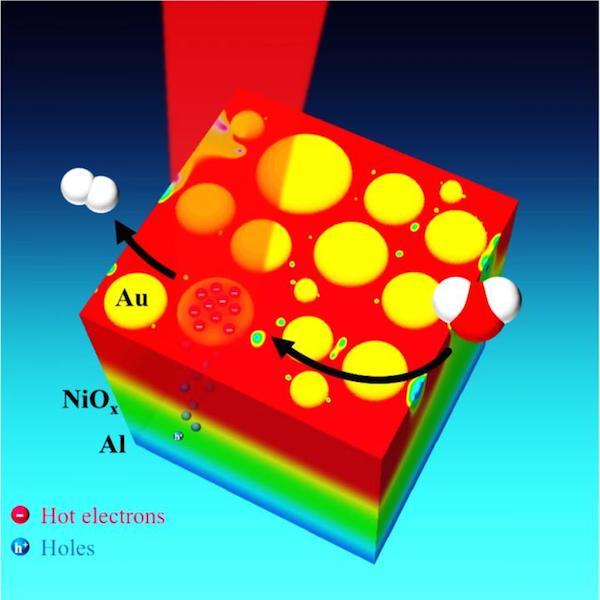 Electrolysers technologies exist and commercial and industrialized versions of several capacities are available in the market. Numerous renowned companies have called for these technologies to be used in amalgamation with renewable sources to produce hydrogen for fuel cells. If the above system proves commercially feasible and able to gauge up, it could be a game changer for fuel cells, boosting them from a niche industry into the world’s most utilitarian power source.