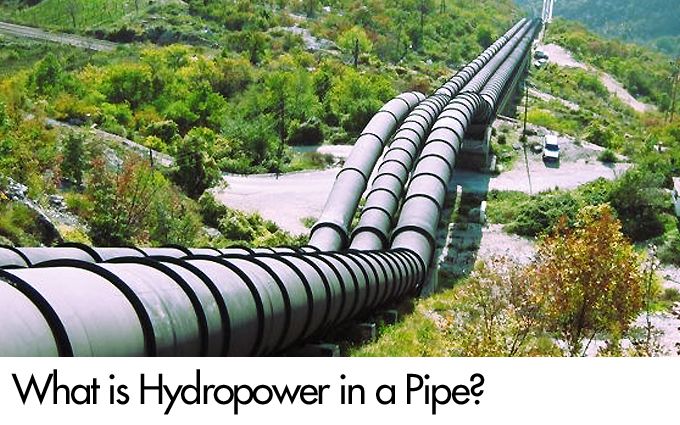 A water main carries water downhill from a nearby reservoir. But this is no ordinary water pipe. Within the pipe is a series of four turbines that spin within the 42-inch main pipe, generating power as the water flows. This is hydropower in a pipe.

The system works by taking advantage of gravity-driven water flow. The turbines’ aerodynamic blades utilize pressure from the moving water rather than impede the water the way a conventional hydropower turbine would.

Hydropower in a pipe is based on the science of a wind turbine. The best part is that this concept does not impact the environment as does a hydropower plant on damned rivers. Gravity-based water systems can meet 10 - 15% of an area's power needs at a low cost.

Drinking water and sewage systems account for between 3 - 4 % of the total U.S. energy consumption and absorb up to 40 % of municipal energy budgets, according to the EPA. LucidPipes, created by Portland based startup—Lucid Energy—helps address both of those challenges. They installed a $1.3 million system in Portland, Oregon, which produces enough renewable energy to power about 150 homes, and the resulting power revenues can help pay for needed infrastructure upgrades.

LucidPipe systems can be deployed 3 - 4 turbine diameters apart. Therefore, up to four LucidPipe units can be installed in a standard 40 foot section of pipe. One mile of 42” diameter pipeline could produce as much as 3 megawatts or more of electricity.

The amount of electricity generated is a function of the rate of flow and the pressure. In a standard 60" diameter pipeline, with flow velocity of seven feet per second and 40 psi of excess head pressure, a single LucidPipe unit could produce up to 100 kW of power. Adding multiple turbines in a pipeline with these characteristics has the potential to generate thousands of megawatt hours of renewable energy without environmental impact.

LucidPipe is designed not to effect water operations. It can be configured to efficiently generate electricity within a wide range of pipe diameters, head pressures and water velocities. The system arrives mounted inside a pipe section. The pipe section is installed directly into the water transmission pipeline in a day; and it is connected to the grid in a week. Its patented lift-based turbine design does not extract as much pressure as other technologies.  LucidPipe can be placed throughout a pipeline system in series without disrupting water delivery. When the water flow is low, LucidPipe can be deactivated, thereby having virtually no impact on pipeline efficiency.

The source of water must be gravity fed, not pumped. There must be extra pressure available, because the pressure after the turbines will be lower than it was before the turbines. Without the extra pressure in the water's movement, customers will experience a drop in water pressure, which is unacceptable.  All water customers should have a minimum of at least 20 PSI of pressure.

Anytime a device or piece of equipment is placed within a pipeline, the risk of cavitation exists. LucidPipe is designed to limit the possibility of cavitation over a wide range of conditions typically found within pipelines. LucidPipe is designed to automatically and remotely monitor for conditions that might allow for the onset of cavitation, such as extremely high flow velocity, and utilizes a control system that will apply either the electrical or mechanical braking capabilities to shut the system down until such conditions have subsided.

Another company exploiting hydropower in a pipe is Leviatan Energy Hydroelectric LLC.

The technology behind their in-pipe turbine is multifactorial. They have unique combinations of blades, nozzle and blade ratios, air compression, sensors, rpm, controls, and more that make a turbine adapt to this unique environment of limited space and variable flows. One of the most important parts is the use of an air bubble to prevent interference of the water with the blades. 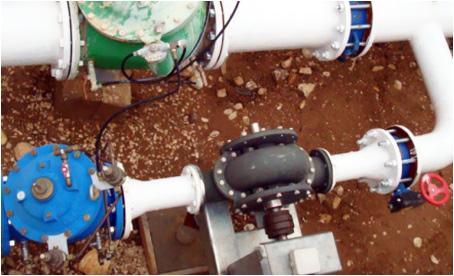 They use computational fluid dynamics modeling to design the right ratios for their turbines. They are also working to make their hydroelectric turbine smart, using software algorithmic control. The algorithms are CFD-based, used in conjunction with a control and software system to make a higher efficiency turbine that better regulates pressure and responds to variable flow rates while integrating into a larger grid.

Leviathan Energy's patented Benkatina turbine fills a niche in the market for small and medium distributed hydropower sources. The Benkatina presents an innovative, state of the art approach that will allow the global development of hydroelectric projects in situations that were previously not possible or considered uneconomical. 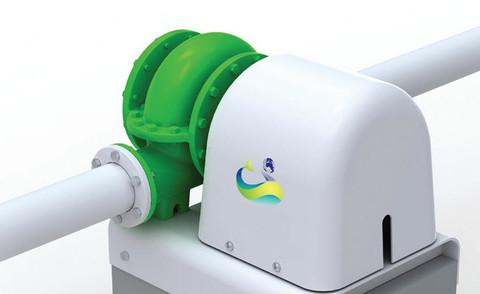 The Benkatina Turbine is designed to be integrated into any existing or planned pipe and other downhill flow systems including fresh water, waste water, open canals, Industrial output and rain gutters.

The Benkatina Turbine is built to tap into the potential of the sewage lines running through your neighborhood, your city's wastewater treatment plant and really any piped system with water running through it, including your toilet. Theoretically, you can put a Benkatina in there if you want. It's not going to generate much power, though, unless you flush your toilet constantly, all day, every day.

Because it's smaller, it can work in lower-flow situations. There are water pipes running underground for all sorts of purposes, like carrying wastewater away from factories and carrying clean water into your home. One or more of these turbines can be inserted into the piping to capture energy from this water.

Water pipelines that generate profits from the sale of electricity are helping municipal and industrial water managers meet budgets while ensuring the drinking water is clean and safe.

Posted by Jake coomber on 09/24/19, 07:52 PM
i had an idea like this back in 2012 i even have the original drawings on how i could domesticate this the cost on implicating this though is very high especially to the houses and office building in place today. however we should be investigating a way to harness zero point energy and taking this energy from the subatomic particles within the empty space around us however things like this are not discussed.