Our roadways are getting smarter every day because of new technologies, which generate solar energy, for improving the operation of autonomous cars, for lighting, and for monitoring the condition of the road.

The Future of Smart Highways

Is a highway smarter than a fifth grader? Maybe not, but our roadways are getting smarter every day because of new technologies, which generate solar energy, for improving the operation of autonomous cars, for lighting, and for monitoring the condition of the road.

Traditional solar cells are made from silicon. They are a flat-plate, and for the most part they are more efficient than the second-generation solar cells, which are called thin-film solar cells.

The world's first photovoltaic expressway was opened in Jinan, east China's Shandong province in December, 2017. The ring road has a section just a little over a mile long. This section has three layers. The bottom layer is an insulating layer to prevent moisture from getting to the photovoltaic devices in the middle layer, and the top layer is a protection layer built out of transparent concrete. The PV panels, which look like pieces of glass, can handle mid- size vans.

PV roads can release power to electric vehicles passing over them. They are also able to instantly melt a winter snow, covering the road. These roadways will be able to provide technical support to autonomous vehicles in the future.

This roadway can handle 10 times more pressure than normal asphalt; and in a year, it can generate 1 gigawatt of electricity, which will be used to power the street lights and a snow-melting system on the road. Should electric car re-charge stations be built in the future, the road is designed to supply power to the stations. This road is an experiment, and it might be awhile before it is expanded.

The downside is the cost, which is about $458 per square yard. An asphalt road costs only $5. This means that the price tag for the Chinese project is about $2.7 million. Since the project generates enough electricity for 93 homes, it will take 21 years for the project to pay for itself. As with all new technology, the initial cost is unusually high, but in time, the cost comes down should the project succeed; thereby, eventually leading to discoveries that will make solar roads practical.

In Oss, Netherland there is a road that has glow in the dark road markings using paint that contains photo-luminising powder that charges up during the day. These green glow markings will glow for eight hours at night. Good idea. Except nights last longer than eight hours. Then, what?

Ever drive down a dark road wishing it had lights? How about using motion-sensor lights on these not often used roads?  When a car approaches a particular stretch of a road that can use extra lighting besides a car’s headlights, the motion sensors will light up only that section of the road. The lights will become brighter as a vehicle approaches and will slowly dim to off as the vehicle passes. 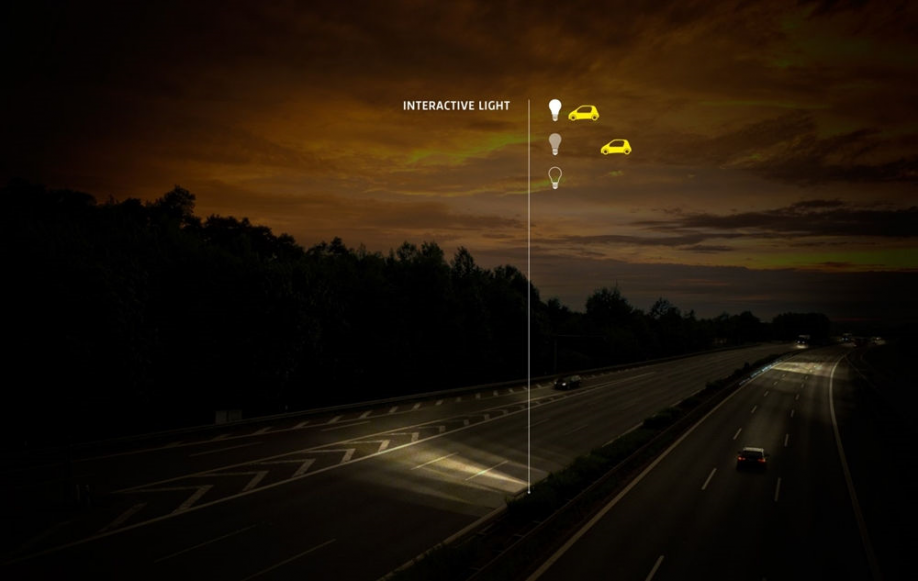 Interactive lights are perfect for roadways that are less-travelled; they save on energy consumption while making a road safer.

When weather forecasters predict snow or icy conditions, local governments deploy trucks that scatter salt, sand or other chemicals to inhibit ice build-up on roads. This does not last, as melting snow and vehicles driving by wash it off, requiring re-application.

Seda Kizilel and her colleagues at Koç University in Istanbul created a mixture—a sort of salt-infused asphalt—and discovered that their composite released de-icing salt for two months in a lab setting. They mixed a salt potassium formate with the polymer styrene-butadiene-styrene, a hard rubber, and added the mixture to bitumen, a primary component of asphalt. The mixture reduced black ice.

The composite material was as sturdy as unmodified bitumen, and it substantially put off ice formation in lab studies by releasing de-icing salt for two months in the lab;  but the effects could last even longer when used on real roads, as the salt-polymer composite would be evenly embedded throughout the asphalt. Thus, as vehicles drive over and wear away the pavement, the salt would continually be released — hypothetically for years.

Along with these road improvements, we will see an automated highway system. Such a system would have a lane or set of lanes where vehicles with special equipment could travel together under computer control. This system will utilize electronics, computers and the control technology developed for aviation, the space program, and defense to improve the highways.

The system will use magnetic sensors, which are imbedded along the highway lanes; while magnetometers located under the vehicles’ bumpers would detect the magnets and automatically keep the cars in the center of the lane. A network of small computers would be installed in the vehicles and along the sides of roadways to coordinate the flow of traffic.

Digital radio equipment in each vehicle would allow the on-board computer to communicate with other vehicles in the vicinity and with controlling computers, which monitor the roadway.

Using either radar or an infrared laser, forward-looking sensors would detect dangerous obstacles and other vehicles ahead. Video cameras will be linked to computers that process images rapidly to assist the forward-looking sensors. The cameras could also be used with or instead of magnets to track lane boundaries.

Visual Displays, mounted on the dashboard or projected onto the windshield, would give the driver information about the operation of the vehicle, similar to the heads-up displays in fighter jets.

Some of the smart highway technology is being used today; while others are still in the prototype phase. When all of the technology comes together, we can expect safer highways.