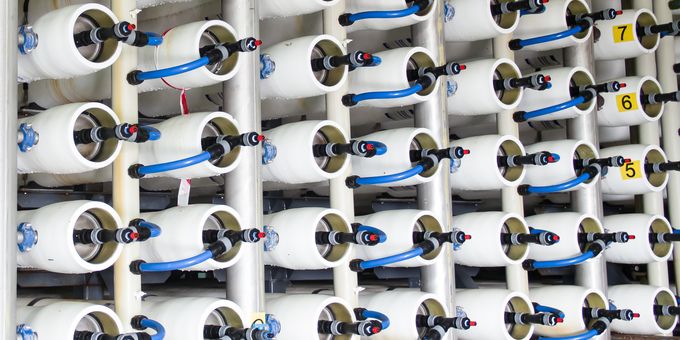 In a disaster situation, access to water needs to be a priority. Less than a week without water can be deadly. Events like hurricanes, tornadoes and wildfires can knock out power and access to the regular water system. Droughts are becoming more common as well, making water shortages a growing concern.

Water desalination is a practical way to provide water to people during natural catastrophes and other situations in which access to fresh water is limited. These desalination plants require power, though, and storms may take fossil fuel-fired electricity generation out of commission.

Desalination processes remove the salt from saltwater to make the water potable. In parts of the world where access to fresh water is limited, desalination is a primary source of drinking water. Cost has been a primary barrier to using desalination, but as technologies improve, the expenses are going down.

There are two major categories of desalination technologies:

There are around 18,500 desalination plants with a capacity of 22.9 billion gallons. The amount of membrane to thermal plants is approximately even. Tests have shown that reverse osmosis is the most efficient technology available today.

As both desalination and clean energy tech improve, innovators are looking to combinations of technologies.

Projects currently exist that combine solar photovoltaic technology with reverse osmosis. As battery technologies for solar systems become more prominent, the practicality of these setups will increase. Some have also proposed that desalination plants run by renewables could alternate between providing electricity and water, depending on what is most in demand.

One of the most notable concerns surrounding using clean energy to desalinate water is cost. As the costs of renewable energy come down, though, this solution has become feasible. A recent case study found it to be comparable in price to a fossil fuel-powered desalination plant.

The study, from the National Research Center in Egypt, determined that the cost of a conceptual reverse osmosis facility using photovoltaics to desalinate seawater would be $1.21 per cubic meter. Costs for a fossil fuel-powered plant range between $1.18 and 1.56 depending on fuel prices, the researchers said.

While such a plant would still require a substantial upfront investment, the costs are rapidly decreasing and are often on par with those of other solutions.

Desalination plants that run on clean energy could be key resources during natural disaster recovery. It's vital that people have access to clean drinking water following a catastrophic event.

These events, especially if they involve flooding, can contaminate water systems, including wells. Water desalination plants can make even heavily contaminated water safe for drinking, and having enough capacity for entire communities is feasible with even a single desalination unit.

Using renewable energy, such as solar and wind, means that you don’t need to rely on transporting fuels into a disaster area. For remote locations, distributed solar can provide the power to desalinate water even if disconnected from the main grid.

Clean-energy water desalination plants can serve as both long-term and emergency solutions. They are now more technologically and economically feasible than ever before, and continued advancements in these areas may make them even more attractive drinking water solutions in the coming years.