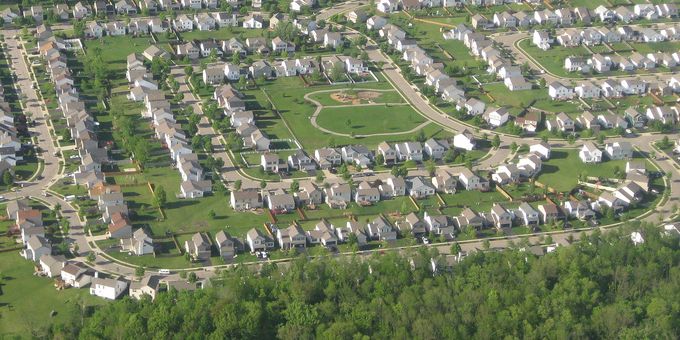 What is Energy Sprawl?

You see sprawl on the bus or train when another passenger tumbles over into your narrow seat. You see it with urban areas sprawling out for miles in every direction.

The energy sector is preparing to meet the demand for energy by increasing renewable energy production. But many renewable energy sources have a large energy sprawl, which can jeopardize biodiversity and conservation. Nuclear power, coal and geothermal energy does not take up much space. But wind power and corn ethanol does.

By 2040, energy produced in the U.S. is predicted to rise 27% to support both domestic and international demand. Meeting energy demands while curtailing damaging climate change is generally recognized, but there is another problem that requires consideration. This is the land use consequences of the rising energy demand. The imprint of energy development, called energy sprawl, will probably produce substantial habitat loss with an accompanying effect to biodiversity and ecosystem services. 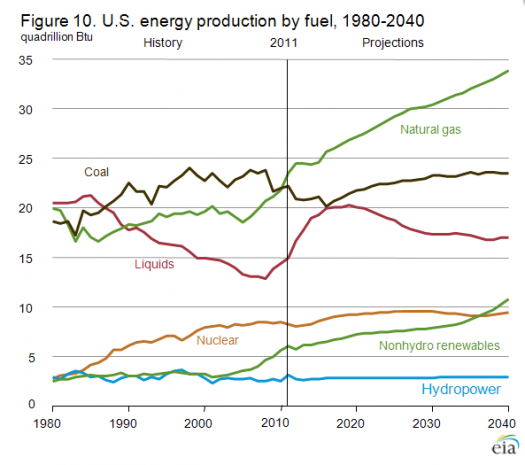 Unconventional gas production in the United States, such as hydraulic fracturing and directional drilling, is expected to double and will account for nearly 85% of all US natural gas production in 2040. Renewable energy can utilize the same land year after year, but extractive energy exhausts local land area. In order to maintain production, oil companies must constantly drill and mine new areas. Therefore, to produce that same amount of energy from fossil fuels as renewables, there must be continued land sprawl, which will exceed that needed for renewables.

Coal, oil, and natural gas presently have a medium-size footprint based on an energy to output per acre ratio. Actually, these extractive industries involve a vast and growing area because they dominate energy production, and because of the considerable amount of energy being consumed.

Fossil fuel exploitation in the West is a potential area for massive energy sprawl. Renewables, such as wind and solar power, can have a large physical footprint in comparison to the energy produced. They are a small part of the current energy mix in the U.S. Their aggregate energy sprawl is at present modest but growing.

Because wind turbines require minimum spacing distances to maximize wind energy capture, the physical footprint of wind power is extensive. Placing wind turbines in existing agricultural landscapes would not fragment any additional wildlife habitat, while situating solar arrays on rooftops, parking lots, and urban brownfields would not contribute to energy sprawl at all while generating substantial energy close to where it is needed, eliminating the sprawl triggered by new transmission lines.

Land used to grow feedstock for liquid biofuels, or grow biomass to generate electricity, presents the greatest potential energy sprawl of the major energy alternatives being proposed. The amount of energy produced from these fuels is low, yet the amount of land that must be effectively used is massive.

Energy sprawl can be avoided if the focus is on renewable sources and the introduction of distributed renewable energy systems based on photovoltaic panels on the roofs of buildings, micro wind turbines, and multiple micro-grids. This could be accomplished by introducing new rules simplifying the compliance process, proposing financial incentives and tax cuts. This would not lead to energy sprawl but to a new energy system distinguished by a multi-layered density, using a combination of technology, organization, and physical development.

Given the pressing need to alleviate climate change while also meeting the growing energy demand, the progress of renewables is good news, even if renewables have trade-offs. Hydropower alters water flows, while wind and solar have large land footprints. The expansion of land for energy production is currently the single largest cause of land-use change in the United States and around the world.

If we don’t plan carefully, the subsequent energy sprawl could impact up to 20% of the remaining physical lands in the world, affecting global biodiversity and potentially causing the loss of important ecosystems as well as causing conflicts over land use.

We need to develop renewables close to sites that are already converted, which include agricultural lands, industrial areas and former mine sites. Then, we need to use the existing infrastructure from fossil fuel installations to link the renewables to existing energy grids to avoid more sprawl. We can also mitigate sprawl by siting energy production as close as possible to the areas where it will be used, such as the very rooftops of the industries and houses where the energy will be utilized.

By examining land values—including biodiversity, ecosystem services and social values— the energy industry and regulators can identify locations where renewable energy can be advanced with minimal impact to the ecosystem and people.

By planning future energy needs on a regional and national scale, rather than a piecemeal approach, we can take advantage of the occasion to reduce the energy sprawl of renewables, while fast-tracking the transition to renewable energy. We need to evaluate the right energy mix and where to locate it, placing ourselves on a truly sustainable path to repowering the planet.

While wind, solar, and biofuels have a larger footprint on the land than fossil fuels, we can place them just about anywhere. Some places may be sunnier or windier than others, but renewables aren’t bound to a specific location as fossil fuels are, and we can pick and choose good places to locate renewables. There’s plenty of inferior land in the world that we can use to meet every country’s renewable energy goals by 2040 without clearing any more virgin land.

We can avoid energy sprawl with careful planning and we might accelerate the conversion to renewable energy, which means a more sustainable future for the world.