As the second largest wildlife refuge in the world, Zambia’s Kafue National Park stretches over 22,400 acres — an area comparable to the U.S. state of Massachusetts. Within its borders, a vast terrain of swamplands, grasslands and woodlands is home to more than 161 species of mammals. Unfortunately, as wildlife has thrived in this and other Zambian centers, poachers have also proliferated, part of a 100 billion dollar a year illegal business that has brought the population of the earth’s most fearsome predators to the brink of collapse.

The problem affects people as much as the endangered wildlife. More than one million tourists stream into Zambia’s national wildlife parks each year, lifting the local economy and funding conservation efforts that are critical to saving the lions, elephants, rhinos and other lesser-known endangered species that call Kafue, and other reserves, home.

To combat poaching, the World Wildlife Foundation formed a consortium of companies to develop a solution that would transmit real-time information to anti-poaching teams, and allow them to stop poachers before they act.

Working with selected technology partners, WWF developed an electronic monitoring network that would alert rangers as soon as an unauthorized person enters the park. To do this, four towers were positioned around Lake Itezhi Tezhi, forming a continuous “curtain” of surveillance. From these towers, networked infrared cameras powered by solar electricity scan all entryways into the park and send a live feed to a central control building staffed 24 hours a day by anti-poaching units.

Two of the four sites are isolated in areas populated by elephant, hippopotamus, baboons and monkeys. Also a threat are the numerous insects and spiders that infest any man-made structure on the islands. The enclosures that house the equipment are designed with natural ventilation to ensure cooling with fine mesh gauze to keep spiders, bees, bats, wasps and other insects from making their nests within the equipment enclosures. Access to the furthest site entails a three-hour boat ride and an escorted walk into the game area.

To operate in these conditions, equipment must be able to withstand both extreme elements and physical assaults from native wildlife. Rangers must be able to monitor systems, and send and receive information, remotely. A Zimbabwe-based renewable energy company developed and installed the solar energy system tasked with keeping the system running. While there is electricity in the park—the Kafue River empties into Lake Itezhi Tezhi, a man-made reservoir that generates hydroelectric power for the park and surrounding villages—the surveillance hardware is in remote locations, requiring on-site generation. 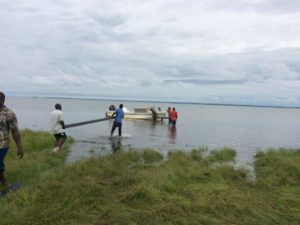 “Morningstar components were an obvious choice being readily available and dependable in remote bush applications at reasonable cost,” said the installer.

“Projects such as this empower Game Rangers with more effective surveillance during their anti-poaching tasks, resulting in wildlife preservation for future generations,” he added.

There are over 1,600 off-grid inverters out there now in our power class, and coming out with 6 more means we had to make them exceptional. They are– the polar opposite of “me too” thinking, designed for “mission-critical” industrial applications.